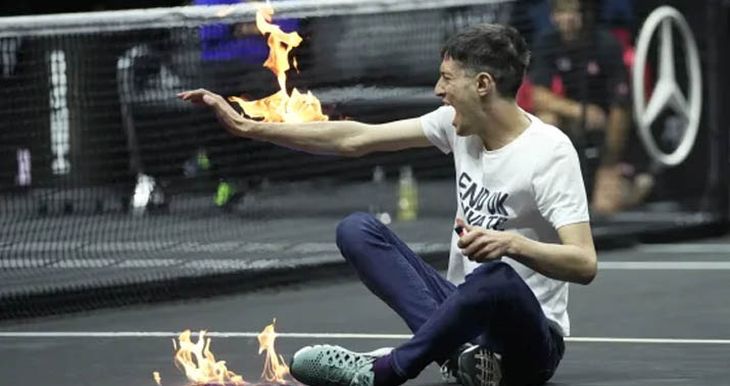 A UK climate protester literally put his skin in the game when he ran onto a tennis court before Roger Federer’s final match at O2 Arena in London and set himself on fire. That was surely meant as a sign of his absolute commitment to the cause but apparently no one had told him that fire is hot.

Wearing a white T-shirt reading “End UK Private Jets,” the protester, a young man, appeared on the court during the afternoon singles match between Stefanos Tsitsipas and Diego Schwartzman. Sitting down near the net on Schwartzman’s side of the court, the man briefly set fire to his right arm, and to the court, as security officials ran toward him.

The protester appeared to immediately regret the decision to set fire to himself, and quickly put out the flames with his left hand while a small fire burned on the court next to him. A staff member smothered the on-court fire with a suit jacket while the protester calmly waited to be removed.

Once the fire was out, and with Schwartzman keeping a safe distance, three security guards carried the man off the court to a chorus of boos from the crowd.

The whole thing only lasted about 30 seconds and accomplished nothing.

Here’s the moment the protester realized he’d made a terrible mistake.

Who knows what this guy was thinking but his t-shirt may have been a reference to the travel of some of the top players, including Federer:

Federer and other leading tennis stars including Novak Djokovic were seen to arrive in London earlier in the week using private jets, with the Laver Cup Twitter account sharing pictures of the two multiple Grand Slam champions stepping off private planes earlier in the week. Federer also has a long-standing sponsorship deal with Netjets, the ‘world’s leading private jet company’, according to their website.

The protester has been identified as Kai, aged 20. According to the group that he is affiliated with, Kai prefers “they/them” pronouns.

Here they are earlier today explaining the point of this stunt.

His spiel is extreme but not quite as extreme as whoever wrote that tweet. Humanity is not facing global extinction. Well, I mean there’s the sun becoming a red giant, random nearby hypernovas and the heat death of the universe, but Kai isn’t likely to see any of those. More to the point, private jets are not going to result in human extinction or the end of the world. Even Vox has rejected that sort of junk argument.

…climate change is going to be bad, and it will hold back humanity from thriving as much as we should this century. It will likely cause mass migration and displacement and extinctions of many species.

What it won’t do, however, is make the Earth unlivable, or even mean that our children live in a world poorer than the one we grew up in. As many climate scientists have been telling us, the world is a better place to live in — especially for people in lower-income countries — than it has ever been, and climate change isn’t going to make it as bad as it was even in 1950.

Anyway, I hope Kai didn’t injure himself too seriously (didn’t seem like he did) and I hope he finds a more productive way to make the world a better place. Setting yourself on fire is not it.