The 1540 Megadrought in Europe: The River Rhine ran dry, fires burned, & no one blamed coal or beef steak

Despite the news that the River Rhine is in a crisis due to “climate change” it has happened before, and many times.  There are rocks in European rivers called Hunger Stones where people carved messages to mark the depth of the pain in the droughts. There are historical records of the Rhine drying up in spots so badly that people could walk across it with dry feet. In 1540 wells ran dry that had never run out of water. The whole decade was horrible, and in 1835 in Transylvania people were so hungry they ate dead cats and dogs.

History is being actively wiped out because it never serves the narrative.  Megadroughts were longer and deeper in the last 2000 years.  The whole decade of the 1530s was filled with drought but the worst drought was 1540.

Hell on Earth: the European drought of 1540

In the summer of 1540, the people searched ever more desperate for drinking water. Even a meter and a half under the normal water table in Switzerland was not a drop of water to be found, noted Hans Salat at the time. Spring and upwellings that had never faltered now lay dry. Others were strictly guarded and water was drawn according to a time schedule. Thousands of people along the River Ruhr died of poisoning from dirty water.

These messages carved in hunger stones go back as far as 1417.  The message was essentially “If you see me, weep”. Famine was coming. 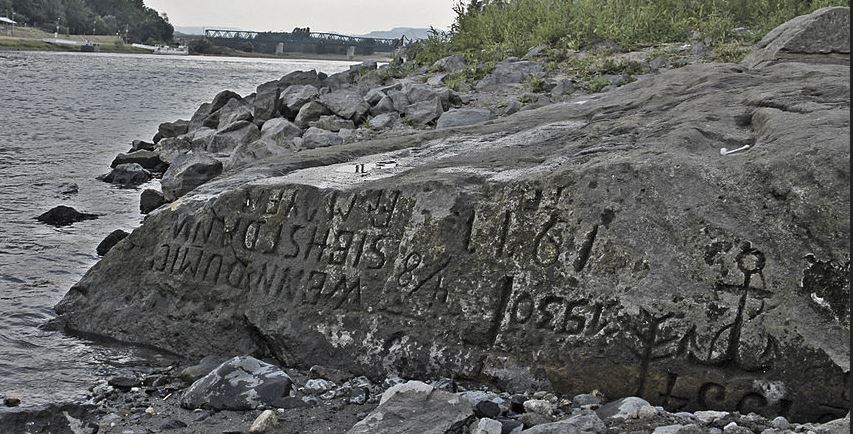 View of the Hunger Stone on the Elbe in Děčín. .

The stone marks the low water levels of the Elbe with different dates. The oldest legible inscription dates from 1616. Older inscriptions (1417, 1473) were rubbed off over time by ships at anchor. The stone is also inscribed with the saying “Girl, do not cry and do not complain, when it is dry, spray the field”. This saying was probably made in 1938 by the pump manufacturer Frantisek Sigmund. The saying was based on the older saying “If you see me, then cry”. The Deciner Hungerstein is one of the oldest hydrological monuments on the Elbe.

Even climate scientists hold 1540 in awe:

Eleven months without rain, a million deaths – in 1540, a previously and since unprecedented drought devastated all of Europe. Can she repeat herself?

The result: For eleven months there was almost no rain, the temperature was five to seven degrees above the normal values ​​of the 20th century, the temperature must have climbed above 40 degrees in midsummer. Countless forest areas in Europe went up in flames, acrid smoke obscured the sunlight, and not a single thunderstorm was recorded for the entire summer of 1540.

July brought such a terrible scorching heat that the churches sent out prayers of supplication while the Rhine, Elbe and Seine could be waded through without getting wet. Where water still flowed, the warm broth turned green, and fish floated in it keel up. The level of Lake Constance dropped to a record level, and Lindau was even connected to the mainland. The surface water soon evaporated completely, the floors burst open, some drying cracks were so large that a foot could fit in them.

And the groundwater dropped too: in the Swiss canton of Lucerne, desperate people tried to dig for water in a river bed, but found not a single drop even at a depth of one and a half meters. Christian Pfister therefore estimates that only a quarter to a maximum of a third of the usual amount of rain came from the sky that year.

In Würzburg in 1540 the grapes were ripe early but dried up and raisin-like, so the winegrowers pressed them anyway and invented the “late harvest”. It became a legendary harvest and four bottles still remain unopened. Some wine experts opened one of the batch in 1961 when it was 421 years old. They remarked on the flavour with some amazement but said it lasted only a few moments before it oxidized and “became vinegar in our glasses”.

The 1540 summer precipitation totals in Europe expressed as percentage deviations (× 100) from the 1961–1990 mean; (b) summer Palmer Drought Severity Index for 1540 in Europe according to OWDA . (Brázdil et al)

Fires, famine, dust, water mills ran out of water, and people walked across some parts of the Rhine

Severe heat and drought in summer and autumn afflicted Silesia, where there was practically no rain for 6 months. Many streams dried up and the water in the River Oder turned green. There were frequent forest fires and livestock suffered from hunger and thirst (Büsching, 1819). Similarly, severe heat, forest fires, poor harvest, shortages, and famine were mentioned for Bohemia, Silesia, and Lusatia (Gomolcke, 1737). In Greater Poland, summer and autumn were also very dry; it did not rain until the beginning of winter. Rivers were exceedingly low, brooks, ponds, and wells dried up and the land was desiccated to dust (Rojecki et al., 1965).

… water levels were low everywhere; it was even possible to ride or walk across the River Rhine. — Brazdil et al

Best horror story goes to the 1535 famine in Transylvania

So great was the hunger that people of both sexes and all ages lost their minds, walking around almost naked and consuming “unclean things”. Bethlen also mentioned cannibalism. Thousands of people starved to death. Corpses could be encountered on the streets, their mouths full of grass (Bethlen, 1782). In Făgăraş, desperate poor people turned to eating dead dogs and cats (Trauschenfels, 1860).

When streams and rivers fell or dried out, it became difficult or impossible to grind grain in regions that relied upon water mills. For example, the dry summer of 1536 forced the Erfurt municipality to consider the creation of a Rossmühle, a mill powered by horses (von Falckenstein, 1738). — Brazdil et al

The driest decade of the past 5 centuries

…during the extremely hot, dry summer of 1540 in the Netherlands, the water levels in rivers were so low that people could cross substantial rivers such as the Lys, the Scheldt, the Meuse, and the Rhine with “dry feet” (Descamps, 1852).

This “Drought Atlas” is largely based on tree rings, with all their confounded flaws, but at least it’s the same proxy all the way through. No one segued it into the modern record and pretended that trees were like glass thermometers. And at least these tree rings have some other documentary support.