Marc Morano: We're shutting down our domestic energy which we were wanting to dominate for the first time since Harry Truman under Trump to now more reliance on China and more reliance on Russian mining of nickel. This is a disaster but it's exactly in line with what Economic Forum, the United Nations, and the World Health Organization, -- they have decided they want a weakened America to be collapsed and then rebuilt in the globalist image with massive Chinese influence.

Joe Piscopo: You're on fire Marc Morano. Let's continue this next week my brother, please have a great Fourth of July and thank you so much. 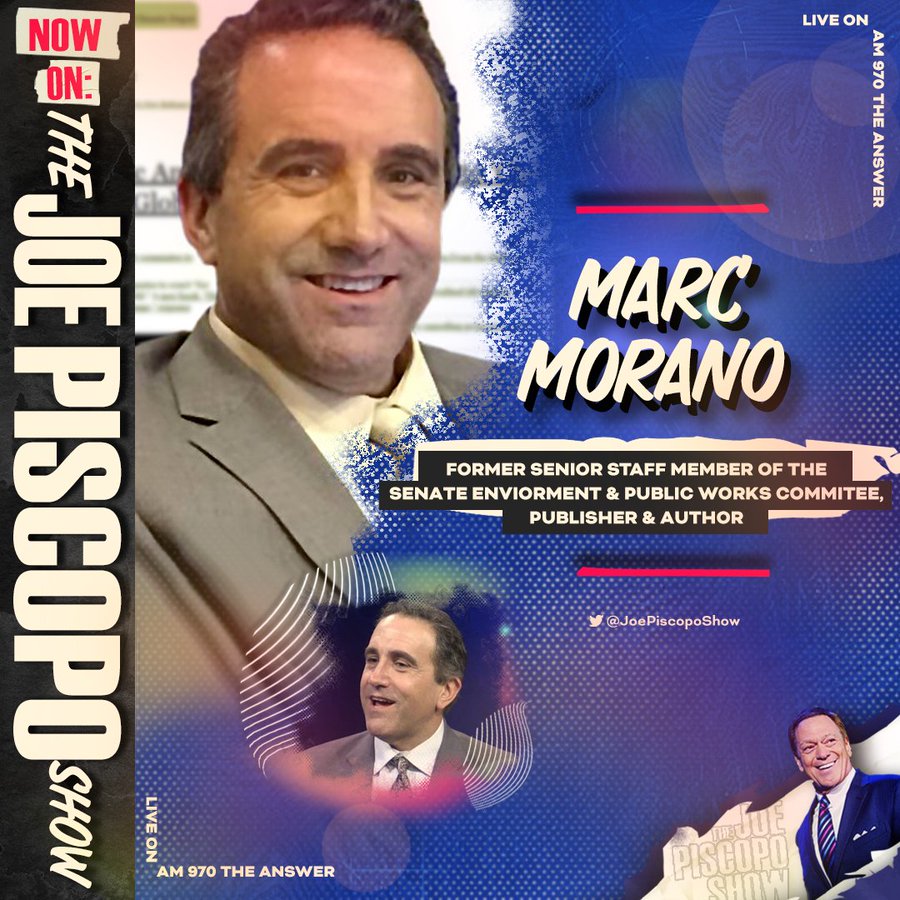 Joe Piscopo: You know what I’m a God-fearing Italian American and I can’t help but speak the truth. So let me reach out. Marc Morano, former senior staff member of the Senate Environment and Public Works Committee, publisher of ClimateDepot.com, author of a vital must-read. If you want to buy somebody’s book you want to go online, Amazon checkout Green Fraud. Marc Morano, welcome back to the show. Brother. Great to have you with us.

Marc Morano: Hey, thank you. So happy to be here today.

Joe Piscopo: Well, you know, we appreciate anybody who speaks it was bold enough to speak to truth we so appreciate it. And that’s all we’re trying to do. So whatever with the Supreme Court ruling on the EPA, I love this. They kind of smacked down the EPA a little bit that. Listen, I gotta do this caveat Marc, like a, you know, a public service announcement. Everybody wants clean air. We were just talking about it. You know, I think we cleaned up the air considerably along  the Ohio River you know, with all the coal plants so we’re on our way to clean air but then they get carried away now they’re like, I believe that like, stopping people in, I believe Holland and or the Netherlands or the Iran the Netherlands. They’re not to grow cattle because of nitrogen emissions. I mean, they’re gonna go too far. So it was good that the Supreme Court smacked down the EPA a little bit is that good news, Marc.

Marc Morano: It’s great news, because what’s happened here is in 2007, I was working for the Senate Environment Public Works Committee. When this happened the Supreme Court back then without the three Trump justices, literally ruled that carbon dioxide could be regulated as a pollutant under the Clean Air Act  — and there are many versions of clean air act on back early 70s, that were updated.

This 2007 SCOTUS ruling was shocking because humans inhale oxygen, we exhale carbon dioxide. This was the US Supreme Court saying that human breast could be regulated as a toxic and of course, a year later, Obama does exactly that. They regulate it. And what this was was a political maneuver was all about the legislative bypassing democracy bypassing Congress. President Obama tried to get a climate bill to Congress. You know why he failed. He got it to the House after to try and Nancy Pelosi bribed House members who didn’t want to vote for it. But Sen. Harry Reid never submitted a vote in the Senate because of nine Liberal Democratic senators. This was back in Obama’s first term, his climate bill, and they would never support it and people like Al Franken bailed out of support because it would harm their economies and their energy. sector.

So this is what Obama did. We don’t need a stinking democracy. We’re going to do all this to the regulatory body. We’re going to declare carbon dioxide a pollutant and we’re going to regulate it anyway. We want we need a vote a Congress we need legislation on the hearings. This is what Biden has continued. This is what happened essentially in COVID. We didn’t have votes on lockdowns and mask mandates and vax mandates —  this was imposed by an unelected bureaucracy, public health in this case, destroying American energy and industry through the bureaucracy. Based on this ruling of the Supreme Court, they reversed it yesterday. …

Marc Morano: …Prince Charles in England now backing and I’m not making this up face masks for cows to trap their burps. And there’s other people making devices for the other end because they’re worried about methane is a greenhouse gas, which is just the point now of absurdity. But here’s the key. Politico, in an article reported that China is buying up US agriculture, China’s buying up meat processing. Congressmen are worried of a Chinese farmland monopoly, but China has competition. Bill Gates is competing with China and is now passed them as the largest single farmland owner in America. This is according to NBC News. His mission is to make us eat fake meat vegetable oil processed “meat”. Gategs is pushing this and also the World Economic Forum and the UN is promoting eating bugs. So Bill Gates is largest American farmland owner with a mission to make eating meat rare and expensive. And meat prices have skyrocketed along with everything else. But this is all part of an agenda of reshaping or resetting our world.

Marc Morano: Well, you know, here’s the thing about China. We don’t 100% know but here’s what we do know they want — control. They’re doing this in Africa. They’re doing this in South America, they come in they erect seaports because the country is can’t afford to pay them, they lease it back to China for 50 years. China then controls the ports, they control the economy or the labor market. And this is what the seeking this is what China is doing. They’re seeking to control every apsect of the economy.

What do they do with that control? They have things like social credit systems, they impose snap downs on huge cities like Shanghai when they decree a public health threat and they kill your pets. It is a very scary world we’re entering with Chinese domination of first of all, Africa, South America. And now, of course, the United States. … We …literally gave our economy over a manufacturing base over to China and now the green agenda is making us even more dependent on China’s rare Earth mining based on slave labor, under aged kids in Africa. 90% of the U.S.’s solar panels come from China. We’re shutting down our domestic energy which we were wanting to dominate for the first time since Harry Truman under Trump to now more reliance on China and more reliance on Russian mining of nickel. This is a disaster but it’s exactly in line with what Economic Forum, the United Nations, and the World Health Organization, — they have decided they want a weakened America to be collapsed and then rebuilt in the globalist image with massive Chinese influence.

Joe Piscopo: You’re on fire Marc Morano. Let’s continue this next week my brother, please have a great Fourth of July and thank you so much.