“The calving will not directly affect sea level, because the ice shelf was already floating, much like an ice cube in a glass of water,” Dr. Galton-Fenzi said.

Meteorologist Watts: Claims of ‘unprecedented’ high temps in Arctic & Antarctic are NOT based on actual temperature reading but ‘a model simulation’ from ‘a single day weather event’

Scientists Find Antarctica Is Rapidly Cooling And Any Ice Sheet Melt Is Not Due To CO2, But Natural - In a review of the scientific literature, Lüning et al. 2019 report Antarctica as a whole has undergone a cooling trend in recent decades.

Evidence That Antarctica Is Cooling, Not Warming

"Antarctic ice shelf nearly the size of Los Angeles collapsed as temperatures soared to 40 above normal"https://t.co/dGiqpe9FfH

This is how “Climate Change” can never “lose”…

Antarctica just had its COLDEST winter ON RECORD (a development which the news media strategically downplayed/diminished), and now somehow they are are evidence of… Global Warming?!!#TailsTheyWinHeadsWeLose https://t.co/JqZnS5g8Cg pic.twitter.com/VDhlL7QW62

Tony Heller of Real Climate Science: “Climate alarm is based on ambulance-chasing commonplace events, making up fake statistics about them, and never permitting an honest scientist to weigh in on the discussion.”

Climate experts say glacial ice in East Antarctica has been stable throughout human history until a heatwave last week.

“An ice shelf the size of New York City has collapsed in East Antarctica, an area long thought to be stable and not hit much by climate change, concerned scientists said.

The collapse, captured by satellite images, marked the first time in human history that the frigid region had an ice shelf collapse.” 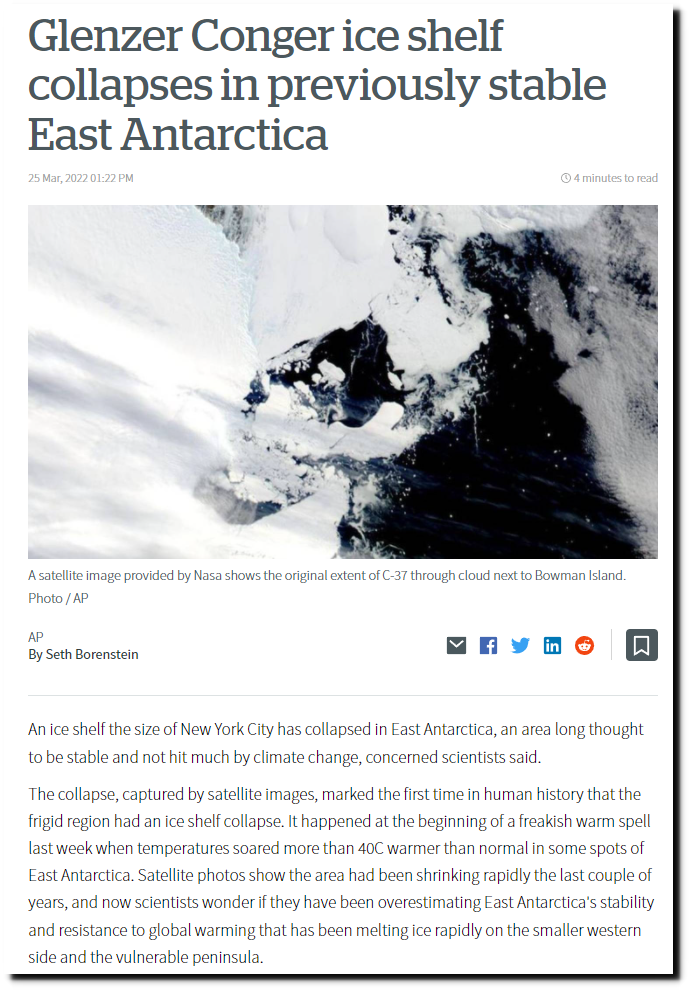 Eight years ago, climate experts got trapped by icebergs calving off of ice shelves in East Antarctica. 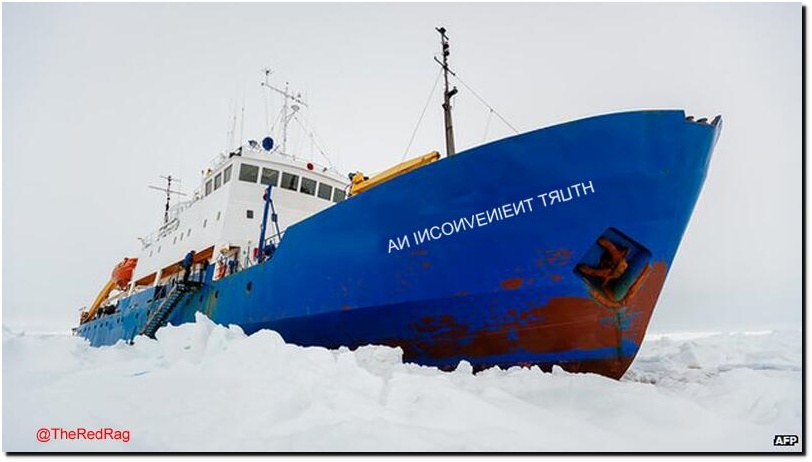 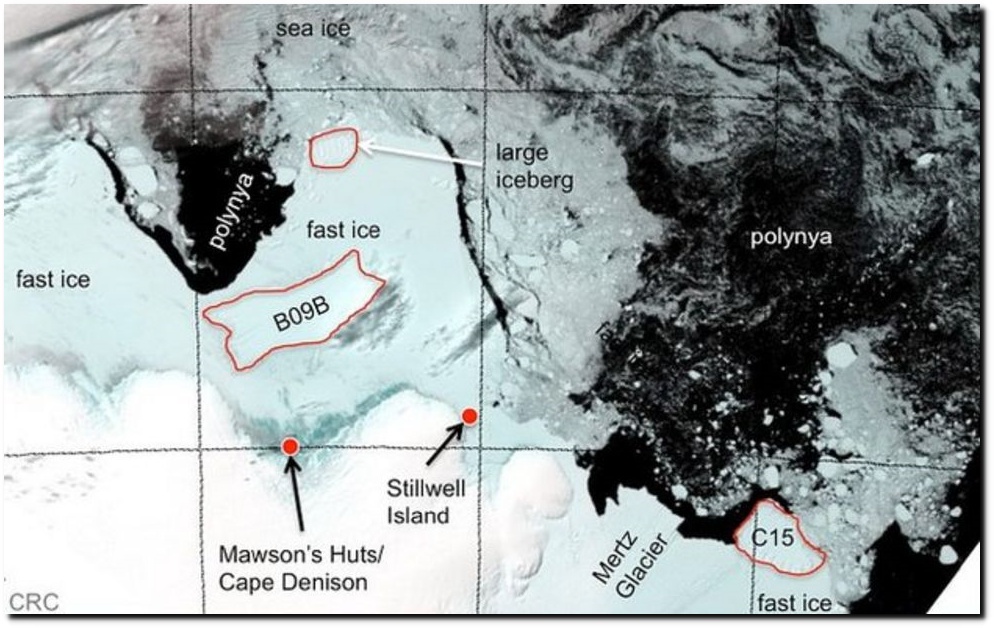 Why did Antarctic expedition ship get stranded in ice? – BBC News

During last week’s “heatwave” temperatures warmed up to -12C.

Peter Neff, a glaciologist and assistant research professor at the University of Minnesota, said that to see even a small ice shelf collapse in East Antarctica was a surprise.

“We still treat East Antarctica like this massive, high, dry, cold and immovable ice cube,” he said. “Current understanding largely suggests you can’t get the same rapid rates of ice loss [as in West Antarctica] due to the geometry of the ice and bedrock there.”

“This collapse, especially if tied to the extreme heat brought by the mid-March atmospheric river event, will drive additional research into these processes in the region.” 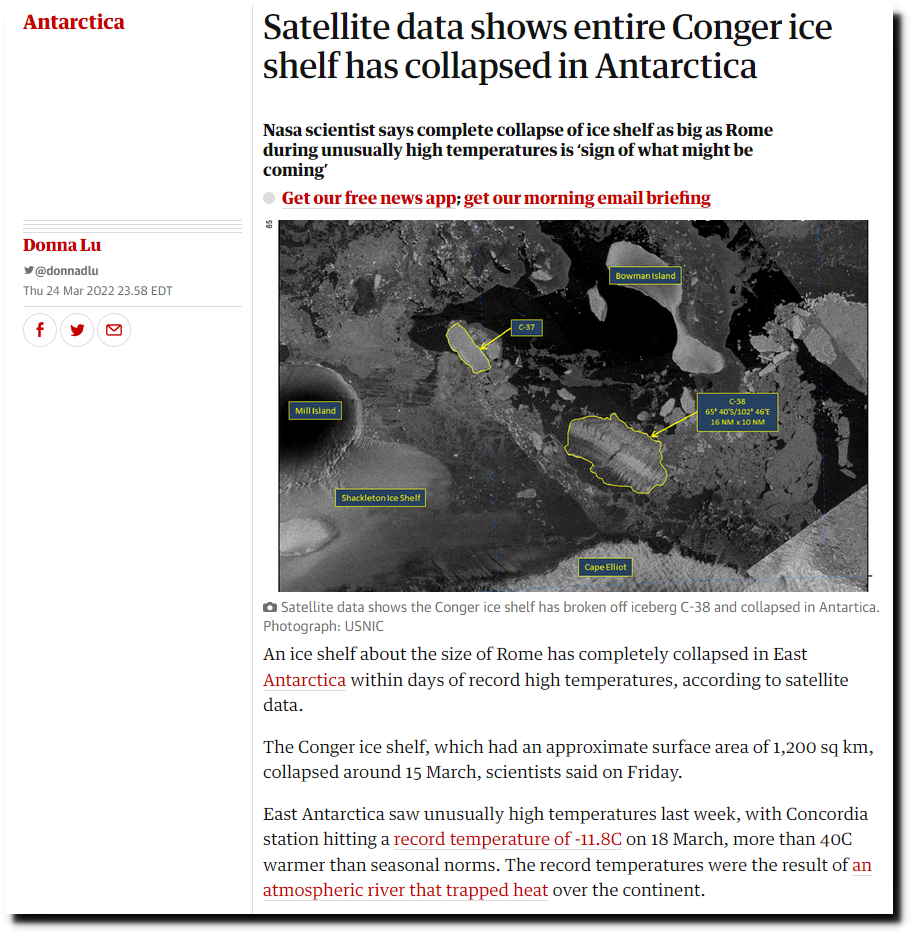 So according to climate experts, history began after the year 2014 and the melting point of ice is now -12C. Icebergs break off East Antarctica regularly.

““The calving will not directly affect sea level, because the ice shelf was already floating, much like an ice cube in a glass of water,” Dr Galton-Fenzi said.” In 2009, CNN reported on a giant iceberg approaching Australia.

“The iceberg, measuring 140 square km cleaved off an ice shelf nearly 10 years ago 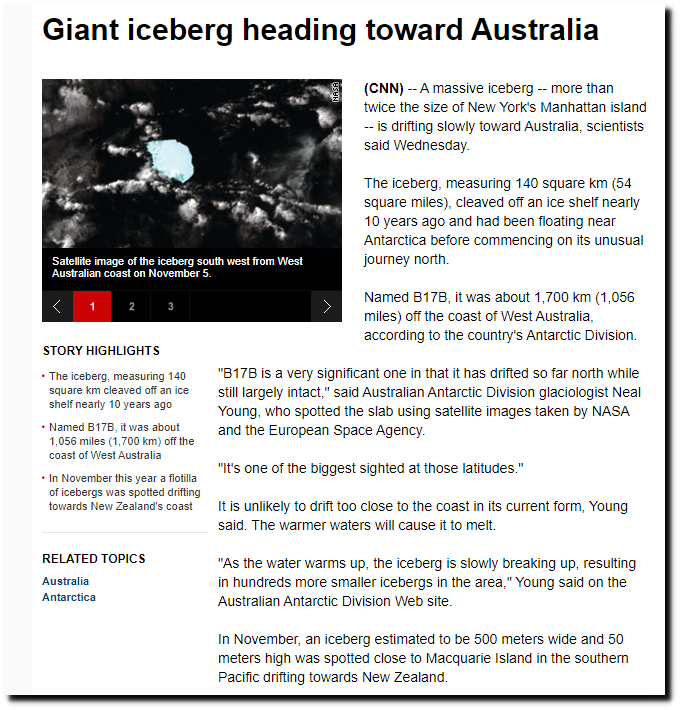 A ‘heat wave’ and snowfall: Why researchers are puzzled by Antarctica’s recent weather – The alarmist Guardian’s ‘climate disaster’ turns out to be ‘climate mitigation’, due to the massive snowfall. A so-called heatwave where temperatures reached a chilly 10 degrees Fahrenheit (-12 Celsius), seems to have fooled a lot of people. The Guardian speculates that ‘climate breakdown could be accelerating’, but seeing what you wanted to see doesn’t always work.
– – –
While researchers say it’s too early to know what role, if any, climate change plays here, the event has their attention because it’s so extreme, says NBC News.

TEMPERATURES IN ANTARCTICA TUMBLE BACK BELOW MULTIDECADAL AVERAGE, AS SATELLITE DATA REVEALS 40 YEARS OF COOLING AND ICE EXPANSION

Excerpt: The Conger ice shelf had an approximate surface area of 1,200 sq km, meaning it took up just 0.0086% of Antarctica’s 14 million sq km ice sheet. Even NASA earth and planetary scientist Dr Catherine Colello Walker says this is no big deal, admitting that the Conger ice shelf was relatively small: “It won’t have huge effects,” she said. Our planet’s ice should be permitted to move, shift and melt without it being painted as an unmitigated disaster, and every minuscule finger nail that happens to snap off of an ice sheet shouldn’t be regarded as the EOTW or a “sign of things to come”.

Official data reveals that East Antarctica, which covers two thirds of the South Pole, has cooled 2.8C over the past 4 decades, with West Antarctica cooling 1.6C. It stands that only a tiny slither of Antarctica (the Antarctic Peninsula) has seen any warming –statistically insignificant warming, at that– but there are no prizes for guessing which region the MSM focuses on.