Fox News: Fears of gas price spike if Russia invades Ukraine: ‘Biden has made us dependent on Russia, OPEC, and China’

Feb. 17, 2022 – 4:12 – ClimateDepot.com publisher Marc Moreno slams the Biden administration for making the US no longer energy independent and remembers Rush Limbaugh one year since his death

Fox News anchor Carley Shimkus:  It’s been a year since Rush Limbaugh died and you started your career working for him. I can’t believe it’s been one year. What are your reflections on him this morning? How are you remembering him?

Marc Morano: Rush Limbaugh is probably the single greatest political influence for most of America. He was the guy who talked to tens of millions of listeners every single day and he set the political narrative. I was outed by my fellow members of the media. I was fully credentialed reporter with White House and Capitol Hill credentials, but fellow reporters in DC found out I was working for Rush Limbaugh, and these reporters would out me. I remember John Ritter, the actor who a reporter whispered in his ear that I was working for Rush Limbaugh and warned the actor not to talk to me. And John Ritter came over to me and ended up challenging Rush Limbaugh on camera. Rush ended up on Ritter’s  TV show, (Hearts of Fire). I saw the original cancel culture in Washington DC as the Rush Limbaugh TV reporter. He called me ‘Our Man in Washington.

I don’t know this hole that Rush Limbaugh has left. I don’t know that it can be filled. It’s been filled by a bunch of a lot of different diverse voices. But there’s no one voice that can ever replace Rush. Fox News anchor Carley Shimkus: “Well, we’re going to be remembering him all morning long. And Ainslie sat down with his wife and that interview. Great interview is going to air later today on Fox and Friends. So be sure to tune into that as well. Marc, thank you so much for joining us. We appreciate it.

Marc Morano comment: I extend my prayers for Rush and his family and the EIB network. Rush was an American legend and our national treasure. RIP Rush! You will be missed for generations. 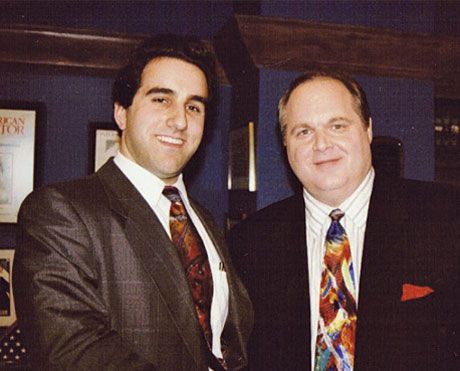 Rush was my media and political mentor. Working for Rush Limbaugh’s TV show, I learned a lifetime of knowledge about Washington politics and the media in those four years back in the 1990s. Working, watching and listening to Rush for decades led me to earn my degree from Limbaugh’s institute of advanced conservative studies. RIP Rush.

Rush Limbaugh praised Climate Depot’s Marc Morano: “Morano’s probably single-handedly, in a civilian sense, the guy (other than me, of course) doing a better job of ringing the bells alarming people of what’s going on here.” – November 20, 2009