No Evidence That Thwaites Glacier in Antarctica Is about to Collapse 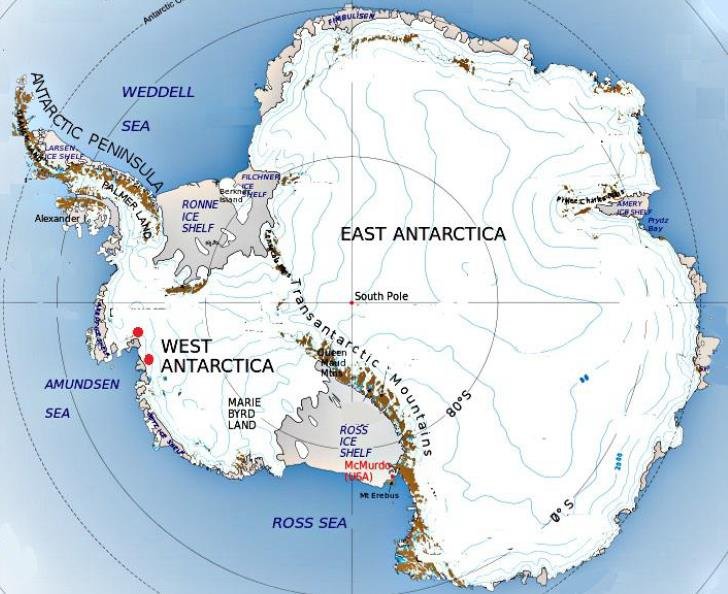 Contrary to recent widespread media reports and dire predictions by a team of earth scientists, Antarctica’s Thwaites Glacier – the second fastest melting glacier on the continent – is not on the brink of collapse. The notion that catastrophe is imminent stems from a basic misunderstanding of ice sheet dynamics in West Antarctica.

The hoopla began with publication of a research study in November 2021 and a subsequent invited presentation to the AGU (American Geophysical Union). Both postulated that giant cracks recently observed in the Thwaites Eastern Ice Shelf (pictured to the left) may cause the whole ice shelf to shatter within as little as five years. The cracks result from detachment of the ice shelf’s seaward edge from an underwater mountain about 40 kilometers (25 miles) offshore that pins the shelf in place like a cork in a bottle.

Because the ice shelf already floats on the ocean, collapse of the shelf itself and release of a flotilla of icebergs wouldn’t cause global sea levels to rise. But the researchers argue that loss of the ice shelf would speed up glacier flow, increasing the contribution to sea level rise of the Thwaites Glacier – often dubbed the “doomsday glacier” – from 4% to 25%. A sudden increase of this magnitude would have a devastating impact on coastal communities worldwide. The glacier’s location is indicated by the lower red dot in the figure below.

But such a drastic scenario is highly unlikely, says geologist and UN IPCC expert reviewer Don Easterbrook. The misconception is about the submarine “grounding” of the glacier terminus, the boundary between the glacier and its ice shelf extending out over the surrounding ocean, as illustrated in the next figure.

The grounding line of the Thwaites Glacier, shown in red in the left figure below, has been retreating since 2000. According to the study authors, this spells future disaster: the retreat, they say, will lead to dynamic instability and greatly accelerated discharge of glacier ice into the ocean, by as much as three times.

As evidence, the researchers point to propagating rifts on the top of the ice shelf and basal crevasses beneath it, both of which are visible in the satellite image above, the rifts as diagonal lines and the crevasses as nearly vertical ones. The crevasses arise from basal melting produced by active volcanoes underneath West Antarctica combined with so-called circumpolar deep water warmed by climate change.

However, as Easterbrook explained in response to a 2014 scare about the adjacent Pine Island glacier, this reasoning is badly flawed since a glacier is not restrained by ice at its terminus. Rather, the terminus is established by a balance between ice gains from snow accumulation and losses from melting and iceberg calving. The removal of ice beyond the terminus will not cause unstoppable collapse of either the glacier or the ice sheet behind it.

Other factors are important too, one of which is the source area of Antarctic glaciers. Ice draining into the Thwaites Glacier is shown in the right figure above in dark green, while ice draining into the Pine Island glacier is shown in light green; light and dark blue represent ice draining into the Ross Sea to the south of the two glaciers. The two glaciers between them drain only a relatively small portion of the West Antarctic ice sheet, and the total width of the Thwaites and Pine Island glaciers constitutes only about 170 kilometers (100 miles) of the 4,000 kilometers (2,500) miles of West Antarctic coastline.

Of more importance are possible grounding lines for the glacier terminus. The retreat of the present grounding line doesn’t mean an impending calamity because, as Easterbrook points out, multiple other grounding lines exist. Although the base of much of the West Antarctic ice sheet, including the Thwaites glacier, lies below sea level, there are at least six potential grounding lines above sea level, as depicted in the following figure showing the ice sheet profile. A receding glacier could stabilize at any of these lines, contrary to the claims of the recent research study.