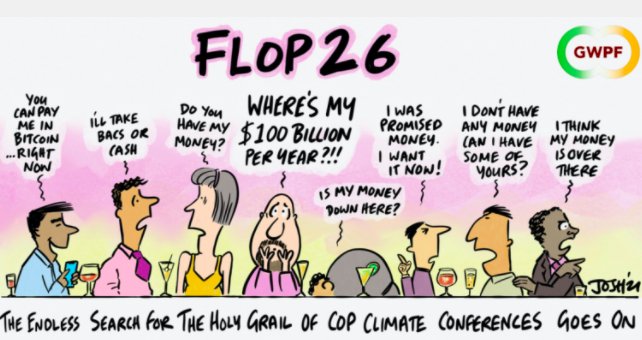 As Europe’s Net-Zero ahttps://climatechangedispatch.com/flop26-u-n-chief-warns-climate-summit-at-risk-of-failure/genda is causing industrial havoc and energy prices are going through the roof, the UN chief has warned that COP26 is heading for the rocks.

Warnings about a Cop-flop are no news to interested observers who have been following our COP26 coverage in recent months.

In fact, it has been evident for years that the huge and growing energy demands by China, India, and other emerging nations and the Net-Zero agenda are incompatible and insurmountable.

This international deadlock has been inherent from the very start of UN climate summits almost 30 years ago and is not going to be overcome anytime soon.

In any case, Europe’s severe energy crisis is a stark warning to the world what happens when collective hysteria and green utopianism cancel reason, threatening the continent with industrial devastation and a winter of discontent and upheaval.

As a result, we can expect COP26 to follow the normal COP ritual, culminating in a lame compromise that will allow Joe Biden and Boris Johnson to claim to have saved the climate summit from near collapse while enabling China and much of Asia and Africa to burn fossil fuels for decades to come. Via Reuters:

UNITED NATIONS, Sept 16 (Reuters) – United Nations chief Antonio Guterres said a critical meeting on climate change later this year in Scotland is at risk of failure due to mistrust between developed and developing countries and a lack of ambitious goals among some emerging economies.

The U.N. COP26 conference in Glasgow aims to wring much more ambitious climate action and the money to go with it from participants around the globe. Scientists said last month that global warming is dangerously close to spiralling out of control.

“I believe that we are at risk of not having a success in COP26,” Guterres told Reuters in an interview at U.N. headquarters in New York on Wednesday. “There is still a level of mistrust, between north and south, developed and developing countries, that needs to be overcome.”

Guterres and Britain’s Prime Minister Boris Johnson will on Monday host a meeting of world leaders on the sidelines of the annual high-level week of the U.N. General Assembly in a bid to build the chances of success at the climate conference, being held from Oct. 31 to Nov. 12.

“My objective and the reason why we are convening a meeting on Monday is exactly to build trust, to allow for everybody to understand that we all need to do more,” Guterres said.

“We need the developed countries to do more, namely in relation to the support to developing countries. And we need some emerging economies to go an extra mile and be more ambitious in the reduction of air emissions,” he said.

Monday’s meeting, which will be both virtual and in-person, will be closed to allow for “frank and open discussions” on how to deliver success in Glasgow, said a senior U.N. official, speaking on condition of anonymity.