I say this in all seriousness. Dr. Mann is brilliant. I like a lot of his work, But when he gets on CNN and says what he says, my wheels start spinning.

In this case, understanding and putting together pieces of the puzzle help with explaining the situation and may give us a heads up on the future.

In blaming AGW for the catastrophe of Ida he may have helped with another big clue to the winter, So if this turns out right, everyone should write PSU and thank him.

First of all, far more important as far as climate implications go is that it took close to 10 days for a storm to cross the Atlantic to become a major hurricane for about 2 days,  WHILE THE WORLDS NUMBER ONE AREA FOR TROPICAL CYCLONE PRODUCTION AND CONTRIBUTION TO THE GLOBAL ENERGY BUDGET FROM THE TROPICS HAD NO TYPHOONS IN AUGUST FOR THE 1ST TIME ON RECORD( BACK TO 1944).

He should know and understand what a huge event that is. Also with the exception of Larry in the middle of nowhere, the 4 hurricanes this year have been relatively short-lived. That is another story for another time… they are not developing fast nor are long tracked.

But lets get back to what was shown above.  As usual there was no mention and no perspective in Mann’s appearance.

We just had an August tandem, Henri and Ida right?

But while they hammered one area with rain, and in this case, the populated areas around NYC, look at this. 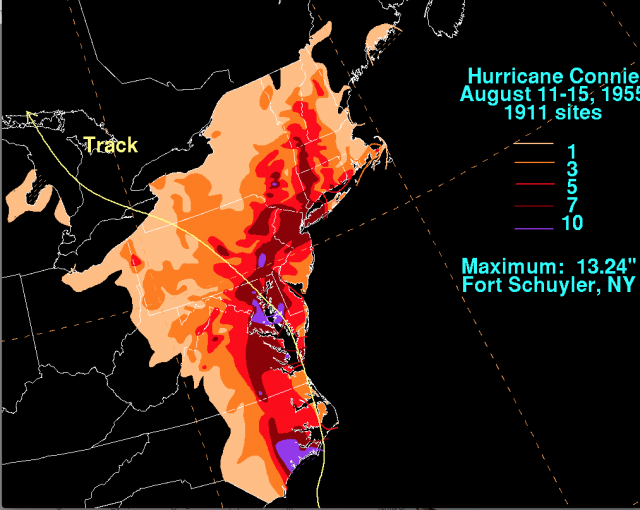 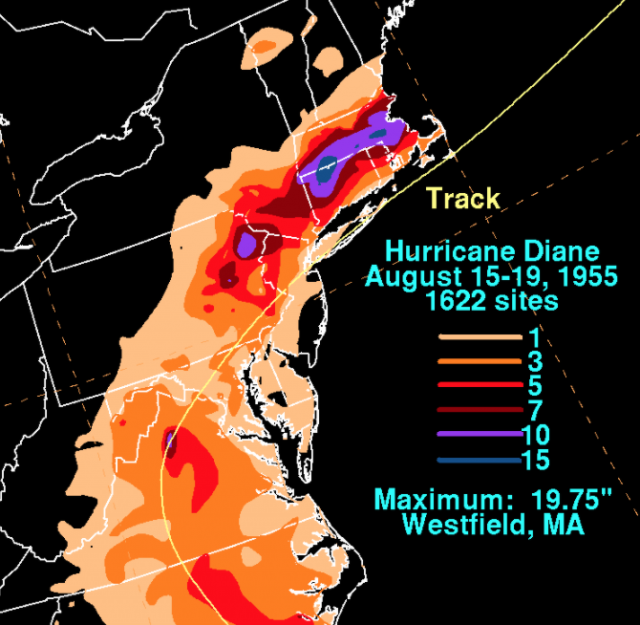 Funny story I was at a wedding this weekend and my dad was saying, Joe, if any of these people say anything about climate change say you have 2 words for them

By the way later that hurricane season Hurricane Ione! 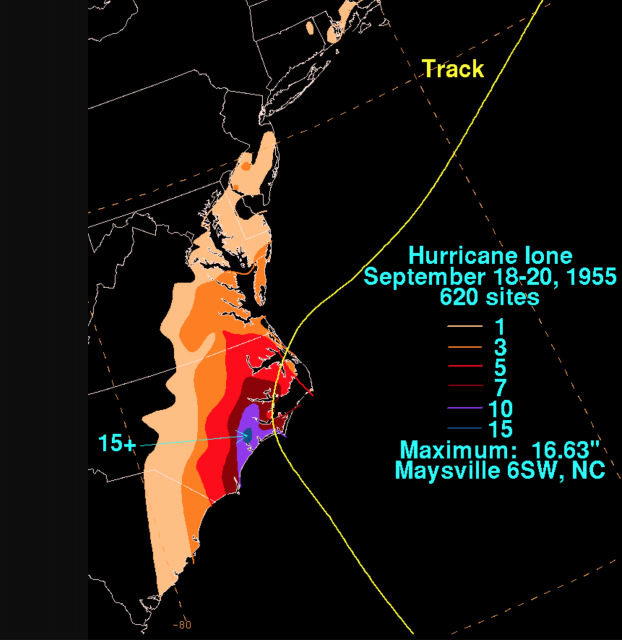 So you can see how widespread these were.

But then I started to dig further, If we want to play the tropical game, the shutdown of the western Pacific with no typhoons in August was far more impressive than a hurricane that was a major for. 2 days, but took almost a week to even develop ( so did Camille, Michael, Etc btw ). But guess what year was the least for typhoon development in the Pacific in August 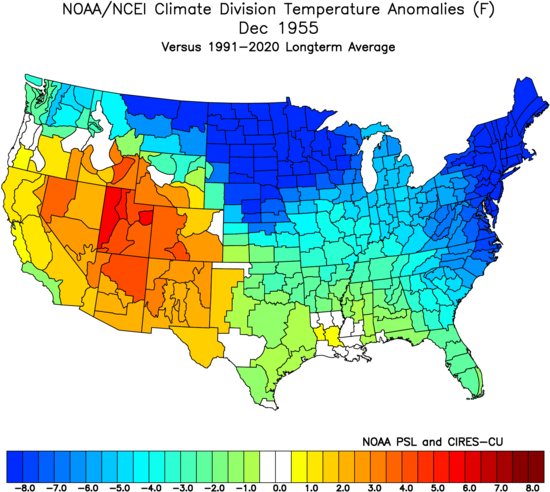 Now remember this I put out for you on May linkage to hurricane seasons and the following winters?

In the writeup on the 1955 hurricane season, available here

( side note to all climate alarmist, you should read every one of these for 2 reasons 1) you are obviously unaware of the wealth of information available on hurricanes and past weather. 2) It shows you one of many reasons I am a big fan of NOAA.  The amount of research and information they have done is mind-boggling.   It can get in the way of my bible reading, and I have to be careful not to put government before God ( smile will ya)) 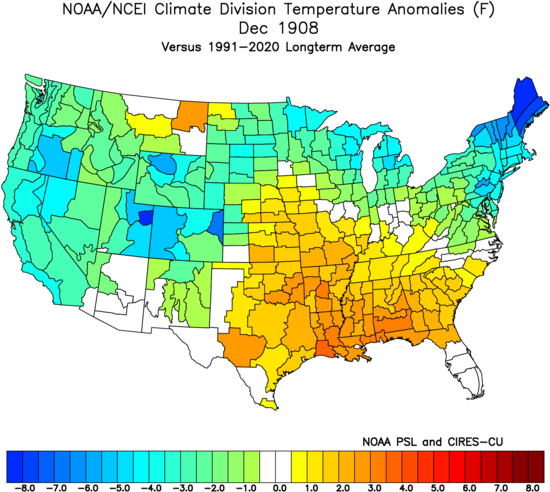 hmm cold slicing across the north 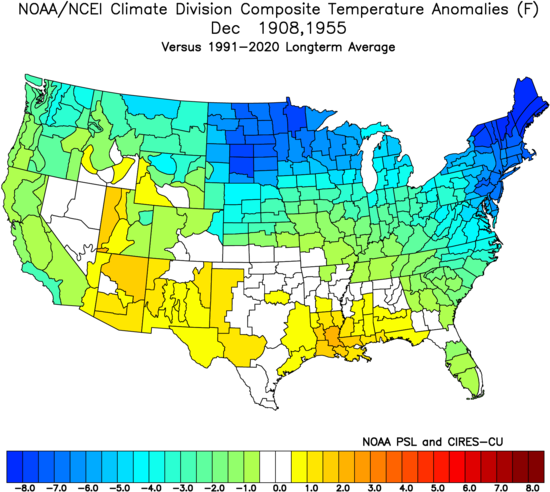 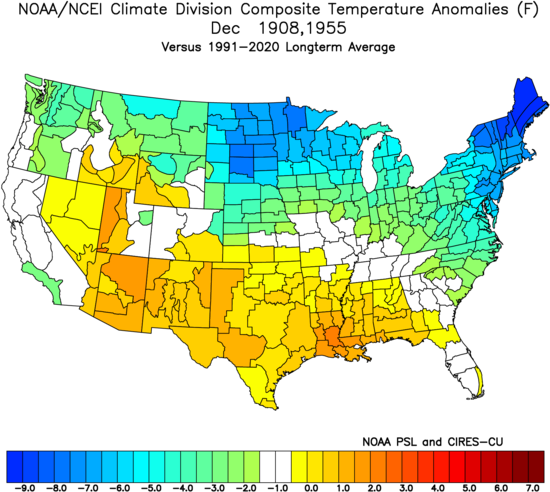 1955 is one of the May analogs to high-impact seasons for hurricanes which we are having. And the cold December we outlined from a couple of months ago. 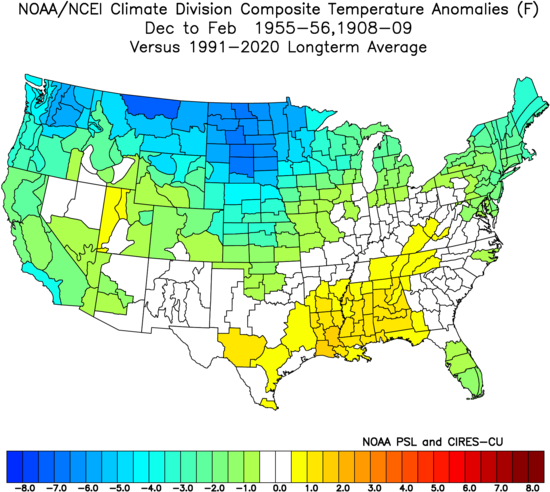 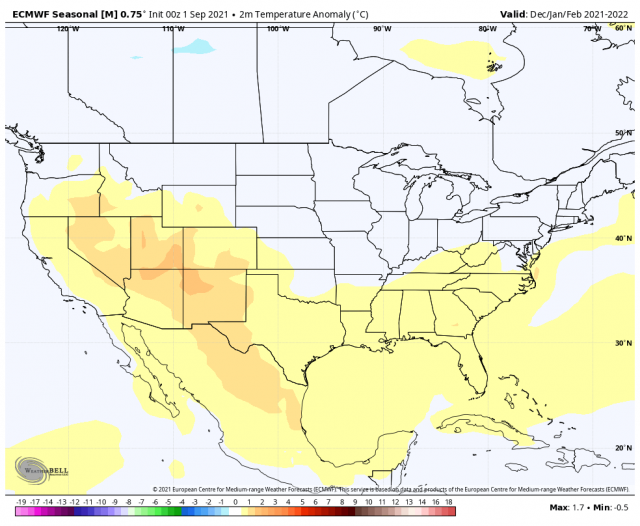 Now that is how I am supposed to work., Rather than getting all bent out of shape when someone emails things like what I saw, find the counter ( they are always there, seriously it is like shooting fish in a barrel.. I don’t know if it’s because they don’t look or don’t know). In this case, if you don’t know Connie and Diane what are you doing even bringing this up, But then I say, hmm, interesting Connie and Diane 1955. It is one of the high-impact years. Let us look at the December fast start idea tied in.. it is there. But so is the lack of typhoons, Interesting, And then cause I have no life and I read old hurricane summaries from years gone by, I remember the mention of the SLP pattern in the Atlantic looking like 1908. So look at 1908

And while you are seeing this now, clients and subscribers see all this stuff first, I just realized I have to get it out there since no one in the media seems to care anymore and lets alarmist run rampant.

And none of this is possible without someone ( a friend) trying to get my blood pressure up telling me about a CNN interview with Dr Mann. So hat tip Dr Mann, you inspired something to link and write about.

Seriously I should do the Dick Morris, Bill Clinton thing.. Bill Clinton was smart enough to get a republican to advise him, I can actually advise people on the other side of what they can and can not use. Of course, that would take a media that was accountable that would call them on some of the traps they walk into. But believe me, I know where the warming bodies ( they are out there, signs there are changes) are buried. But unfortunately, attribution is a problem for them, and also the fact it leads TO BETTER WEATHER in some places (for example no Pacific typhoons)

But now I gotta start digging into 55-56

What was that SLP pattern btw ?

Lower than ave pressures in the eastern Atlantic 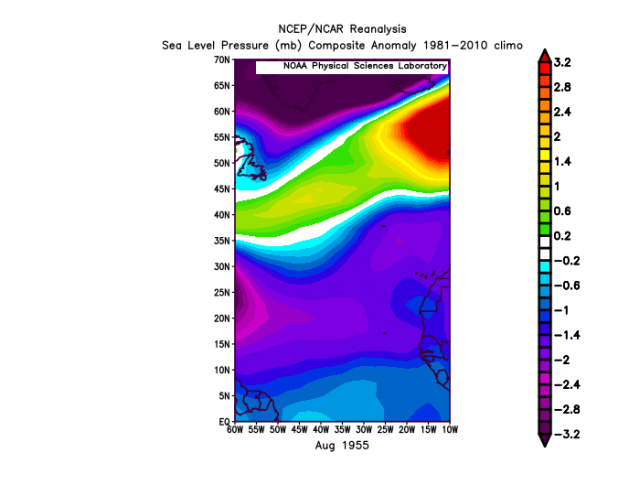 Look at this year.. Lower than average pressures over the eastern Atlantic 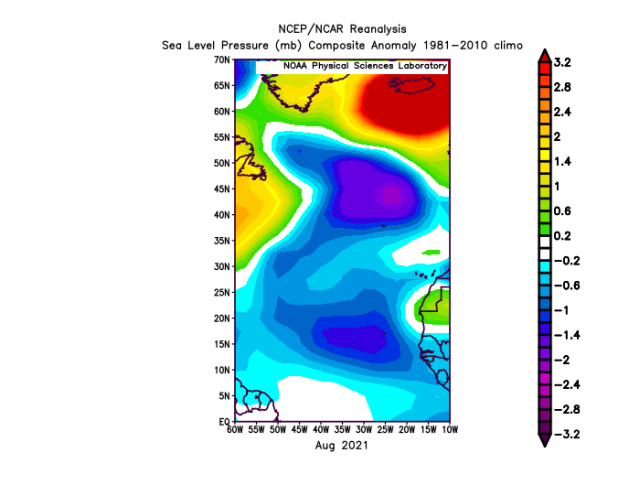 and just think if not for  CNN, Dr. Mann and PSU none of this would have amused you.