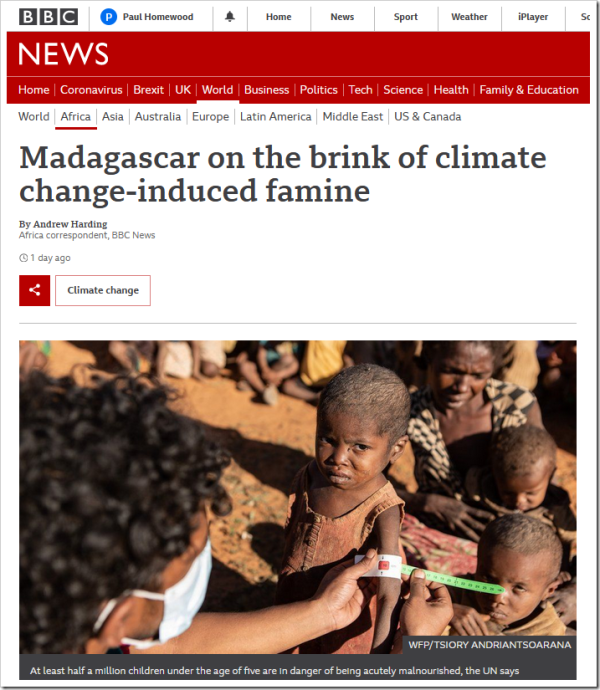 Madagascar is on the brink of experiencing the world’s first “climate change famine”, according to the United Nations, which says tens of thousands of people are already suffering “catastrophic” levels of hunger and food insecurity after four years without rain.

The drought – the worst in four decades – has devastated isolated farming communities in the south of the country, leaving families to scavenge for insects to survive.

“These are famine-like conditions and they’re being driven by climate not conflict,” said the UN World Food Programme’s Shelley Thakral.

The UN estimates that 30,000 people are currently experiencing the highest internationally recognised level of food insecurity – level five – and there are concerns the number affected could rise sharply as Madagascar enters the traditional “lean season” before harvest.

“This is unprecedented. These people have done nothing to contribute to climate change. They don’t burn fossil fuels… and yet they are bearing the brunt of climate change,” said Ms Thakral.

The reality is that agricultural output in Madagascar rocketed between 2002 and 2012, although it has been steady since. However this has not kept up with population growth, which has doubled since 1990.

According to the Borgen project, the real problem is the lack of land available for farming, which is critical when population has doubled in the last thirty years. They also point out that Madagascar has always been highly exposed to natural disasters, but because of overfarming, the soil erodes and loses fertility:

None of this the slightest thing to do with climate change, as the fake news BBC would like you to believe.