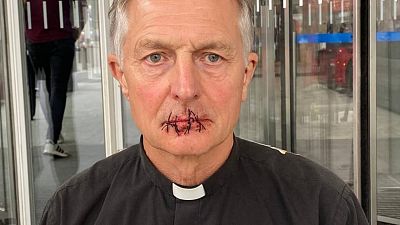 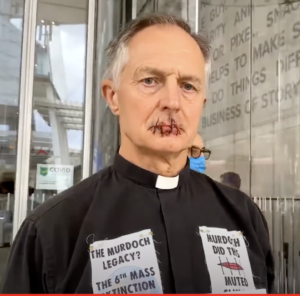 Climate protests in Britain have taken a sickening turn, with a member of Christian Climate Action and Extinction Rebellion mutilating himself in public to draw attention to his views on Rupert Murdoch and the alleged climate crisis.

A priest has sewn his lips together to protest against the “suppression” of climate science in Rupert Murdoch’s media outlets.

In a video released on YouTube, Hewes calls Murdoch a “climate change denier, dissembler and delayer” and says the media mogul has influence over governments which has led to a lack of meaningful action on the climate crisis.

Alongside Hewes, a Church of England priest in the Diocese of Oxford and a former dentist, was Reverend Mark Coleman, 62. Coleman took a letter into the building addressed to the Environment Editor at The Times newspaper, asking him to meet and discuss the situation.

Who is behind the protest?

The Reverend is part of Christian Climate Action, a branch of the climate movement Extinction Rebellion.

What can I say – I think most of us wish the Anglican Church would focus on more immediate problems.

The following is the youtube video of the protest, do not watch the video or click the read more link above unless you have a strong stomach. You will see graphic photos and videos of Reverend Tim Hewes’ act of self mutilation.

I was in two minds whether to cover this story. There is a legitimate concern that publicity is what the perpetrator of this gross act of self mutilation wants, and I’m helping to supply that publicity. More misguided attention seekers might follow his example.

But I think it is important to hilight the true state of mind of the most extreme climate activists in Britain. What will their next move will be, when self mutilation fails to deliver the outcome they want? I do not want to be anywhere near the action when we all learn the answer to that question.