Which is it? ‘Climate change’ causes horses to both grow fat & shrink! The case for “climate change” causing horses to grow fat: 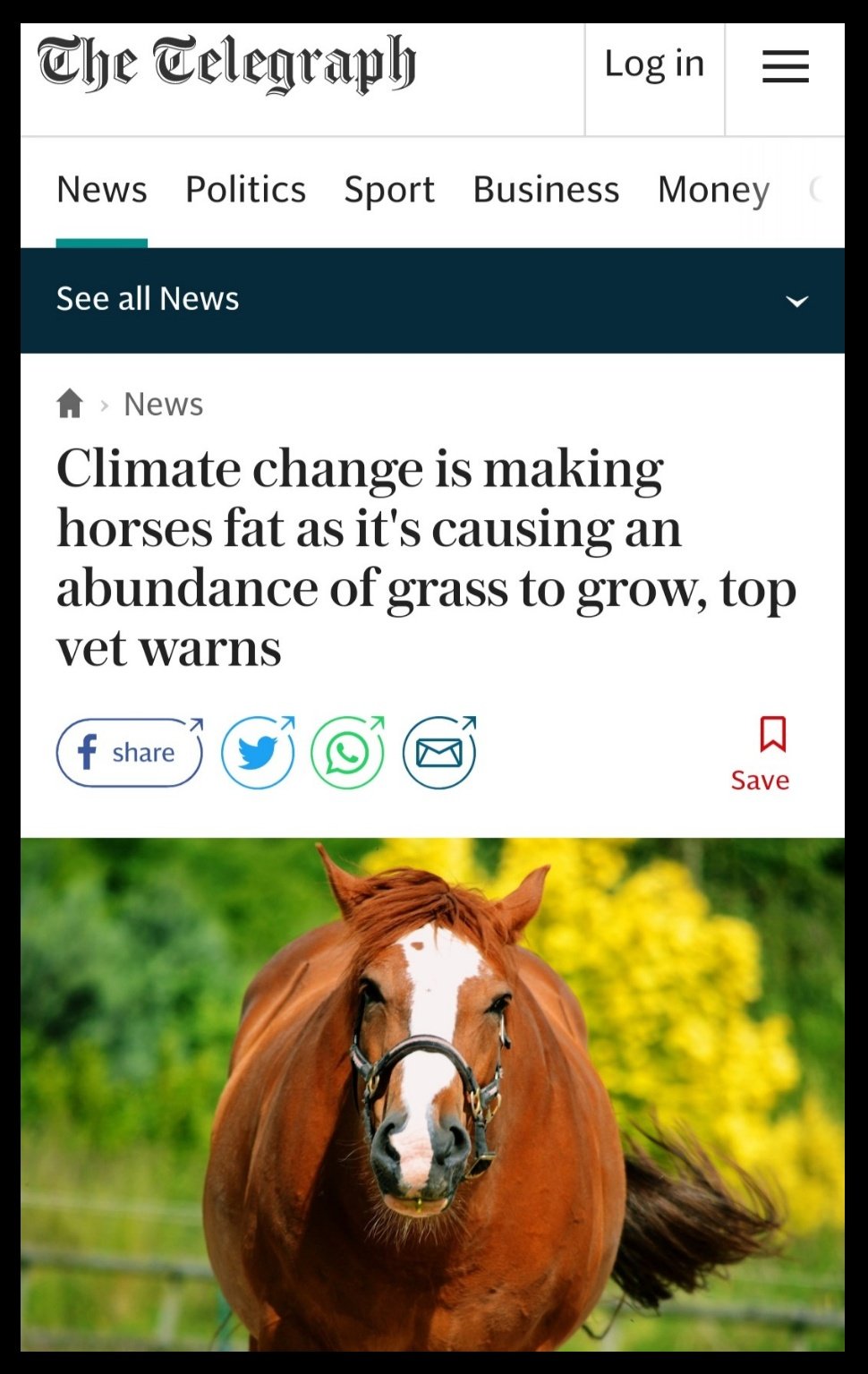 Gillies Moffat, director of a veterinary centre in Hythe, Hampshire, said the wetter and warmer climate has meant the animal’s staple food has grown more rapidly than in the past.

Horses should be moved into bare paddocks, vets have said, because an abundance of grass caused by climate change is making them fat.

The vet warned a “significant” percentage of horses he treats are overweight because of a range of modern “socioeconomic pressures” including climate change.

It comes after the British Equine Veterinary Association (BEVA) found in a study of 792 horses last year that 31 per cent were overweight, with vets citing a lack of facilities such as stables and bare paddocks (48 per cent) as reasons.

Their report’s top recommendation to reducing their animal’s weight was keeping horses in bare paddocks and giving them a weighted food diet.

Mr Moffat believes as a result of the pressures horse owners are struggling to control their animals’ weight, leading to a number of painful physical conditions.

He said: “A significant percentage of the horses we see are overweight. It is partly a reflection on socioeconomic pressures.

“Owners are working longer hours so find regularly exercising their horses hard to do.

“Also, the term ‘good show condition’ has historically and subconsciously implied a more ’rounded’ horse rather than a fit well muscled horse. WASHINGTON (AP) — Global warming shrank certain animals in the ancient past, and scientists think it could happen again.

Warm-blooded animals got smaller at least twice in Earth’s history when carbon dioxide levels soared and temperatures spiked as part of a natural warming, a new study says.

University of New Hampshire researcher Abigail D’Ambrosia warned that mammals — but not people — could shrivel in the future under even faster man-made warming.

“It’s something we need to keep an eye out for,” said D’Ambrosia, who led the new work. “The question is how fast are we going to see these changes.”

Three different species shrank noticeably about 54 million years ago when the planet suddenly heated up. One of them — an early, compact horse — got 14 percent smaller, going from about 17 pounds to 14.6 pounds, according to an analysis of fossil teeth in Wednesday’s journal Science Advances .

“These guys were probably about the size of maybe a dog, then they dwarfed,” said D’Ambrosia. “They may have gone down to the size of a cat.” Study: Horses, Other Mammals Are Shrinking as Climate Heats Up – March 16, 2017 – Natural News

It’s heating up all over the world and global warming comes with far-reaching consequences on life. One of the effects of rising climate is making certain animals considerably smaller — and scientists are keeping an eye out for evidence of it happening in the coming future. … It was 54 million years ago when the temperature dramatically rose and shrunk three known species including an early horse and a lemur-like animal that’s the earliest known primate.

Some of the factors that led to the shrinking of the animals may have been nutrient availability, which may have been caused by rising temperatures and drought. She added, “Drought conditions have been known to lead to smaller offspring.” The researchers published their findings in the journal Science Advances.

Researchers have learned that, over the millennia, many mammals—horses included—adapted to climate by getting smaller.

As far back as 50 million years ago, horses figured out that bigger isn’t always better. Researchers have learned that many mammals—horses included—adapted to climate change by getting smaller.

By requiring less nutrition and water to survive and by having more surface area compared to their general size to better “air themselves out,” smaller horses and other mammals can adapt to hotter climates, said Abigail (D’Ambrosia) Carroll, a PhD candidate in the Earth and Environmental Sciences Department at the University of New Hampshire, in Durham.

During recent periods of global warming (56 and 53 million years ago) horses either migrated or evolved to exist as smaller species, Carroll said. In fact, the greater the temperature increase, the smaller the horses got. They might have adapted over many generations to become smaller than their predecessors. Or, already existing smaller horses might have migrated into areas once inhabited by larger horses.

“Maybe smaller-bodied horses of the same species simply migrated northward as Earth temperatures rose, in some attempt to stay cooler in the higher latitudes,” she said.

So should we expect our own horses to get smaller as we enter this new phase of global warming? Probably not, Carroll said. At least, not domestic horses.

“I think it would take serious dramatic temperature change and changes to the food supply for us to see any difference in domestic horses,” she said. “We humans are pretty good at controlling the environments we live in,and the environments of the animals and livestock we depend on and care about.”

That might not be the case with wild and feral horses, however. “It wouldn’t shock me if free-roaming and wild populations began to show signs of body size decrease,” Carroll said. “Scientists around the world have already been documenting climate-induced body size change in some wild mammal populations, from the red deer in Europe to the California squirrel.”

The horses in Carroll’s study were already significantly smaller than today’s horses, however. “Arenahippus was about the size of a dog when temperatures were ‘normal,’ and when they dwarfed during those extreme warming events, they reached the size of a cat,” she said. “And grasses actually didn’t exist yet when these little guys were running around (and didn’t evolve for another 15-20 million years), so instead they were eating twigs, berries, nuts, and foliage from within the forests that they dwelled.”