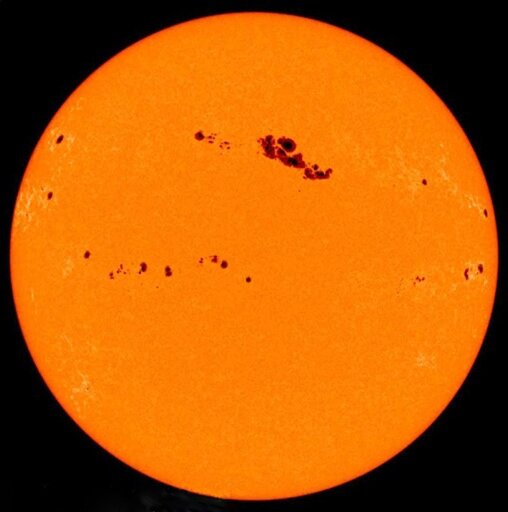 Unknown to most people except those with an interest in solar science, the sun is about to shut down. Well, not completely – we’ll still have plenty of sunlight and heat, but the small dark blotches on the sun’s surface called sunspots, visible in the figure below, are on the verge of disappearing. According to some climate scientists, this heralds a prolonged cold stretch of maybe 35 years starting in 2020, despite global warming.

How could that happen? Because sunspots, which are caused by magnetic turbulence in the sun’s interior, signal subtle changes in solar output or activity – changes that can have a significant effect on the earth’s climate. Together with the sun’s heat and light, the monthly or yearly number of sunspots goes up and down during the approximately 11-year solar cycle. For several decades now, the maximum number of sunspots seen in a cycle has been declining.

The last time sunspots disappeared altogether was during the so-called Maunder Minimum, a 70-year cool period in the 17th and 18th centuries forming part of the Little Ice Age, and illustrated in the next figure showing the sunspot number over time. The Maunder Minimum from approximately 1645 to 1710 was the most recent occurrence of what are known as grand solar minima, or periods of very low solar activity, that recur every 350 to 400 years. So we’re due for another minimum.

Northumbria University’s Valentina Zharkova, a researcher who’s published several papers on sunspots and grand solar minima, has linked the minima to a drastic falloff in the sun’s internal magnetic field. The roughly 70% downswing in magnetic field from its average value is part of a 350- to 400-year cycle arising from regular variations in behavior of the very hot plasma powering our sun.

Her calculations predict that the upcoming grand solar minimum will last from 2020 to 2053, with global temperatures dropping by up to 1.0 degrees Celsius (1.8 degrees Fahrenheit) in the late 2030s. That’s as much as the world has warmed since preindustrial times, and only 0.4 degrees Celsius (0.7 degrees Fahrenheit) above the frigid temperatures recorded in 1710 at the end of the Maunder Minimum.

The Maunder Minimum was unquestionably chilly: alpine glaciers in Europe encroached on farmland; the Netherlands’ canals froze every winter; and frost fairs on the UK’s frozen Thames River became a common sight. Solar scientists have calculated that the sun’s heat and light output, a quantity known as the total solar irradiance, decreased by 0.22% during the Maunder minimum, which is about four times its normal rise or fall over an 11-year cycle.

Other solar researchers have also predicted an imminent grand solar minimum, but for different reasons. One of the earliest predictions was by German astronomer and scholar, Theodor Landscheidt, in 2003. Landscheidt predicted a protracted cold period centered on the year 2030, based on his observations of an 87-year solar cycle known as a Gleissberg cycle, which has been linked to regional climate fluctuations such as flooding of the Nile River in Africa.

A more recent prediction, based on a longer 210-year solar cycle, is that of Russian astrophysicist Habibullo Abdussamatov. He projects a more extended period of global cooling than either Zharkova or Landscheidt, lasting as long as 65 years, with the coldest interval around 2043.

Not all solar scientists agree with such predictions. Although NOAA (the U.S. National Oceanic and Atmospheric Administration) has recognized that sunspot numbers are falling and may approach zero in the 2030s, the international Solar Cycle 25 Prediction Panel forecasts that the sunspot number will remain the same in the coming 11-year cycle (Cycle 25) as it was in the cycle just completed (Cycle 24). Declaring that the recent decline in sunspot number is at an end, panel co-chair and solar physicist Lisa Upton says: “There is no indication we are approaching a Maunder-type minimum in solar activity.”

But if the predictions of Zharkova and others are correct, tough times are ahead. A relatively sudden drop in temperature of 1.0 degrees Celsius (1.8 degrees Fahrenheit) would have drastic effects on agriculture, causing crop failures and widespread hunger – as occurred during the Maunder Minimum. And the need for extra heating in both hemispheres would come at a time when it’s likely that much of our heating capacity, supplied largely by fossil fuels, will have been eliminated in the name of combating climate change.