Large Increase In Number Of Sunshine Hours Likely Behind Warming, Glacier Retreat In Alps Since 1980

Large Increase In Number Of Sunshine Hours Likely Behind Warming, Glacier Retreat In Alps Since 1980
NoTricksZone: Not here to worship what i… / by P Gosselin / 1d

Today we look at some climate charts of the European upper Ostalpen to look for hints what may be behind the warming since the late 20th century. We know glaciers there have been receding over the recent decades.

First is a mean temperature chart of the region for the May to September period going back 133 years: 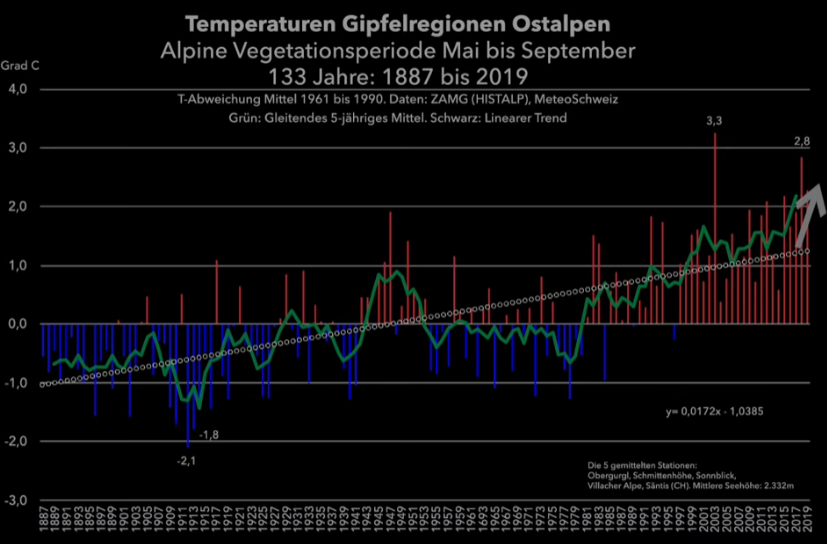 Plotted are data from the Austrian ZAMG and the Swiss MeteoSchwiez, 5-year smoothed (green) and the linear trend (black). Clearly there’s been a long-term warming., but the vast share of the warming occurred since the late 1970s, after a 30-year period of cooling (since the early 1940s).

What could have happened since the early 1980s?

Of course CO2 emissions rose since 1980, and summer temperatures high in the Ostalpen rose. But is there something else?

One thing that could cause summertime temperatures to rise and glaciers to melt is sunshine. So Aigner plotted the number of sunshine hours for the May-September period for each year and produced the following chart:

As the above chart shows, the sun has shined considerably more over the recent decades than it used to in the 1970s, or late 19th century. Today the region sees about a whopping 200 hours more sunshine than 120 years ago! More sunshine would mean more warmth.

Aigner in the video then superimposed to two plots going back 50 years. Here’s how they compare:

The region receives over 100 hours of sunshine more today on average than it did 40 years ago. It shouldn’t be a surprise that the Alps have warmed and glaciers receded.

The real question is why is the region less cloudy today?