I have some progressive friends who refuse to believe that agenda-driven zealots pushing the Green New Deal will be able to enact it because we are so much in debt, we can’t afford it.

When has that ever stopped zealots before? In fact why, given the attacks of our nation’s foundational values of life, liberty, and the pursuit of happiness, is that not their goal?

I try to look at everything people who think differently from me look at because of 3 reasons:  1) there may be some common ground  2) I want to know what they know. 3)  refers to 2, in studying what they are saying if they are right, I wish to adopt it, for it makes me better. If not I am still better because I did the work to strengthen my ideas.

So other ideas are immensely valuable to me, but in the realm of climate and weather,  that is being shut down, which circles back to the real agenda talked about above.

So I listen to proposals from people that are different from me.  The proposals out there, about 0 carbon emissions, while perhaps capturing the imagination of people that fear what they have indoctrinated with, is like thinking we will have the technology to pull the Old “Beam me Up Scotty” from Star Trek by 2035.  We did not even have “shovel ready jobs”  when that was proposed, what makes anyone think that we will be able to supply the energy lifeline for freedom with this.  And the contradictions continue  The proponents of this are embracing a Buy American first stimulus plan for manufacturing, the very things that have been outsourced and we were told would never come back again by those same people. I certainly agree with buy American,  but why would anyone want to put in charge the very people that said those jobs were gone? And where is the energy going to come from to power these factories?

I am an old “greenie”   I want to take this issue off the table. It no longer matters what guys like me think about the causes,  for this is not a science issue anymore, its a matter of really finding out who is serious about this without motives that limit American exceptionalism  We can do it   The republicans have a trillion tree proposal in congress ( there are 2 democrats on board, why not more?).  Just watching the co2 curve shows you what happens when leaves come back on trees in the northern hemisphere. SO USE NATURE TO CORRECT THE FEARED IMBALANCE NO MATTER WHAT THE CAUSE!  2) embrace nuclear power, Even former Nasa scientist James Hansen ( ” the godfather” of global warming) has advocated for that. 3  Carbon Capture.  . Of course Natural Gas is a co2 friendly source, but rest assured, that industry is going to get hit.

I cannot understand why anyone who is truly concerned with this,  would not embrace these ideas rather than the same ideas that failed miserably in countries like Spain and Germany.

But let me show you what there is to deal with in hot summers if there is not the energy to cool our homes or businesses. Its summer, everyone is talking about how hot the summer is. Well look at this

The summer so far has temperatures 2-3 above average, which is warm but not that big a deal yet, in a swath of the nation, Countering cool is in the northwest. But more people are warmer than average than cooler And in the sulltry southeast, a normal to below normal summer is occurring.

As a side note, My company has been bullish on a very warm mid-summer into fall since March, as this kind of pattern also favors the Atlantic basin having the most tropical cyclone activity relative to averages. So this was anticipated  though US models from June woefully underestimated this 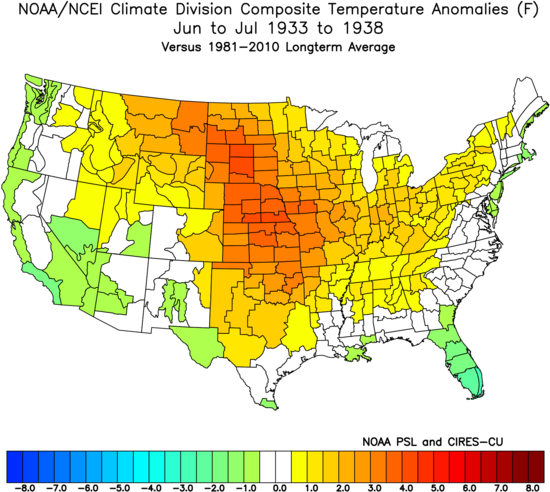 that is not just one year, but 6 (and keep mind, that period was a track race for US hurricane hits)

Now look at the high temperatures 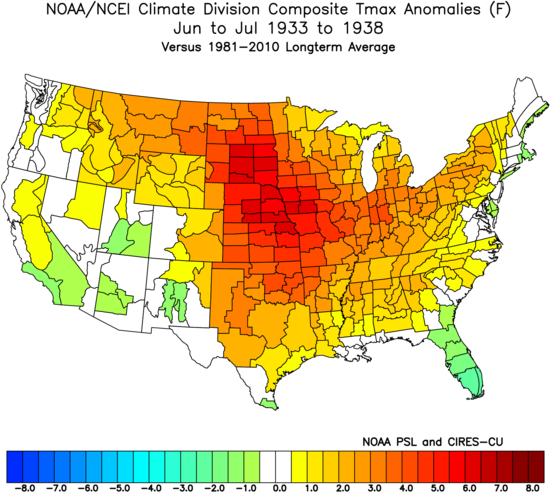 unlike what is going on today, where nighttime lows are higher, it was the core of the day that was scorching

Nighttime lows were not as warm 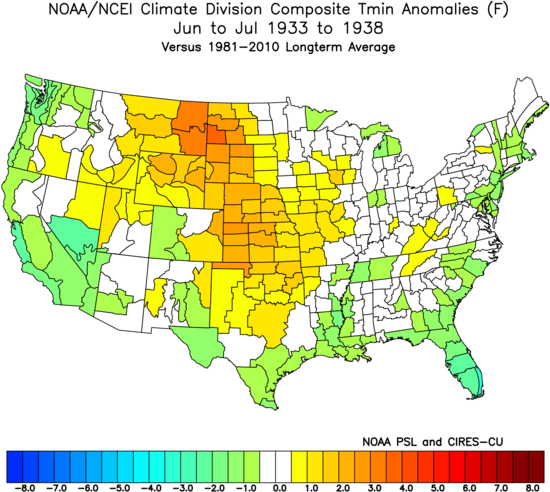 because it is so dry, which promotes a greater range of temperatures. Here is the drought index ( wonder why there was a dustbowl?) 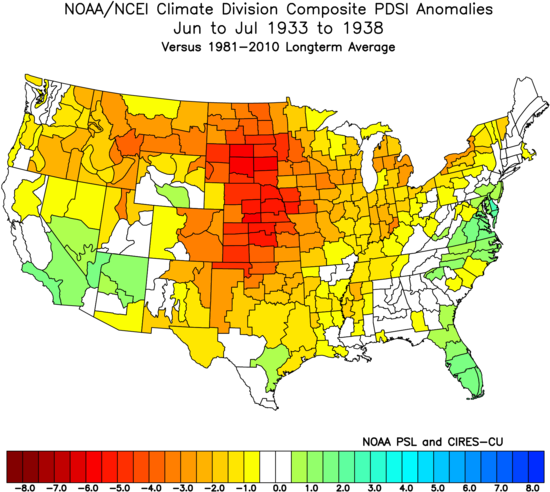 so if this happened before, why can’t it happen again, but imagine if it did and you did not have what we have today to mitigate this? 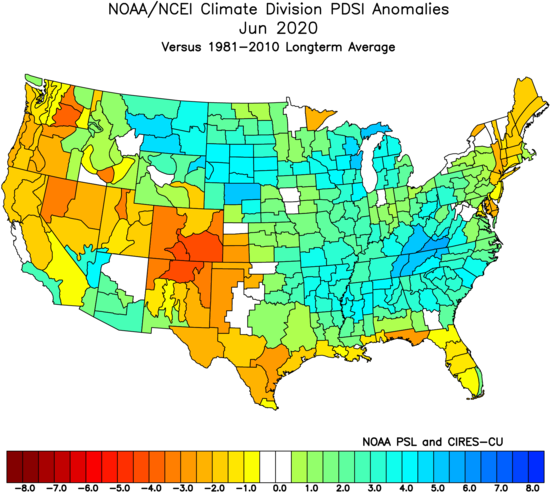 it is wet in many places where we grow food.

But the whole point of this exercise is to show that if there is not the energy needed to cool our homes ( or warm them in winter) then misery will ensue. And it will be manmade, by agendas enacted that would limit your ability to counter what nature is in control of. I am not against developing any source of energy and encourage it,  but shutting down what is known based on a still unknown is not the way to do such a thing. And while I may not believe man is messing up the climate, my ego has to put aside to face the very real idea that we have an increasing bloc of voters that do fear this. So if there is a way to address the fear that is BENEFICIAL  to our nation, supplies those that fear it with a hope for a future, and far less costly than something that requires the belief that somehow you can change what has naturally occurred for the entire life of the planet, then any rational person, no matter whether they fear it or not, should be looking for ways to take this issue off the table.

We are going to find out real quick if such ideas as what I have listed come out, who is really serious about this issue, and who is using it for another agenda. In the meantime, Man-made misery lurks, for a different reason than the one so many have been indoctrinated.