New Study: Sea Level Rise Along The North American Coast ‘Not Necessarily Symptomatic Of Anthropogenic Forcing’
NoTricksZone: Not here to worship what i… / by Kenneth Richard / 1d

Scientists suggest relative sea level changes are well-correlated with natural variability and accelerated sea level rise is a “recurring feature” of what has been observed for over 300 years. Five of six studied regions along the North American Atlantic coast show declining sea level rates (mm/yr) in recent decades.

After retreating into the sea until about 1960, for the last five decades the Atlantic coast of North America has, on net, reversed course, expanding at a rate of about 5 centimeters per year (Armstrong and Lazarus, 2019).

This is likely the exact opposite of what would be expected given the reports of accelerated sea level rise for this region in recent decades. 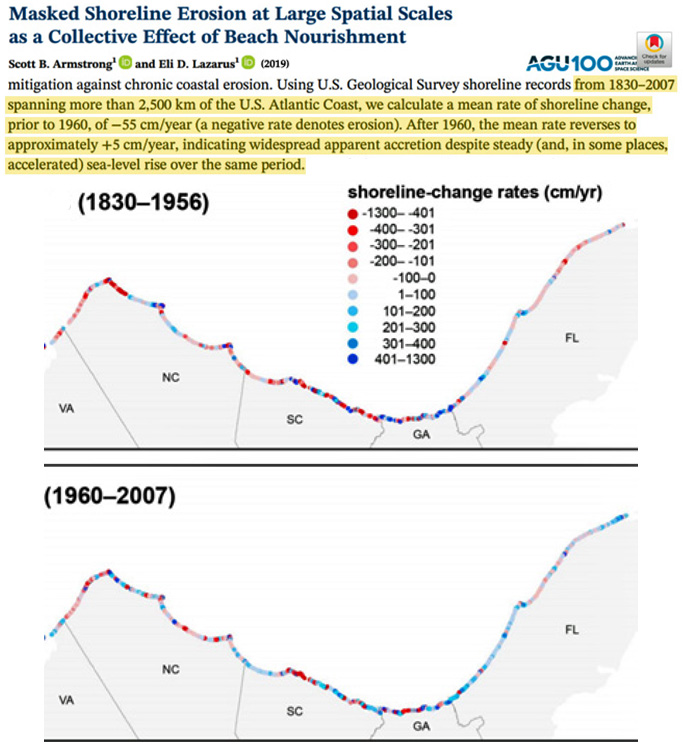 The lead author of a new study, Professor Roland Gehrels, has previously found much more rapid rates of sea level rise prior to 1950 than in recent decades in Southern Hemisphere locations, such as along the coasts of Tasmania and New Zealand (Gehrels et al., 2012).

Interestingly, of the 6 locations chosen for the study, only 1 (Connecticut) indicates sea level rise rates have been steadily accelerating throughout the second half of the 20th century and in recent decades. The 5 others (Nova Scotia, Maine, New Jersey, North Carolina, and Viðarhólmi) all show the millimeters-per-year rates of sea level change have either not been rising or even rapidly falling.

This would not appear to be consistent with a driving anthropogenic influence in sea level rise trends since the 1950s, or since CO2 emissions have risen dramatically.