Greenie Elon Musk is rallying voters to vote for Trump

"Musk's got 34 million followers.  He's the emblem of the Obama new greenie economy — and now he's going over to the Trumpside.  What do they have left after they lose him as their bright shiny bauble?

As for Musk, he's sick of Democratic actions as they happen on the ground, doing everything they can to put him out of business, and then screaming 'f--- you' when he threatens to walk away."

Greenie car manufacturer Elon Musk, who has 34 million Twitter followers, has effectively told them all to go vote for President Trump, using a popular vernacular expression:

127K people are talking about this

Fox News calls that a “cryptic” tweet, but I suspect that’s some leftist headline-writer’s doing, because the story itself indicates that the writer knows perfectly well what is going on:

“Take the red pill” is a line from the popular 1999 movie “The Matrix” about seeking the unvarnished truth: “You take the blue pill, the story ends, you wake up in your bed and believe whatever you want to believe. You take the red pill, you stay in Wonderland and I show you how deep the rabbit-hole goes.”

More recently, it’s been slang for people abandoning the ways of liberalism for the values of conservatism. People of all ages and ethnicities posted online videos describing “red pill moments” — personal awakenings that have caused them to reject leftist narratives imbibed since childhood from friends, teachers, and the news and entertainment media.

Leftists of all stripes bellowed their displeasure about this tweet, none more loudly than the movie industry people who created the original story.  After all, it’s their movie script line has become a rallying cry to “join the conservatives” even though that wasn’t their intention — and the analogy described by Fox is particularly interesting, given that Democratic standard-bearer Joe Biden wants everything to go back to the pre-Trump era (except more leftish), which is perfectly analogous with the blue pill, while Musk himself is famous for enjoying deep dives into the unknown, same as the red pill.  The Tesla founder definitely thought that tweet through before he posted it.

Andrea Widburg explores this brilliantly in a post today here.

And as the left yelled, Musk posted yet another one for them, doubling down on his original tweet, effectively saying he’s through with playing both sides of the political fence as a lot of businessmen, including himself, have done, red pill or bust.  Get a load:

When u take DayQuil & NyQuil at same time 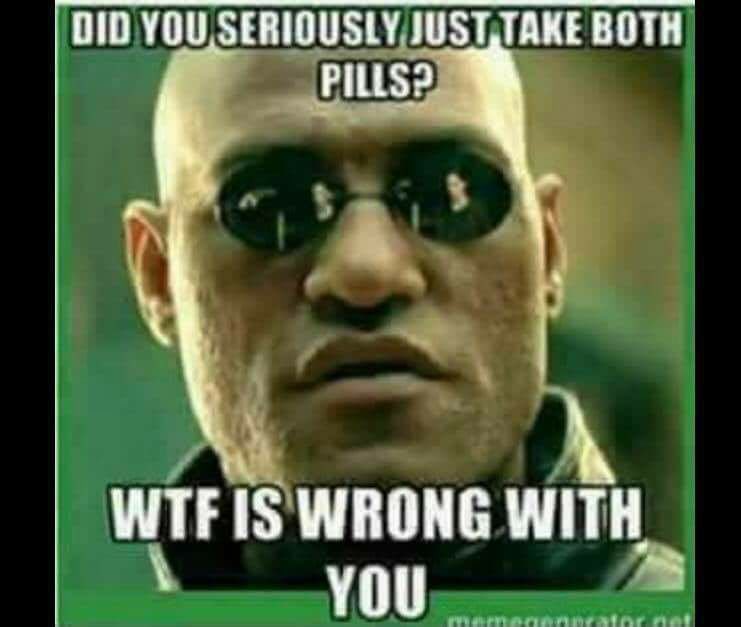 13.4K people are talking about this

He’s done with the Democrats, through, this is the end, he’s not looking back.

This is an appropriate response, given that mighty “f— you!” he got from state Assembly member Lorena Gonzalez, expressing her glee at Musk’s threat to pull up stakes from blue California and take his Tesla operations to Texas.  While state and county officials rushed in to assuage him like a bunch of court flatterers after he defied their shutdown orders and ramped up his manufacturing operations in Fremont, California, Musk obviously hasn’t been assuaged.

His red pill endorsement was positively toxic for Democrats’ election prospects, which is why so much rage and appeasement has been going on around him.

He’s got 34 million followers.  He’s the emblem of the Obama new greenie economy — and now he’s going over to the Trumpside.  What do they have left after they lose him as their bright shiny bauble?

As for Musk, he’s sick of Democratic actions as they happen on the ground, doing everything they can to put him out of business, and then screaming ‘f— you’ when he threatens to walk away.

Who wouldn’t see the clarity of the whole thing after that one?  Of course he took the red pill; the red pill is what it means to see clearly.  The hoggish Gonzalez might just have been the creature who handed it to him.  Now he’s driving off, taking not just car manufacturing to red-state Texas, but millions of people to red President Trump, too.