For the second time this month, sea ice around Svalbard Norway was the 6th or 7th highest since records began in the late 1960s. Pack ice at the end of April still surrounds Bear Island (Bjørnøya) at the southern end of the archipelago, which is a rare occurrence at this date. These conditions document a recurrent pattern of high ice extent and especially extreme ice thickness in the Barents Sea since last summer.

Graphs provided by the Norwegian Ice Service only goes back to 1981 (see the ‘Min/Max’ dotted line in the graph above) but their records go back to at least 1969. Extent at April 29th was sixth highest and on the 30th seventh highest – only slightly less than 1998. NIS archived ice charts availble onlineonly go back to 1998 for April. Below are the charts for April 29th and 30th: 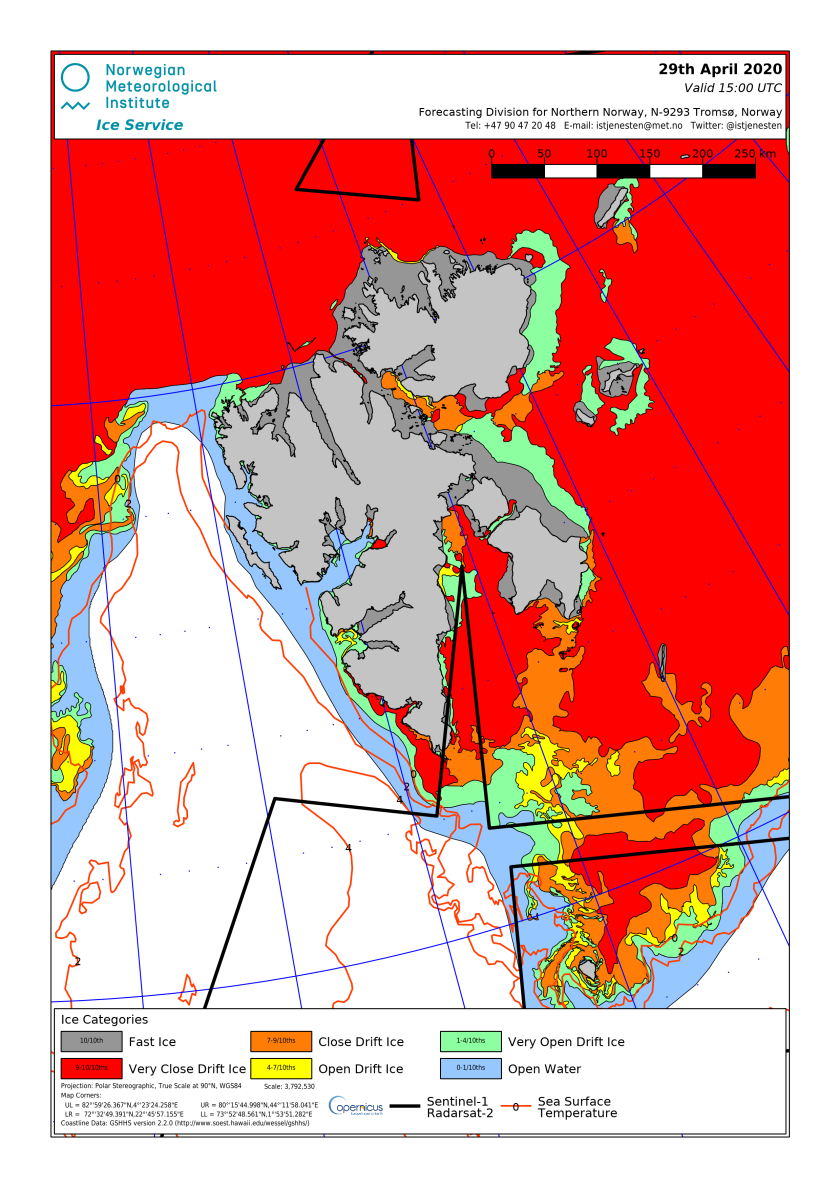 Thick sea ice in the Barents Sea north of Svalbard has been remarkable this year, as the chart below from Danish Arctic researchshows: 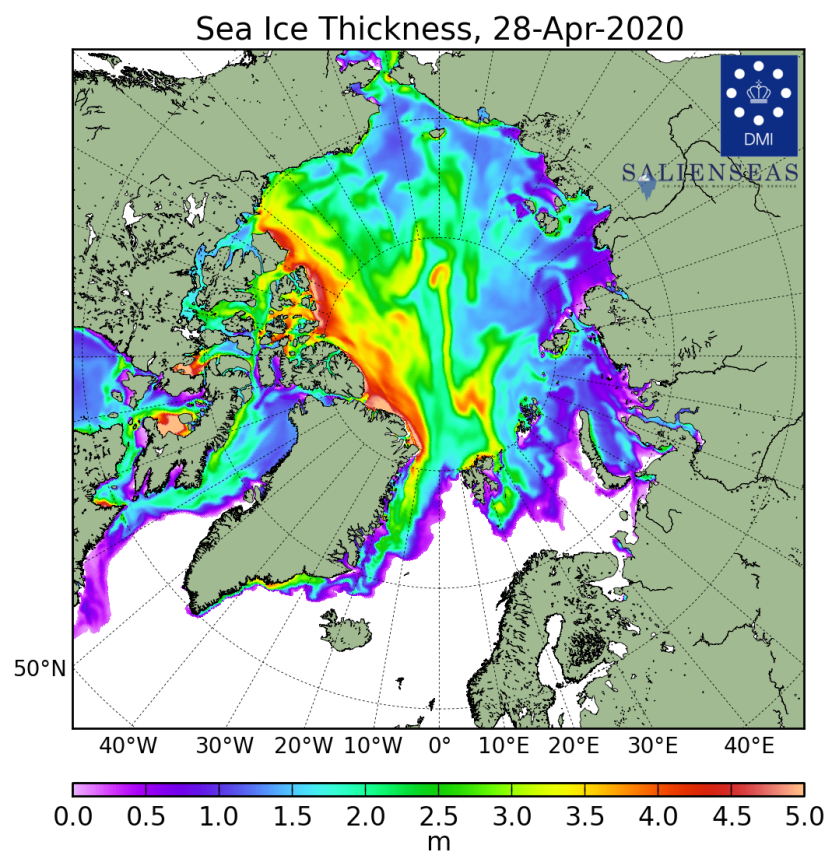 The icebreaker Polarstern, intentionally trapped in the ice pack, may well have trouble making its rendezvous with two German icebreakers off Svalbard in mid-May to exchange staff and replenish supplies. The world’s most powerful nuclear-powered icebreakers can plow through ice up to 2.5m thick but most of the ice just north of Svalbard (see map above) is 3.0-3.5m thick. The map below shows the Polarstern‘s position at 27 April 2020:

A commenter on Twitter posted a link to a blog post (in Russian) that contains remarkable photos of Russian icebreakers working through consolidated sea ice north of Novaya Zemlya in the Barents Sea in early April. Google Translate offered this nugget: “On the northern shores of Novaya Zemlya there are glaciers that throw off such gifts to sailors in the sea.” These ‘gifts’ are icebergs breaking of the huge icefields of NW Novaya Zemlya (see his/her photo below):

Similar conditions are what stopped explorer William Barents and his crew in their tracks back in 1596 in late August and forced them to spend the winter and following spring in the Arctic. See map below of the ice cap (white) on northwest Novaya Zemlya from this paper: icebergs form ‘ice fields’ off the west coast, generated by the many glaciers; these icebergs get consolidated into the pack ice north and northwest of the island. Cape Spory Navolok is where Barents’ ship was trapped – they made it through the ice fields on the west and north coasts only to get caught in the thick ice off the northeast coast: 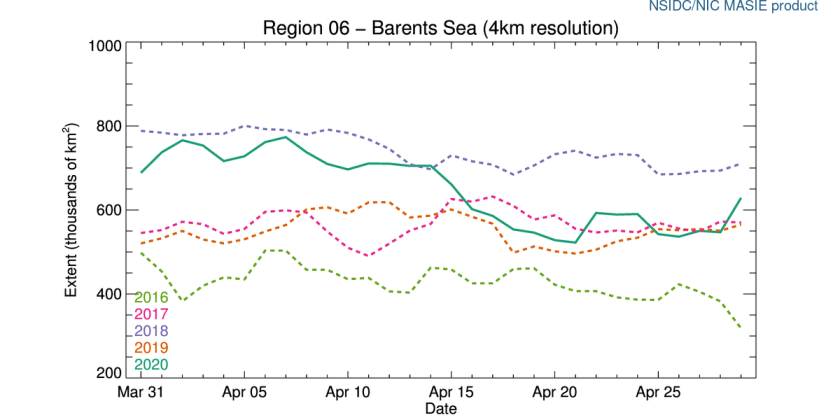 Barents Sea ice supports the Barents Sea polar bear subpopulation and has seen the largest decline in summer sea ice since 1979 of all 19 subpopulations – a much larger decline than even Western and Southern Hudson Bay (Regehr et al. 2016, see below). 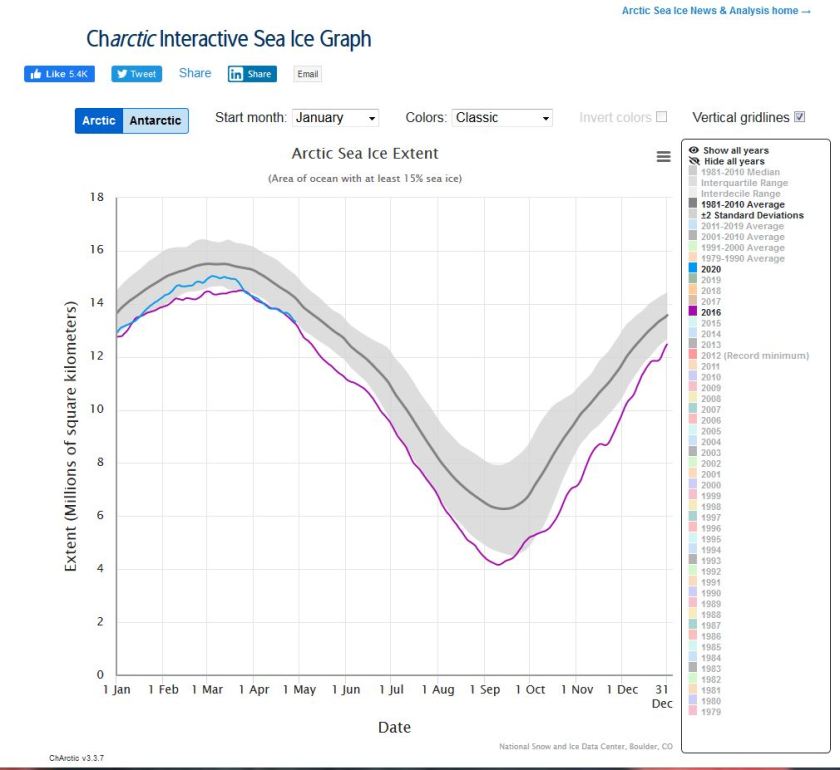