Activist Josh Fox, climate scientist Michael Mann and other environmentalists signed onto a petition Friday asking the producer to take down “Planet of the Humans,” saying Moore’s film relies on old data to claim solar and wind energy is dependent on fossil fuels. Films for Action, which claimed credit for the film, said in a statement Saturday that it nixed the film before putting it back online, saying the move was meant to engage in debate.

“We are disheartened and dismayed to report that the film is full of misinformation — so much so that for half a day we removed the film from the site,” Films for Action noted in a press statement Saturday. “Ultimately, we decided to put it back up because we believe media literacy, critique and debate is the best solution to misinformation.”

“Planet of the Humans,” for its part, posted a media alert after publication warning viewers that the movie is distributed through Rumble Media, noting also that the film’s producers are not affiliated with Films for Action.

Films for Action nevertheless shared some of its thoughts on the film’s premise, which was directed by environmentalist Jeff Gibbs and argued human beings are the problem, not energy production. (RELATED: Michael Moore Rolls Out A Doc Ahead Of Earth Day Destroying A Common Enviro Left Narrative)

“We still need to transition to 100% renewable energy. There is no other option. But the delusion that we need to dispel is the idea that renewables can power our industrial civilization as is, and that these technologies are entirely ‘green’ when they are themselves still destructive,” Films for Action noted in the statement.

Gibbs and Moore lashed into wind, solar and biomass in particular.

“Green energy is not going to save us,” Gibbs noted in the film before focusing his ire on environmentalists Bill McKibben, Van Jones, Robert F. Kennedy and former New York City Mayor Michael Bloomberg, all of whom push for a combination of solar panels, nuclear or wind power to replace oil production.

Fox, who’s perhaps best known for producing the anti-fracking film “Gasland,” told his Twitter followers Friday that the attempt to take down the film was successful. He included in the tweet a screenshot of Films for Action’s statement, which did not include the section of the post explaining why the producer opted not to take down the film. 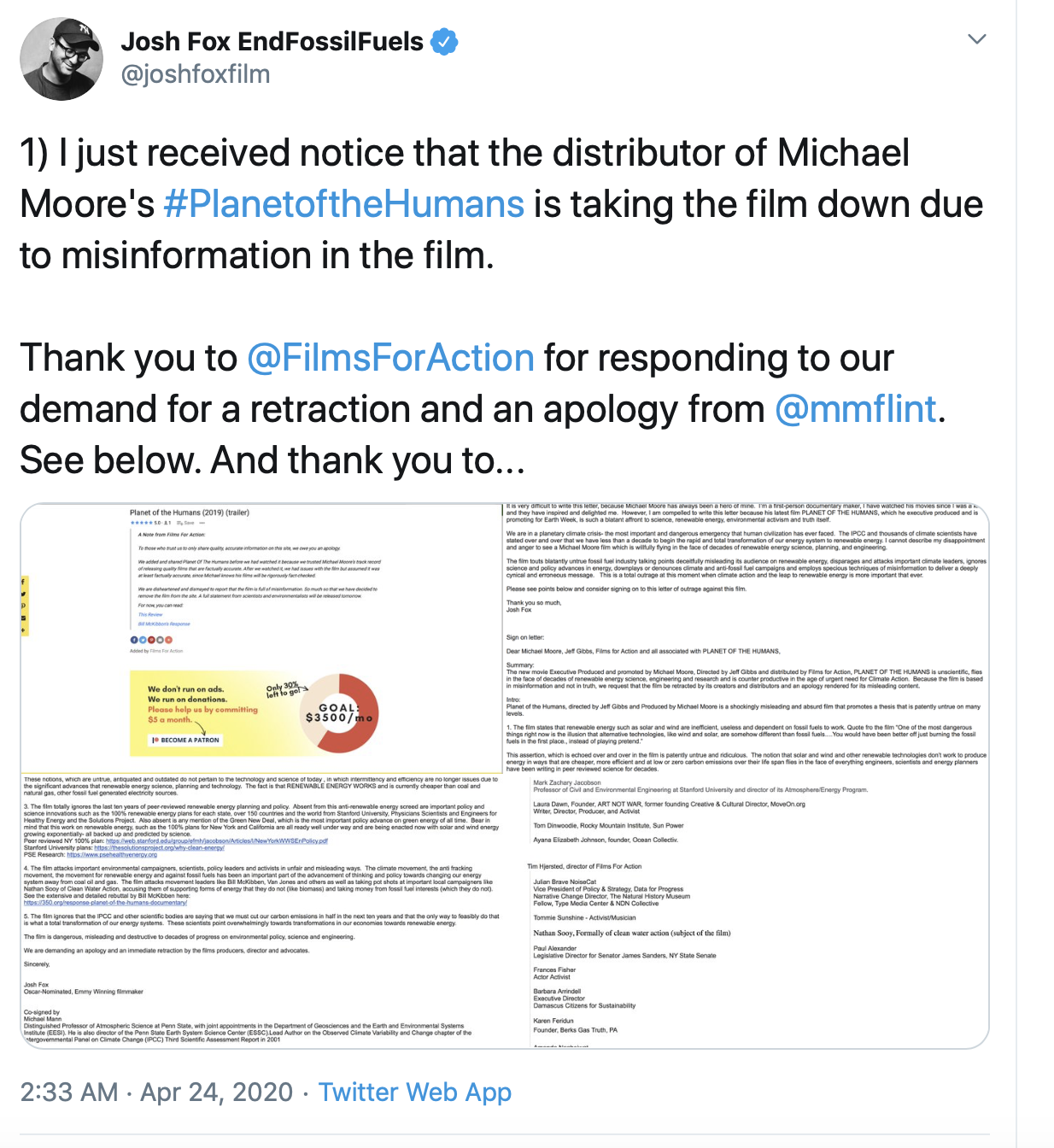 “I just received notice that the distributor of Michael Moore’s #PlanetoftheHumans is taking the film down due to misinformation in the film,” Fox wrote before criticizing Moore. “My hero has fallen. I have watched @MMFlint PUNCH UP at authority and hypocrisy with glee for his whole career. He has deeply inspired me and taught me. But now he’s the Goliath in the room, PUNCHING DOWN at us.”

Neither Fox, Mann nor “Planet of the Humans” have replied to the Daily Caller News Foundation’s request for comment.

Mann, a Pennsylvania State University professor, has been criticized in recent years for embellishing his credentials. Environmentalists wrote reviews of the film after it was posted for free on YouTube claiming that the movie relies on old, outdated information.

Fox is a proponent of the Green New Deal, a policy idea meant to aggressively transition the United States away from the oil industry.

EDITOR’S NOTE: “Planet of the Humans” posted a media advisory on its website noting that the film is distributed through Rumble Media and that the film is not affiliated with Films for Action.