Image Source: YouTube screenshot
BY CARLOS GARCIA
CNN’s climate correspondent Bill Weir lashed out at a report about his odd claims that the coronavirus pandemic was helping humanity deal with global warming, and that the virus was caused by deforestation.
Ditch the fake news ==> Click here to get news you can trust sent right to your inbox. It’s free!

Weir tweeted his displeasure against the report in the Washington Examiner and included a colorful expletive. 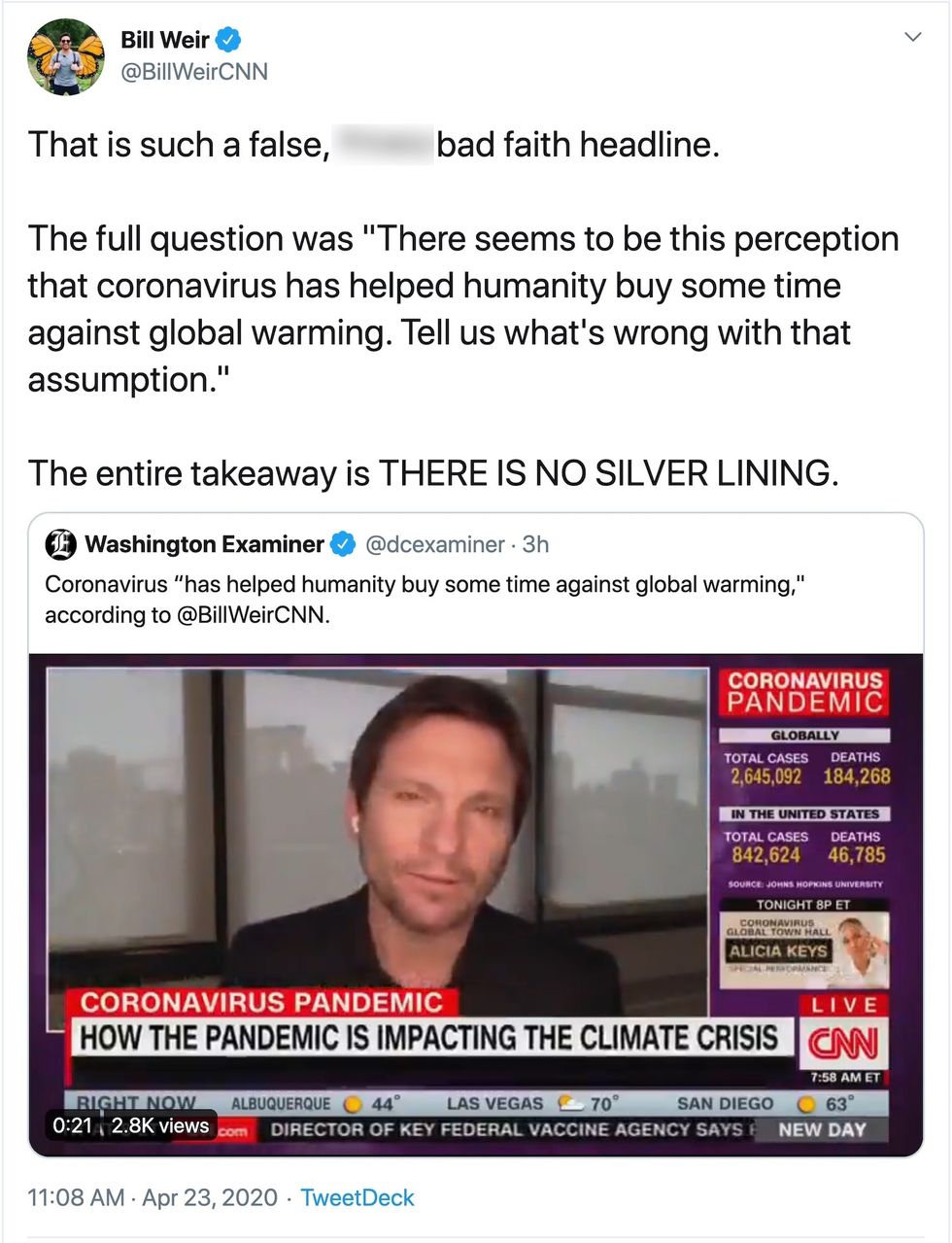 Image Source: Twitter screenshot“The full question was ‘There seems to be this perception that coronavirus has helped humanity buy some time against global warming. Tell us what’s wrong with that assumption.’ The entire takeaway is THERE IS NO SILVER LINING,” he explained.

While Weir is right that his report concludes that the economic shutdown from the coronavirus pandemic isn’t enough to combat global warming, it’s clear that he and the expert he consults are in favor of dismantling the economy.

“Um, we’d have to keep doing this even more and do it for the next 30 years to really begin to bend the curve on the greenhouse gases in the atmosphere,” said Foley.

“It’s kind of like having a really huge bathtub in the sky filled with pollution,” he explained. “We have the faucet pouring, pouring more in and all we’ve done is turned down the faucet a little bit, but it’s still filling up.”

In one airing of the segment on CNN, Weir attributed the cause of the coronavirus pandemic, which originated in Wuhan, China, to deforestation.

“Virologists for years tried to warn us that an invisible enemy would come out of the jungles if we just kept cutting all of them down, and they were right,” claimed Weir in sententious tone.

“So if any good can come of this,” he continued, “maybe it’s an understanding that the climatologists who are warning of an invisible enemy up in our skies and in our seas, maybe we should take them seriously too.”

Weir tore into another person posting the video of his comments, saying, “I’m sorry for whatever hurt you and sincerely hope you find some redemptive meaning in your life.”

Here’s the entire context of the CNN video: