Rolling Stone’s profile: ‘GRETA’S WORLD’ – ‘How one Swedish teenager armed with a homemade sign ignited a crusade and became the leader of a movement’

Must be from the same hallucination Greta the Climate Puppet had when she self-diagnosed with #covid19. https://t.co/KjPn5EcxD5

ere is persona and there is reality in Greta Thunberg. It is Valentine’s Day in her hometown of Stockholm, but there’s only wind, no hearts and flowers. A few hundred kids mill about, with a smattering of adults. If there were not signs reading “Our Earth, We Only Have One,” it could be mistaken for a field trip to the ABBA museum.

But where is Greta? I find a scrum of reporters interviewing a child in a purple puffer jacket, pink mittens, and a homemade-looking knit hat. It takes me a minute to realize that it’s Greta. She is 17, but could pass for 12. I can’t quite square the fiery speaker with the micro teen in front of me. She seems in need of protection.

Of course, this is emphatically wrong. Greta Thunberg has Asperger’s, which, she says, gives her pinpoint focus on climate minutiae while parrying and discarding even the smallest attempt at flattery. We stand near the Swedish Parliament house, where less than two years ago Thunberg started her Skolstrejk för klimatet, School Strike for Climate.

Back then, it was just Greta, a sign, and a lunch of bean pasta in a reusable glass jar. Then it was two people, and then a dozen, and then an international movement. I mention the bravery of her speeches, but she waves me away. She wants to talk about the loss of will among the olds.

The Price of Greed

“It seems like the people in power have given up,” says Thunberg, taking her hat off and pushing back her mussed up brown-blond hair. She remains on message despite the tourists and teens taking her picture and mugging behind us. “They say it’s too hard — it’s too much of a challenge. But that’s what we are doing here. We have not given up because this is a matter of life and death for countless people.”

It was my second encounter with Greta in three weeks. Back in January, before the Coronavirus brought the world to its knees, forcing Greta to move her Friday protests online, she was in Davos, Switzerland, for the annual conference of the World Economic Forum, where billionaires helo into the Swiss resort town and talk about solving the world’s problems without making their lives any harder. Thunberg had appeared last year and made her now iconic “Our House Is on Fire” speech, in which she declared the climate crisis to be the mortal threat to our planet. Solve it or all the other causes — feminism, human rights, and economic justice — would not matter.

“Either we choose to go on as a civilization or we don’t,” said Thunberg with cold precision. “That is as black or white as it gets. There are no gray areas when it comes to survival.”

The speech made Thunberg the unlikely and reluctant hero of the climate crisis. She crossed the ocean in a sailboat — she doesn’t fly for environmental reasons — to speak before the United Nations. She was nominated for the Nobel Peace Prize and was named Time magazine’s Person of the Year, conjuring the manic jealousy of Donald Trump, who called the honor “so ridiculous” and suggested she go to the movies and chill out.

In Davos, the illuminati prattled on about planting a trillion trees, even as we are still clear-cutting actual trees from the Amazon all the way to Thunberg’s beloved Sweden. This did not amuse nor placate the hoodie-wearing Greta. She seemed irritated and perhaps a little sick; she canceled an appearance the day before because she wasn’t feeling well. She was in no mood for flattery and nonsense. So when Time editor Edward Felsenthal asked her how she dealt with all the haters, Greta didn’t even try to answer diplomatically.

“I would like to say something that I think people need to know more than how I deal with haters,” she answered, before launching into details from the Intergovernmental Panel on Climate Change’s latest report. She mentioned that if we are to have even a 67 percent chance of limiting global temperature change to under 1.5 C, the point where catastrophic changes begin, we have less than 420 gigatons of CO2 that we can emit before we pass the no-going-back line. Thunberg stated that, at the current rate, we have eight years to change everything.

Thunberg’s face was controlled fury. This was the persona: an adolescent iron-willed truth teller. The Davos one-percenters clapped and rattled their Rolexes. It has become a disconcerting pattern for Thunberg appearances that would be repeated at the European Commission: Greta tells the adults they are fools and their plans are lame and shortsighted. They still give her a standing ovation. A few minutes later, she was gone and the audience dispersed into a fleet of black BMWs and Mercedes, belching diesel into the Alpine sky. 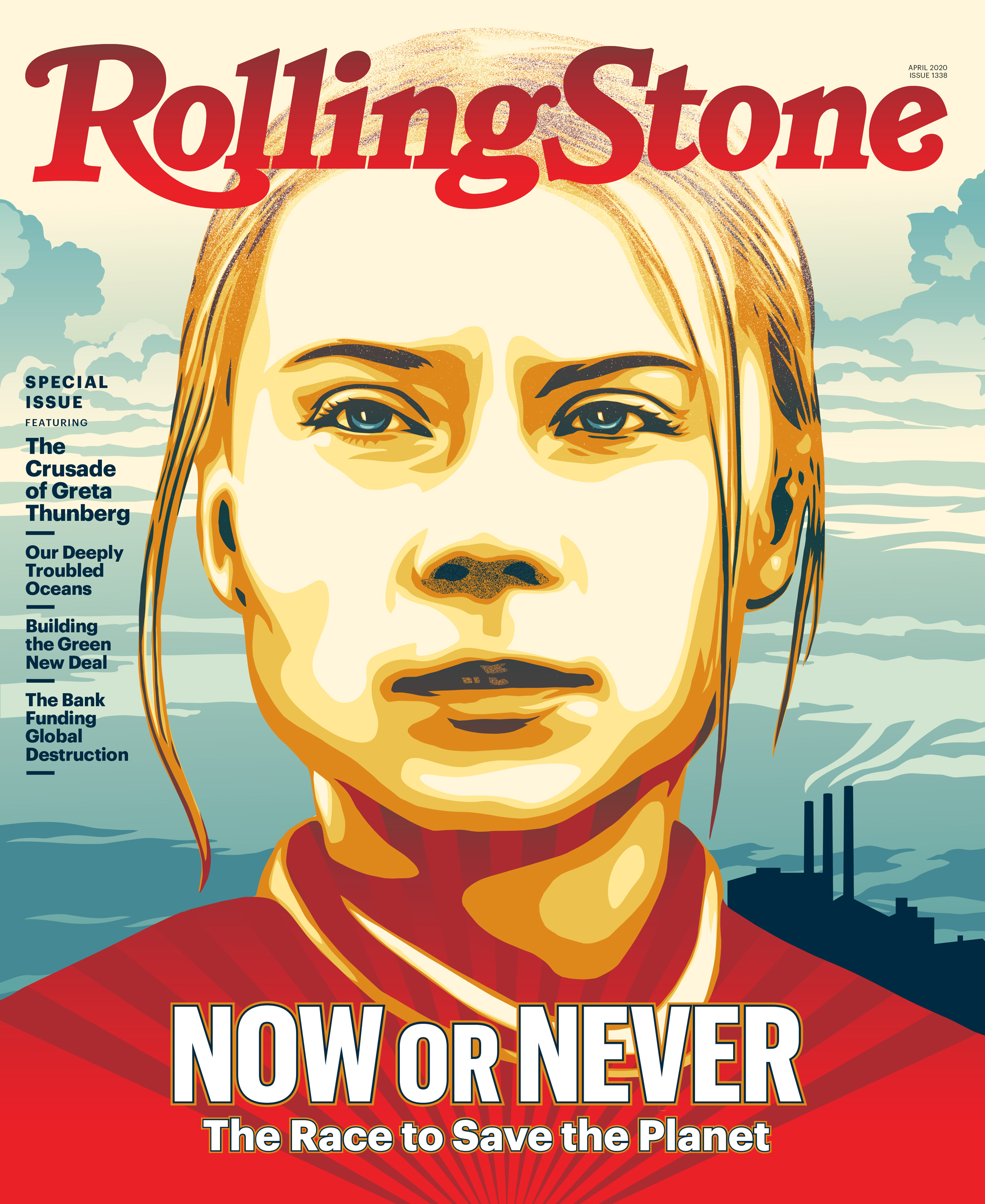 Greta Thunberg illustration by Shepard Fairey.
Based on a photograph by Markus Schreiber/AP Images/Shutterstock

My Greta travels featured a Vancouver-Zurich round trip and then an L.A.-Stockholm trip. In between, I fly from Vancouver to L.A. for another story. It’s the job, but I take stock in horror and calculate that my three flights burn more carbon than the yearly usage of the average citizen of more than 200 countries. I torch the atmosphere so I can hear others praise the girl who won’t fly.

“The phrase ‘A little child shall lead them’ has come to mind more than once,” Al Gore tells me in Davos, before sharing his favorite Greta moment. It was at the U.N. summit last fall. “She said to the assembled world leaders, ‘You say you understand the science, but I don’t believe you. Because if you did and then you continue to act as you do, that would mean you’re evil. And I don’t believe that.’” Gore shook his head in wonderment. “Wow.” He then gives a history lesson: “There have been other times in human history when the moment a morally-based social movement reached the tipping point was the moment when the younger generation made it their own. Here we are.”

Activist-actress Jane Fonda was so inspired by Greta that she has been hosting a series of Fire Drill Fridays. “I was just filled with depression and hopelessness, and then I started reading about Greta,” Fonda tells me one winter afternoon in Los Angeles. “She inspired me to get out there and do more.”

But in Stockholm, the world of presidential taunts, former vice presidents slathering praise, and Oscar winners rhapsodizing seems far away.

Outside of the Parliament building, Greta tells me she doesn’t worry about her safety despite Trump and others speaking cruelly about her on social media. (According to her mother, locals have shoved excrement into the family mailbox.) Later in February, she would march in Bristol, England, and be met by social media posts suggesting she deserved to be sexually assaulted.