Extinction Rebellion tries to distance itself from stickers declaring: ‘Corona is the cure, humans are the disease’ 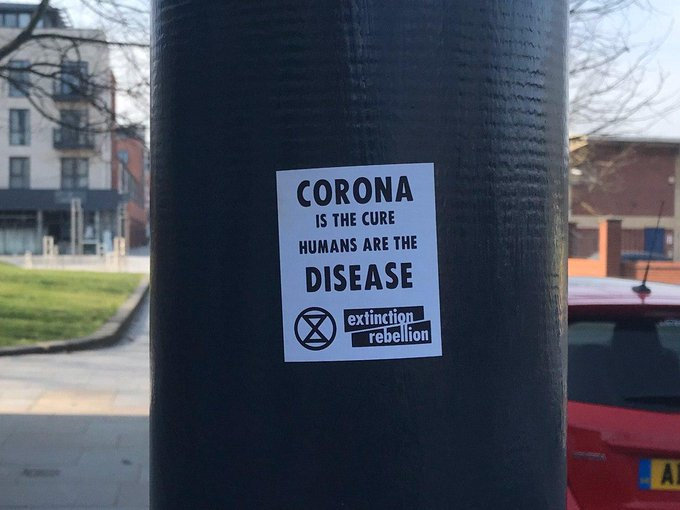 Extinction Rebellion self-describes as a:

Extinction Rebellion has distanced itself from stickers purporting to be from the campaign group which state: “Corona is the cure, humans are the disease.”

A Twitter account with the name “XREastMidlands” shared photos of stickers featuring the message, alongside the Extinction Rebellion – also known as XR – branding.

In a further post, it added that coronavirus could be a “natural response from the living Earth to the damage humanity has inflicted on it, for centuries”.

However, a statement from the group’s central team, given to the Standard, said: “The Twitter account in question is not recognised by Extinction Rebellion East Midlands or Extinction Rebellion UK and we do not support in any way the positions expressed on that account.”

The group went on to suggest there was a broader campaign of misinformation targeting its work.

In a twitter post, Extinction Rebellion UK said information “with messaging that is not in line with what XR believes or stands for” was being shared by “far right” adversaries, adding: “Please get in touch with us if you see any anywhere. Look after yourselves.”

The group apologised earlier in the coronavirus outbreak when activists were encouraged to self-isolate in tree houses to protest HS2.

However, this was swiftly retracted and an apology issued.

Extinction Rebellion also cancelled a mass London gathering planned due to the virus.

The group rose to prominence last year with mass protests across London which brought swathes of the city to a standstill.