In Venice, the often murky canals recently began to get clearer, with fish visible in the water below. Italy’s efforts to limit the coronavirus meant an absence of boat traffic on the city’s famous waterways. And the changes happened quickly.

Countries that have been under stringent lockdowns to stop the spread of the coronavirus have experienced an unintended benefit. The outbreak has, at least in part, contributed to a noticeable drop in pollution and greenhouse gas emissions in some countries.

Although grim, it’s something scientists said could offer tough lessons for how to prepare — and ideally avoid — the most destructive impacts of climate change.

“If we can think about how to prepare for climate change like a pandemic, maybe there will be a positive outcome to all of this,” said Christopher Jones, lead developer of the CoolClimate Network, an applied research consortium at the University of California, Berkeley. “We can help prevent crises in the future if we are prepared. I think there are some big-picture lessons here that could be very useful.”

The coronavirus pandemic has sickened more than 180,000 people and killed more than 7,100 worldwide since early January. Some countries, most notably China and Italy, have been forced to seal their borders and restrict residents’ movements to control the rates of infection.

Full coverage of the coronavirus outbreak

Satellite observations have shown that the temporary measures have also driven significant decreases in harmful emissions.

“Carbon dioxide is tied to industrial activity, electricity production and transportation, so anything that affects those sectors will impact greenhouse gases, as well,” Jones said. 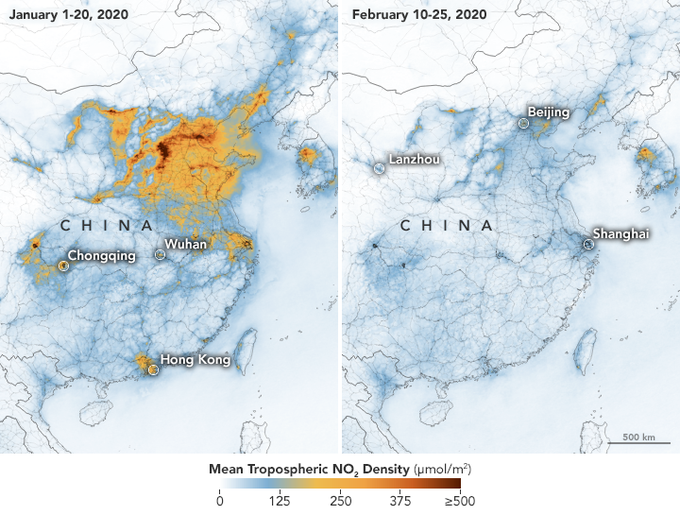 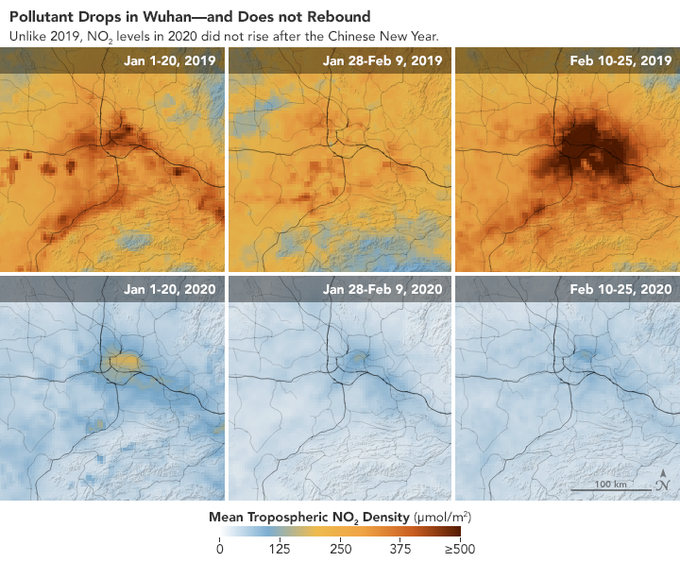 817 people are talking about this

The coronavirus first emerged in late December in Wuhan, China. As it rapidly spilled into neighboring regions, the Chinese government locked down the city, quarantining 11 million people in Wuhan. Eventually, the lockdown would include almost 60 million people in the province of Hubei.

Industrial operations in the coronavirus hot spot ground to a halt, and travel restrictions within China meant that air, rail and road traffic were paused or scaled back across some regions.

According to Lauri Myllyvirta, an analyst at the Centre for Research on Energy and Clean Air in Finland, the restrictions contributed to a 25 percent drop in China’s carbon dioxide emissions over four weeks beginning in late January, compared to the same time last year.

Myllyvirta’s analysis also found that industrial operations were reduced by 15 percent to 40 percent in some sectors and that coal consumption at power plants fell by 36 percent.

Pollution-monitoring satellites operated by NASA and the European Space Agency observed drastic decreases in air pollution over China over two weeks in February when the quarantine was in effect. The satellites measured concentrations of nitrogen dioxide, which is released by cars, power plants and industrial facilities, from Jan. 1 to Jan. 20 and again from Feb. 10 to Feb. 25. The difference was unmistakable.