‘Mind-Boggling Cost Of Net Zero’: It’s Time For An Honest Debate About The Cost Of UK’s Net Zero Emission Targets 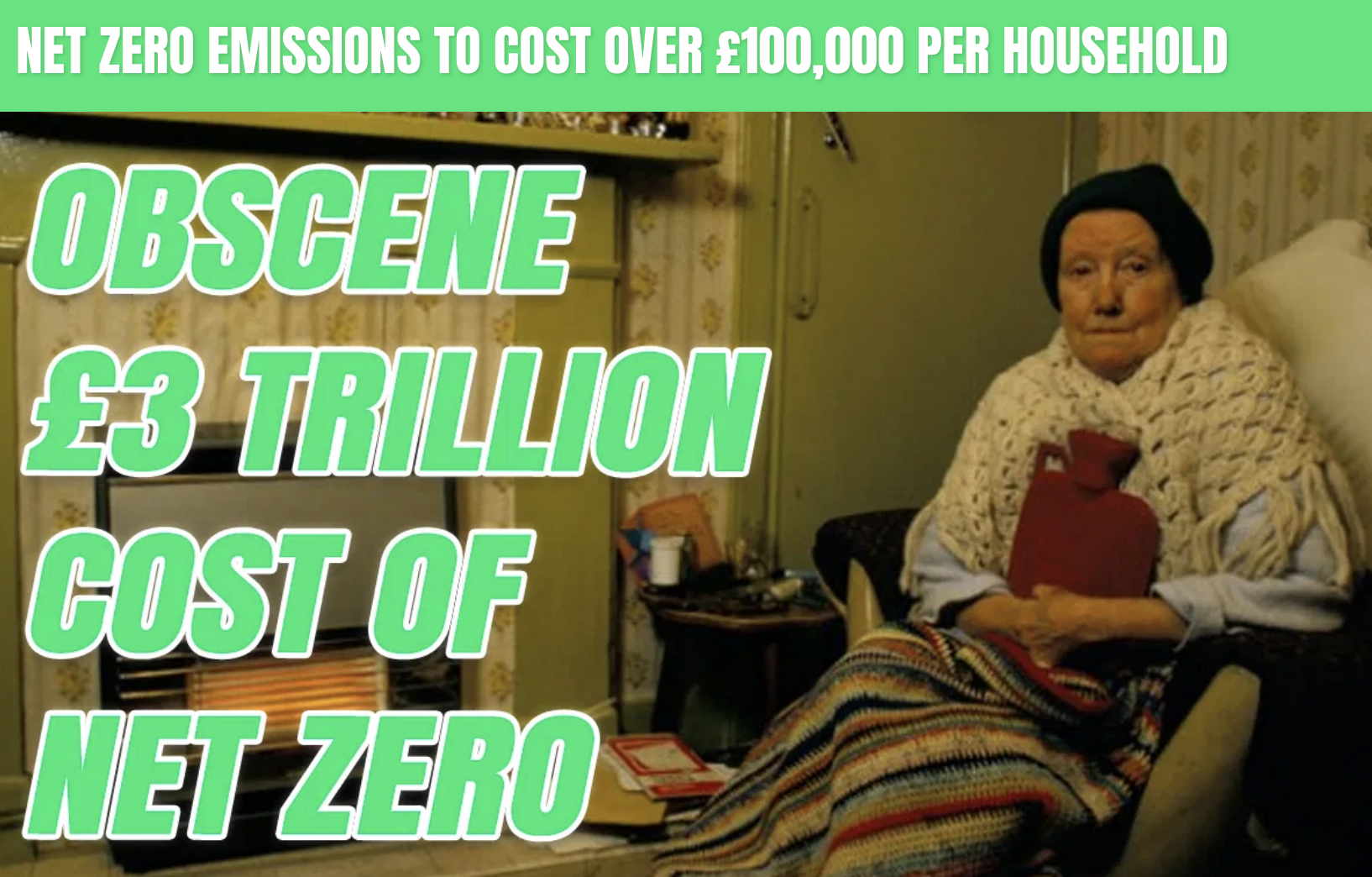 Andrew Montford: It’s Time For An Honest Debate About The Cost Of Net Zero
The Spectator, 24 February 2020

When the Committee on Climate Change (CCC) launched its report on the feasibility of entirely decarbonising the UK economy, we were told the expense involved was manageable. The CCC’s chief executive Chris Stark explained that the project ‘carried a cost – of one to two per cent of GDP – which was affordable’. His claims were noted approvingly by MPs during debates in Parliament on whether to enshrine a ‘net zero’ emissions target in law.

While others complained about the lack of a clear cost-benefit case, CCC chairman Lord Deben put aside these concerns. He told the Lords: ‘the report has been recognised universally as the most seriously presented, costed effort…’ A recent leader in The Spectator said the CCC had been ‘admirably candid.’ If only.

The truth is that the CCC has not given a full estimate of its net-zero target. The only fact it has offered is that the cost would be one to two of GDP in the year 2050. It makes no statement about the cost before then. We only know this because of a response to a Freedom of Information request. So how much it will cost to get to net zero? Contrary to what The Spectator assured its readers, we still don’t know. In other words, it has not actually prepared a costing of the net zero project at all. This is an extraordinary admission given what Lord Deben said in the Lords debate.

Not long ago, another CCC member, the director of the Institute for Fiscal Studies, Paul Johnson, told The Week in Westminster that ‘the cost of getting to net zero by 2050 will be in the order of one to two per cent national income, each year between now and then’.

But how can this possibly be when no estimates have been prepared for all those intervening years? As Mr Johnson is not saying, and the CCC refuse to comment – or reveal the calculations behind the one to two per cent figure they quote so frequently – it is hard to have much confidence that the decision to go net zero is well founded.

We are embarked on a journey towards an economic revolution, some might argue to economic disaster. Yet those in charge don’t even seem to ask any basic questions about how much it’s all going to cost.

The Treasury itself has yet to complete an assessment. A leak to the FT last summer cited a letter from Philip Hammond (when he was chancellor) to the effect that the ‘CCC has estimated that reaching net zero will cost £50bn a year, but the department for Business, Energy and Industrial strategy puts the figure at £70bn’.

Hammond was quoted as saying ‘on the basis of these estimates, the total cost of transitioning to a zero-carbon economy is likely to be well in excess of a trillion pounds.’ It could, of course, be far more. But we don’t know because none of the government departments involved have published a definitive statement on costs. Even the CCC haven’t done the sums.

The Commons Treasury Select Committee, meanwhile, decided to hold an inquiry into the economic opportunities of net zero; the bill to be paid at the end is apparently of little interest. Ofgem, allegedly the voice of the consumer in energy matters, has given no specific cost either, instead turning itself into a sort of corporate cheerleader for the net zero project. A joint report from the Royal Academy of Engineering and Royal Society looks remarkably like the CCC’s – lots of buzzwords, precious little engineering and hardly any mention of specific costs.

Only Conservative MP Christopher Chope has looked to get to the bottom of the matter, launching a private members bill to force an independent review of the costs. Its chances of becoming law are slim of course.

In the meantime, however, outsiders can come up with their own figures. My colleagues at the Global Warming Policy Foundation (GWPF) have made a start, looking at National Grid’s plans for delivering a (near) zero-carbon electricity grid. National Grid, like everyone else, doesn’t cost these so-called ‘Future Energy Scenarios’, but the authors of the GWPF paper have done so, and reckon the bill will come in at around £1.4 trillion. And that is just the cost of the generating equipment – government levies and so on are extra. It amounts to around £50,000 per household, to be paid through soaring electricity bills, higher taxes, and higher prices for goods and services.

It is beyond belief that Boris Johnson, Dominic Cummings and indeed most Tory MPs are yet to realise that such costs are not going to go down well with voters.

IS THE decision to reduce net carbon dioxide emissions to zero by 2050 one of extraordinary ambition or extreme foolhardiness? What we know for certain is that it isn’t an example of ‘evidence-based policymaking’. The Government and Parliament have given little thought to how it might be achieved, and how much it might cost.

Rather than publish their own estimates, they have outsourced this crucial task to the Committee on Climate Change (CCC). This is the organisation chaired by Lord Deben, who himself receives vast sums from green business interests through his ‘sustainability consultancy’ Sancroft. Sancroft’s clients include Drax, the largest recipient of renewable energy subsidies in the UK. If that wasn’t bad enough, Drax have also effectively appointed their own ‘Head of Sustainability’ to the CCC. These are the very last people you would go to for an independent assessment.

The CCC have kindly informed Parliament that the cost of achieving net zero emissions will be between 1 per cent and 2 per cent of GDP in 2050, with a headline figure of £50 billion. The small print of their report describes how at least half of this cost is due to increasing the target from an 80 per cent to a 100 per cent reduction in emissions. Very quietly, MPs appear to have nodded through a doubling of the cost of British climate policy with no real debate and no objections.

The limited information they received was misleading. The CCC’s estimate was for only a single year, 2050, despite the fact that there would be enormous capital costs in the intervening years. When blogger Ben Pile asked for estimates for the years from 2020-2049, he was told that such estimates did not exist.

Equally significantly, they would not explain their methodology. This means that it is impossible to say how reliable an estimate this is, or subject it to any scrutiny. The Government is therefore relying on an estimate that it can’t possibly explain or understand, because the CCC themselves cannot explain it.

Behind the scenes there are signs of private concern within Government that it will cost much more. Before they both left office, Philip Hammond wrote a letter to Theresa May warning that the Department for Business, Energy and Industrial Strategy (BEIS) had estimated the cost would be 40 per cent higher, at £70billion per annum. This would mean households paying an average of £2,400 every year between now and 2050.

Unfortunately, BEIS has now gone all quiet, and the Government appears reluctant to admit that these calculations ever existed.

The GWPF was determined to get to the bottom of how much Net Zero might cost, so we commissioned some of the best in the business to apply their expertise to this important question. Their work has now been published in a selection of new reports. Unlike the CCC and the Government, our calculations are there for everyone to see, and we hope that they will trigger an important debate about the costs of Net Zero.

Michael Kelly is emeritus Prince Philip Professor of Technology at the University of Cambridge, and a fellow of both the Royal Society and the Royal Academy of Engineering. His report, Decarbonising Housing: The Net Zero Fantasy, looks at data from pilot studies to refine his cost estimates of achieving an 80 per cent decarbonisation target through retrofitting existing homes. That is, to make them more energy efficient by improving insulation, draught-proofing, cladding etc.

The other side of the coin is electricity. Not only is it proposed that the National Grid completely decarbonise, but it must also expand significantly to power the electrification of transport and heat. Both Dr Capell Aris and Colin Gibson have decades of experience in the power sector, and they have used a levelised cost of energy (LCOE) approach to calculate the additional costs of a renewables-based grid compared to one based on gas generation. LCOE can be thought of as the minimum constant prices at which electricity must be sold in order to break even over the lifetime of the project (in present value terms).

Their analysis in The Future of GB Electricity Supply: Security, Cost and Emissions in a Net-zero System, explains that to deliver net zero carbon emissions you would have to build far more wind turbines than is necessary merely to cover peak energy demand. This is because wind cannot be relied upon to deliver power when it is needed. In this scenario, generation will also often exceed demand when it is windy, meaning that power cannot be used. The additional capital costs of building what is termed as overcapacity, and cost of paying wind turbines to switch off on windy days, entail a far more expensive system. In monetary terms, the cost is £1.4trillion higher than in a scenario dominated by gas-fired power stations.

In theory, you could deliver net zero with a zero-carbon electric grid, and not have to bother about energy efficiency (albeit still making significant investments in heat pumps to replace gas boilers). In reality, a combination of approaches is needed to offset the price increases expected under electric heating systems that would otherwise make them even more unpalatable. Indeed, the National Grid assume reductions of 10-26 per cent in the demand for heat in their net zero compliant scenarios.

Andrew Montford has looked at both new papers in the round to calculate the total costs of reaching net zero. He concludes in £3Trillion and Counting: Net Zero and the National Ruin that these costs would in all likelihood exceed £3trillion once additional investments in decarbonising industry and transport were taken into account.