Physicist: No Evidence That Snow Is Disappearing 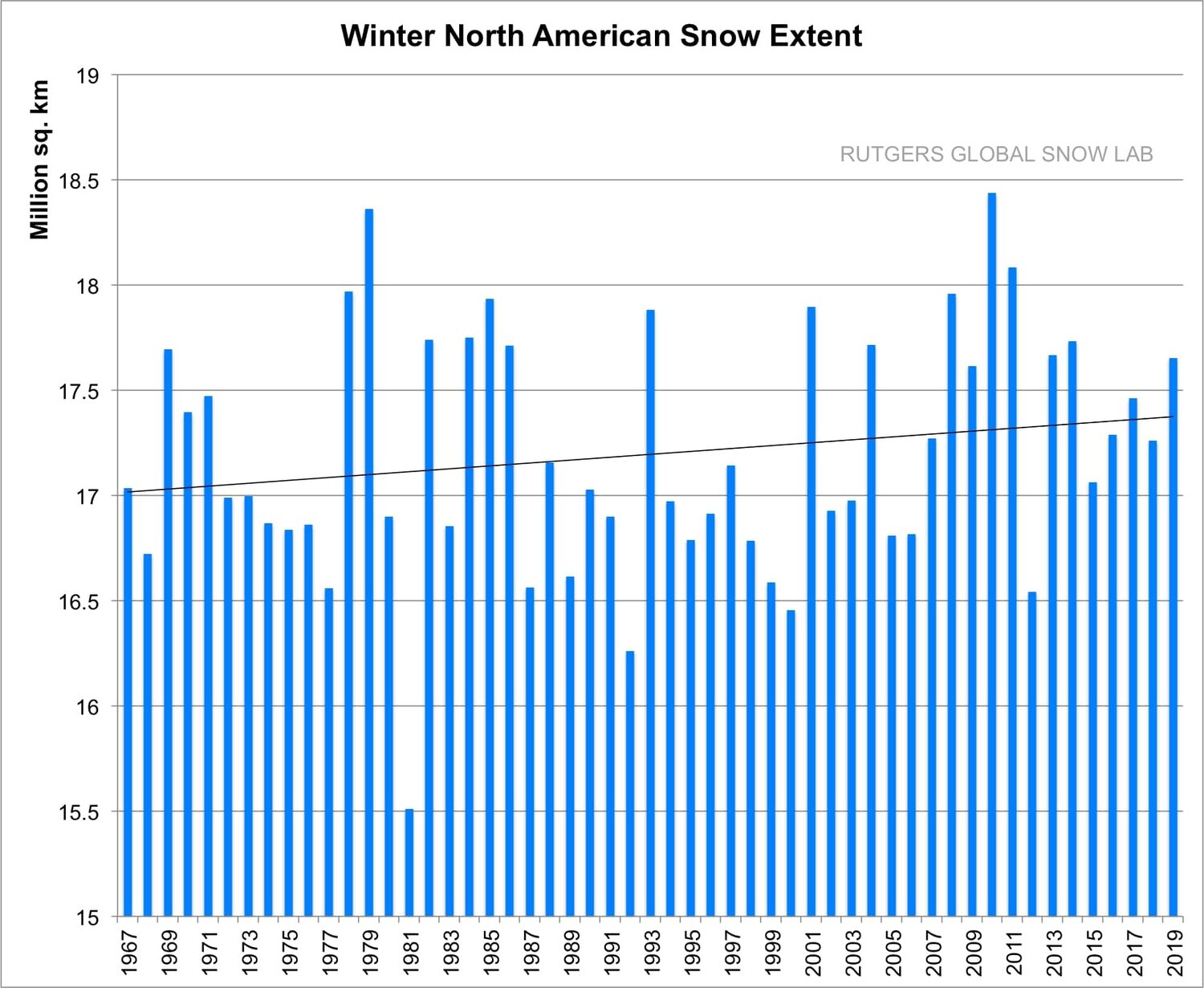 You wouldn’t know it from mainstream media coverage but, far from disappearing, annual global snowfall is actually becoming heavier as the world warms. This is precisely the opposite of what climate change alarmists predicted as the global warming narrative took shape decades ago.

The prediction of less snowy winters was based on the simplistic notion that a higher atmospheric temperature would allow fewer snowflakes to form and keep less of the pearly white powder frozen on the ground. But, as any meteorologist will tell you, the crucial ingredient for snow formation, apart from near-freezing temperatures, is moisture in the air. Because warmer air can hold more water vapor, global warming in general produces more snow when the temperature drops.

This observation has been substantiated multiple times in recent years, in the Americas, Europe and Asia. As just one example, the eastern U.S. has experienced 29 high-impact winter snowstorms in the 10 years from 2009 though 2018. There were never more than 10 in any prior 10-year period.

The overall winter snow extent in the U.S. and Canada combined is illustrated in the figure below, which shows the monthly extent, averaged over a year, from 1967 to 2019. Clearly, total snow cover is increasing, not diminishing.

In the winter of 2009-10, record snowfall blanketed the entire mid-Atlantic coast of the U.S. in an event called Snowmaggedon, contributing to the record total for 2010 in the figure above. The winter of 2013-14 was the coldest and snowiest since the 1800s in parts of the Great Lakes. Further north in Canada, following an exceptionally cold winter in 2014-15, the lower mainland of British Columbia endured the longest cold snap in 32 years during the winter of 2016-17. That same winter saw record heavy Canadian snowfalls, in both British Columbia in the west and the maritime provinces in the east.

The trend toward snowier winters is reflected in the number of North American blizzards over the same period, depicted in the next figure. Once again, it’s obvious that snow and harsh conditions have been on the rise for decades, especially as the globe warmed from the 1970s until 1998. 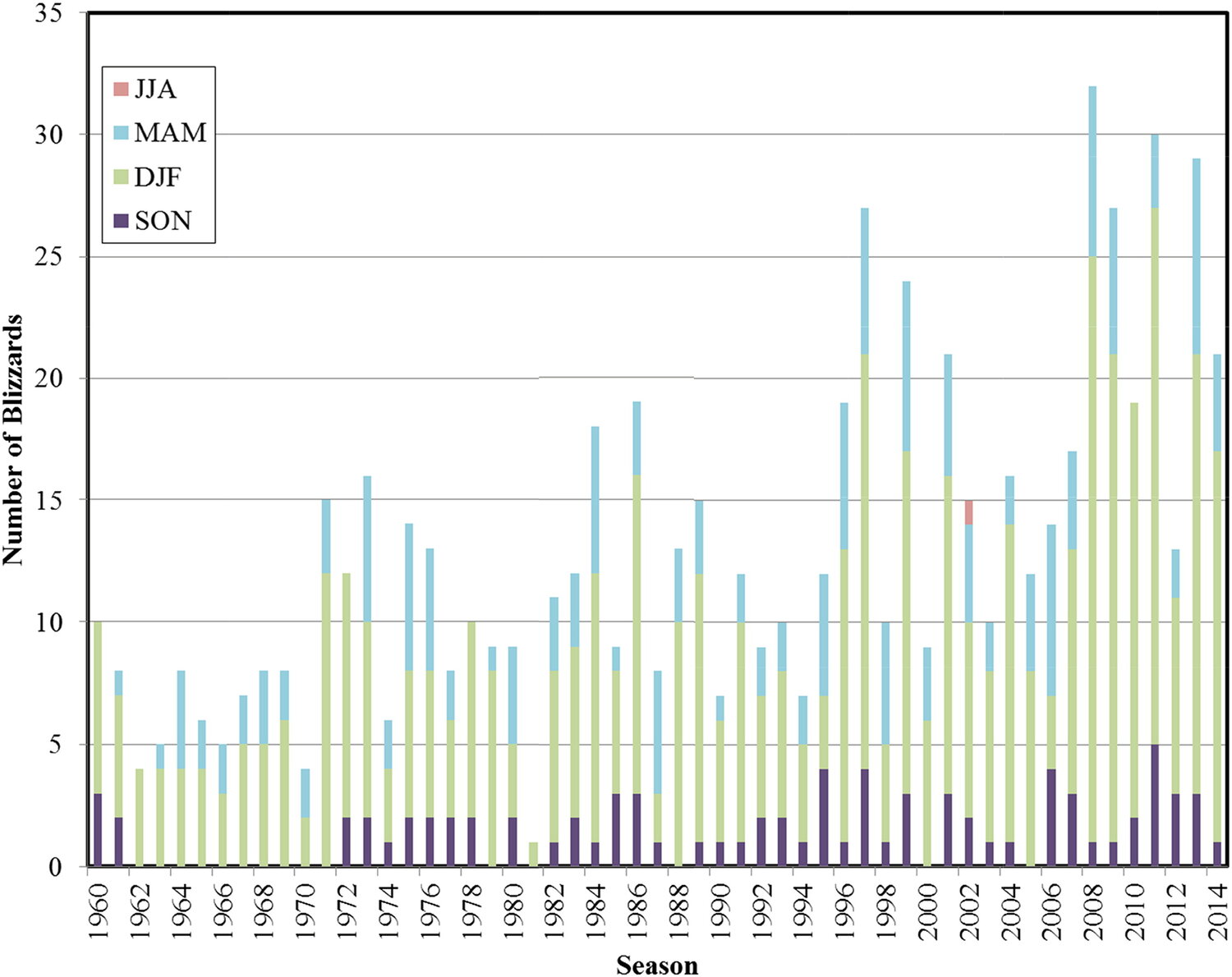 But truckloads of snow haven’t fallen only in North America. The average yearly winter snow extent for the whole Northern Hemisphere from 1967 to 2019, illustrated in the following figure, shows a trend identical to that for North America. 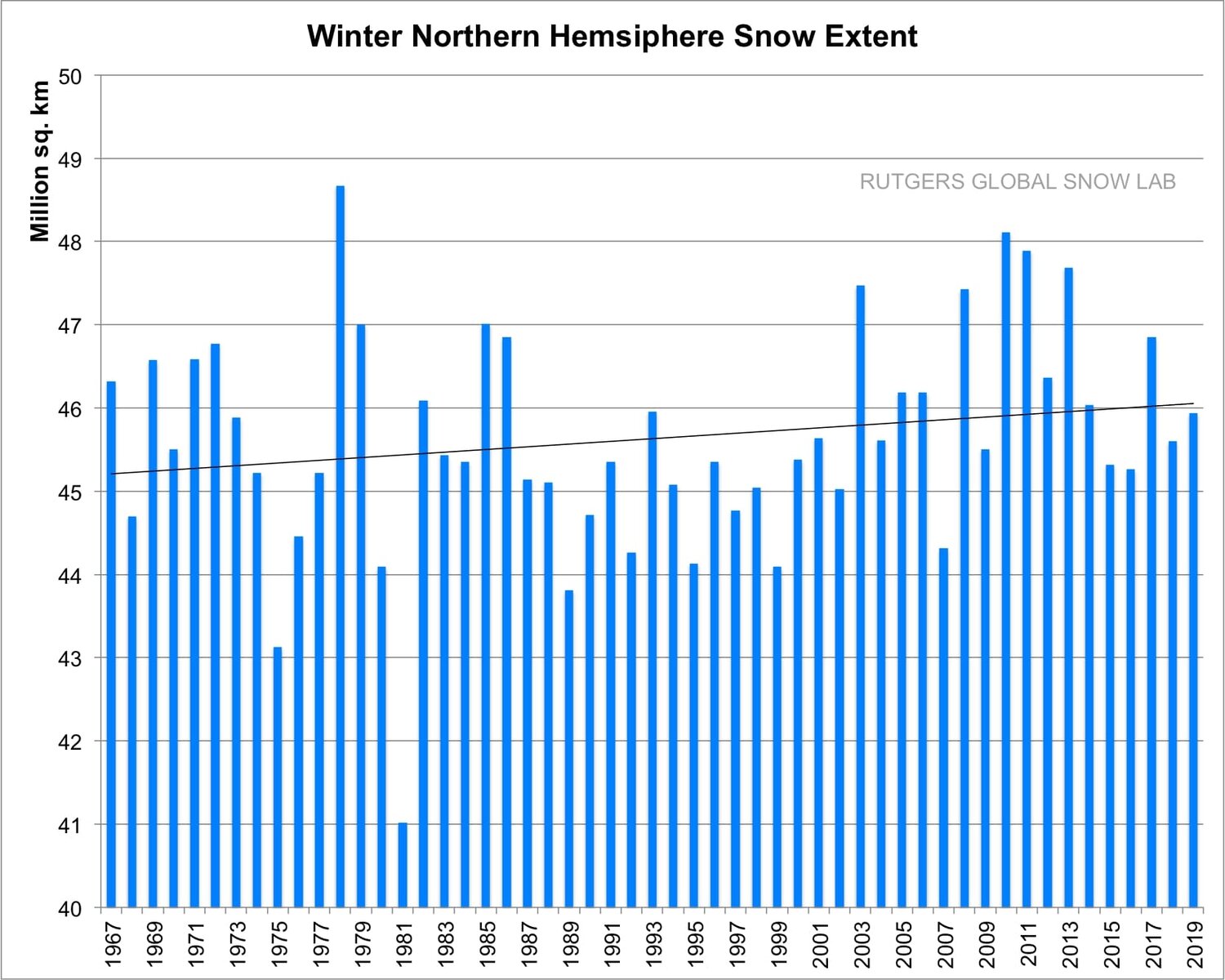 Specific examples include abnormally chilly temperatures in southern China in January 2016, accompanying the first snow in Guangzhou since 1967 and the first in nearby Nanning since 1983. Extremely heavy snow that fell in the Panjshir Valley of Afghanistan in February 2015 killed over 200 people. During the winters of 2011-12 and 2012-13, much of central and eastern Europe experienced very cold and snowy weather, as they did once more in the winter of 2017-18. Eastern Ireland had its heaviest snowfalls for more than 50 years with totals exceeding 50 cm (20 inches).

Despite all this evidence, numerous claims have been made that snow is a thing of the past. “Children just aren’t going to know what snow is,” opined a research scientist at the CRU (Climatic Research Unit) of the UK’s University of East Anglia back in 2000. But, while winter snow is melting more rapidly in the spring and there’s less winter snow in some high mountain areas, the IPCC (Intergovernmental Panel on Climate Change) and WMO (World Meteorological Organization) have both been forced to concede that it’s now snowing more heavily at low altitudes than previously. Surprisingly, the WMO has even attributed the phenomenon to natural variability – as it should.

The IPCC and WMO, together with climate alarmists, are fond of using the term “unprecedented” to describe extreme weather events. As we’ve seen in previous blog posts, such usage is completely unjustified in every case – with the single exception of snowfall, though that’s a concession few alarmists make.