Al Gore Gushes About Greta Thunberg: ‘Nobody Speaks Truth to Power as She Does’ 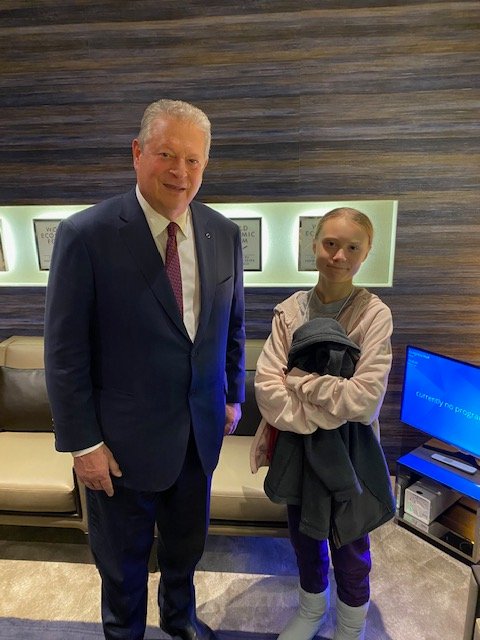 Former Vice President Al Gore lauded climate activist Greta Thunberg after meeting with the Swedish teenager at the World Economic Forum in Davos, Switzerland, declaring, “Nobody speaks truth to power as she does.”

“Great to see @GretaThunberg at #WEF20 today. Once again, I was struck by her potent and sobering call to action. Nobody speaks truth to power as she does,” Gore, a climate activist himself, wrote on Twitter, sharing a photo of the pair.

Great to see @GretaThunberg at #WEF20 today. Once again, I was struck by her potent and sobering call to action. Nobody speaks truth to power as she does: “Our house is still on fire. Your inaction is fueling the flames by the hour.” https://www.nytimes.com/2020/01/21/climate/greta-thunberg-davos-transcript.html …

7,453 people are talking about this

At this year’s World Economic Forum gathering, Thunberg accused world leaders of inaction when it comes to protecting children against climate change.

Unlike you, my generation will not give up without a fight. The facts are clear, but they are still too uncomfortable for you to address. You just leave it because you think it’s too depressing and people will give up. But people will not give up. You’re the ones who are giving up.

I wonder what will you tell your children was the reason to fail and leave them facing a climate chaos that you knowingly brought upon them. That it seemed so bad for the economy that we decided to resign the idea of securing future living conditions without even trying? Our house is still on fire.

President Donald Trump blasted climate “prophets of doom” and called for the rejection of “predictions of the apocalypse” in his speech before the forum, though he did not name Thunberg, who sat in the audience.

“These alarmists always demand the same thing – absolute power to dominate, transform, and control every aspect of our lives,” he said. “We’re committed to conserving the majesty of God’s creation and the natural beauty of our world.”