Physicist: No Evidence That Marine Heat Waves Are Unusual

A new wrinkle in the narrative of human-induced global warming is the observation and study of marine heat waves. But, just as in other areas of climate science, the IPCC (Intergovernmental Panel on Climate Change) twists and hypes the evidence to boost the claim that heat waves at sea are becoming more common.

Marine heat waves describe extended periods of abnormally high ocean temperatures, just like atmospheric heat waves on land. The most publicized recent example was “The Blob,” a massive pool of warm water that formed in the northeast Pacific Ocean from 2013 to 2015, extending all the way from Alaska to the Baja Peninsula in Mexico as shown in the figure below, and up to 400 meters (1,300 feet) deep. Sea surface temperatures across The Blob averaged 3 degrees Celsius (5 degrees Fahrenheit) above normal. A similar temperature spike lasting for eight months was seen in Australia’s Tasman Sea in 2015 and 2016. 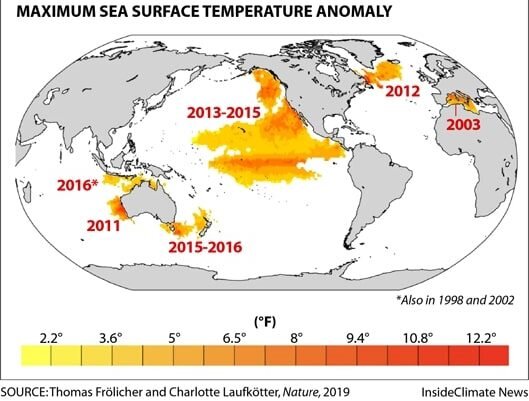 The phenomenon has major effects on marine organisms and ecosystems, causing bleaching of coral reefs or loss of kelp forests, for example. Shellfish and small marine mammals such as sea lions and sea otters are particularly vulnerable, because the higher temperatures deplete the supply of plankton at the base of the ocean food chain. And toxic algae blooms can harm fish and larger marine animals. 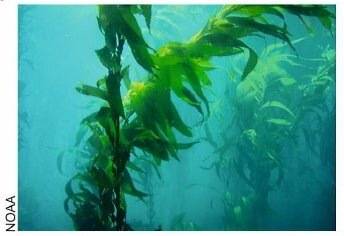 Larger marine heat waves not only affect maritime life, but may also influence weather conditions on nearby land. The Blob is thought to have worsened California’s drought at the time, while the Tasman Sea event may have led to flooding in northeast Tasmania. The IPCC expresses only low confidence in such connections, however.

Nevertheless, in its recent Special Report on the Ocean and Cryosphere in a Changing Climate, the IPCC puts its clout behind the assertion that marine heat waves doubled in frequency from 1982 to 2016, and that they have also become longer-lasting, more intense and more extensive. But these are false claims, for two reasons.

First, the observations supporting the claims were all made during the satellite era. Satellite measurements of ocean temperature are far more accurate and broader in coverage than measurements made by the old-fashioned methods that preceded satellite data. These cruder methods included placing a thermometer in seawater collected in wooden, canvas or insulated buckets tossed overboard from ships and hauled back on deck, or in seawater retained in ship engine-room inlets from several different depths; and data from moored or drifting buoys.

Because of the unreliability and sparseness of sea surface temperature data from the pre-satellite era, it’s obvious that earlier marine heat waves may well have been missed. Indeed, it would be surprising if no significant marine heat waves occurred during the period of record-high atmospheric temperatures of the 1930s, a topic discussed in a previous blog post. A NOAA (U.S. National Oceanic and Atmospheric Administration) scientist has cited a very intense marine heat wave in the Pacific recorded in 1958, during a 30-year period of global cooling.

The second reason the IPCC claims are spurious is that most of the reported studies (see for example, here and here) fail to take into account the overall ocean warming trend. Marine heat waves are generally measured relative to the average surface temperature over a 30-year baseline period. This means that any heat wave measured toward the end of that period will appear hotter than it really is, since the actual surface temperature at that time will be higher than the 30-year baseline. As pointed out by another NOAA scientist, not adjusting for the underlying warming falsely conflates natural regional variability with climate change.

Even if the shortcomings of the data are ignored, it’s been found that from 1925 to 2016, the global average marine heatwave frequency and duration increased by only 34% and 17%, respectively – hardly dramatic increases. And in any case, the sample size for observations made since satellite observations began in 1982 is statistically small.

There’s no evidence, therefore, that marine heat waves are anything out of the ordinary.

Next: No Evidence That Snow Is Disappearing