Ocean Acidification: No Evidence of Impending Harm to Sea Life

Apocalyptic warnings about the effect of global warming on the oceans now embrace ocean acidification as well as sea-level rise and ocean heating, both of which I’ve examined in previous posts. Acidification is a potential issue because the oceans absorb up to 30% of our CO2 emissions, according to the UN’s IPCC (Intergovernmental Panel on Climate Change). The extra CO2 increases the acidity of seawater.

But there’s no sign that any of the multitude of ocean inhabitants is suffering from the slightly more acidic conditions, although some species are affected by the warming itself. The average pH – a measure of acidity – of ocean surface water is currently falling by only 0.02 to 0.03 pH units per decade, and has dropped by only 0.1 pH units over the whole period since industrialization and CO2 emissions began in the 18th century. These almost imperceptible changes pale in comparison with the natural worldwide variation in ocean pH, which ranges from a low of 7.8 in coastal waters to a high of 8.4 in upper latitudes.

The pH scale sets 7.0 as the neutral value, with lower values being acidic and higher values alkaline. It’s a logarithmic scale, so a change of 1 pH unit represents a 10-fold change in acidity. A decrease of 0.1 units, representing a 26% increase in acidity, still leaves the ocean pH well within the alkaline range.

The primary concern with ocean acidification is its effect on marine creatures – such as corals, some plankton, and shellfish – that form skeletons and shells made from calcium carbonate. The dissolution of CO2 in seawater produces carbonic acid (H2CO3), which in turn produces hydrogen ions (H+) that eat up any carbonate ions (CO32-) that were already present, depleting the supply of carbonate available to calcifying organisms, such as mussels and krill, for shell building.

Yet the wide range of pH values in which sea animals and plants thrive tells us that fears about acidification from climate change are unfounded. The figure below shows how much the ocean pH varies even at the same location over the period of one month, and often within a single day. 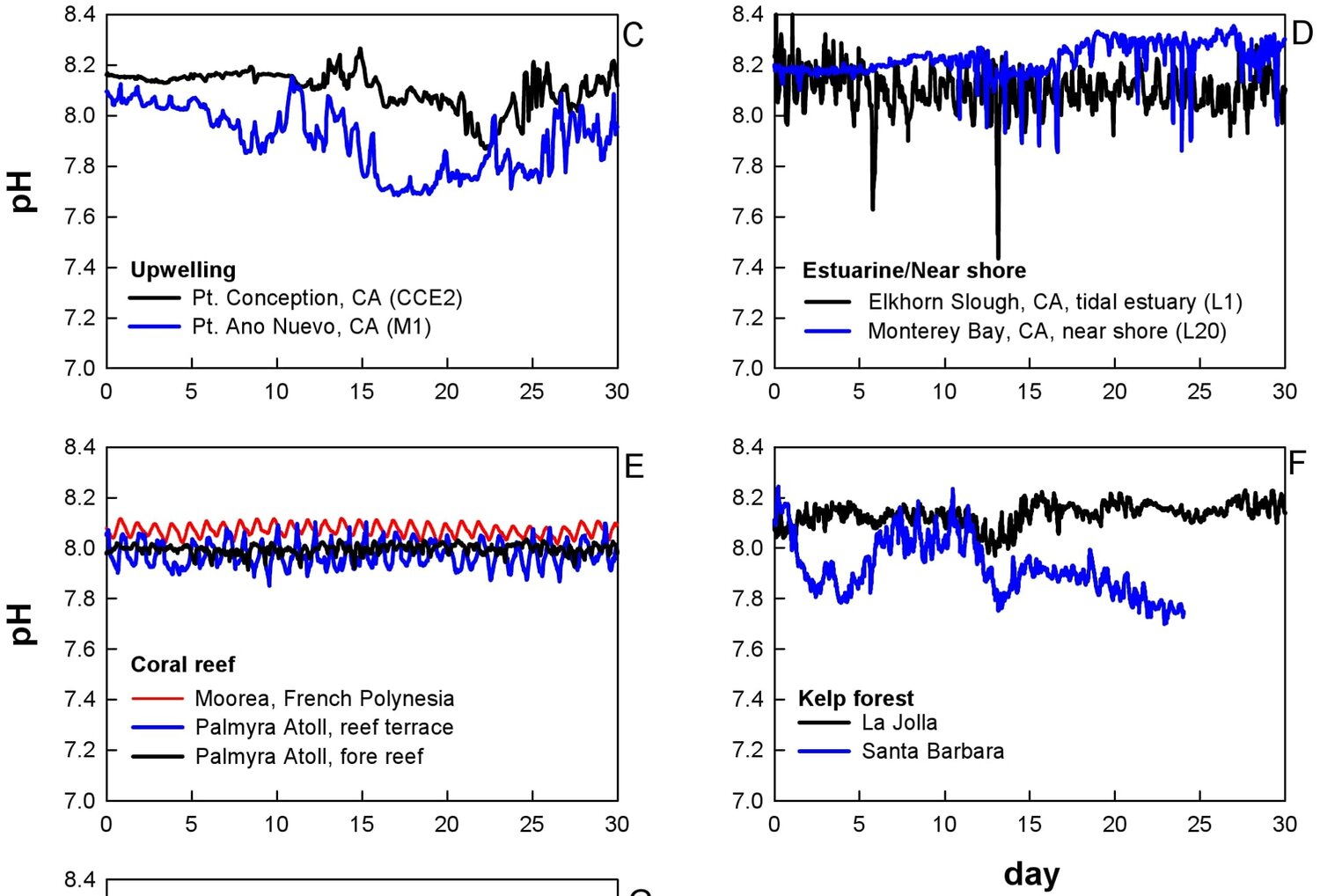 In the Santa Barbara kelp forest (F in the figure), for example, the pH fluctuates by 0.5 units, a change in acidity of more than 200%, over 13 days; the mean variation in the Elkhorn Slough estuary (D) is a full pH unit, or a staggering 900% change in acidity, per day. Likewise, coral reefs (E) can withstand relatively large fluctuations in acidity: the pH of seawater in the open ocean can vary by 0.1 to 0.2 units daily, and by as much as 0.5 units seasonally, from summer to winter. 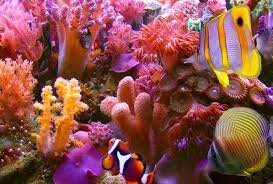 A 2011 study of coral formation in Papua New Guinea at underwater volcanic vents that exude CO2 found that coral reef formation ceased at pH values less than 7.7, which is 0.5 units below the pre-industrial ocean surface average of 8.2 units and 216% more acidic. However, at the present rate of pH decline, that point won’t be reached for at least another 130 to 200 years. In any case, there’s empirical evidence that existing corals are hardy enough to survive even lower pH values.

Australia’s Great Barrier Reef periodically endures surges of pronouncedly acid rainwater at the low pH of about 5.6 that pours onto the Reef from flooding of the Brisbane River, which has occurred 11 times since 1840. But the delicate corals have withstood the onslaught each time. And there have been several epochs in the distant past when the CO2 level in the atmosphere was much higher than now, yet marine species that calcify were able to persist for millions of years.

Nonetheless, advocates of the climate change narrative insist that marine animals and plants are headed for extinction if the CO2 level continues to rise, supposedly because of reduced fertility and growth rates. However, there’s a paucity of research conducted under realistic conditions that accurately simulates the actual environment of marine organisms. Acidification studies often fail to provide the organisms with a period of acclimation to lowered seawater pH, as they would experience in their natural surroundings, and ignore the chemical buffering effect of neighboring organisms on acidification.

Ocean acidification, often regarded as the evil twin of global warming, is far less of a threat to marine life than overfishing and pollution. In Shakespeare’s immortal words, the uproar over acidification is much ado about nothing.

Next: No Evidence That Marine Heat Waves Are Unusual