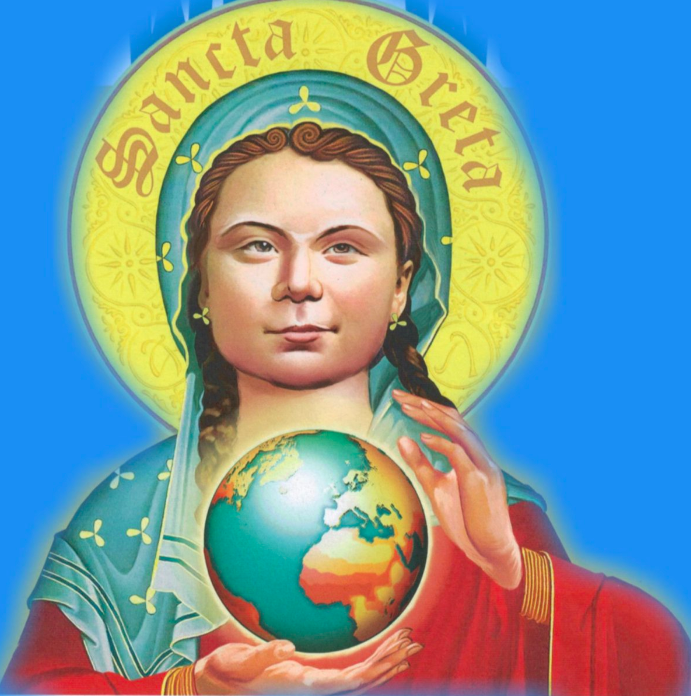 Greta Thunberg, the teenager from Stockholm, is the prophet of a new religion sweeping the West. Call it Climatism. Like any religion worthy of the name, it comes with its own catechism (what to believe) and eschatology (how the world will end). Thunberg’s bible is the latest report of the Intergovernmental Panel on Climate Change (IPCC), which gives us 12 years to save civilization as we know it.

We have prayed to the false gods of fossil-fired growth, runs Thunberg’s indictment. Guilty are the adults who have “lied to us” and given us “false hope.” But her children’s crusade—no-school “Fridays for Future”—will show the path to redemption.

And so, the youngsters did. For September 20, the 16-year-old had managed to organize worldwide protest marches. From New York to Nairobi, from Asia to Australia, tens of thousands thronged the squares and streets of their cities, chanting: “You had a future, and so should we!” 2019 is the year 1 a.g., Anno Gretae.

Of course, Greta Thunberg did not come out of nowhere. All new religions emerge from competing sects, as Jesus did in Jerusalem and Muhammad in the Arabian Hejaz. Why did she succeed so quickly, virtually in a space of months? An “innocent child,” muses Gerard Baker in the Wall Street Journal, “is an inspiring story that is very effective in offering role models and propagating the faith.” A guileless demeanor trumps reams of data and multiple regressions churned out by the IPCC. But it also helps that Greta has a flawless PR machine running in the background at all times.

Environmentalism is not a new thing under the sun. It has a long tradition going back to the American Sierra Club, founded in 1892 for purposes both secular and wholesome. Among the club’s feats are wondrous national parks such as Yosemite and Yellowstone. But I first noticed the creedal nature of the movement 12 years ago in California. In Napa Valley, the Gaia Hotel had ditched the Gideon Bible in favor of Al Gore’s An Inconvenient Truth.1

Eclipsed by Thunberg, Gore is nonetheless still in the prophecy business. Writing in the New York Times last September, he doubled down on doom. “More destructive Category 5 hurricanes are developing,” he wrote. “Monster fires ignite and burn on every continent but Antarctica, ice is melting in large amounts there and in Greenland, and accelerating sea-level rise now threatens low-lying cities and island nations.”

For the believers, the debate is closed, and exhortation has segued into excommunication. No more catty humor, like that on display in the unforgettable bumper sticker from the 1970s: “Save the Planet! Kill yourself!” Those who reject the faith are “climate-change deniers,” as in “denying the Father and the Son” (1 John 2:23). Relate Climatism to Judeo-Christianity, and the psycho-structural analogies abound.

First, you need a prophet like Isaiah who rains damnation on the wayward. “Woe to a people whose guilt is great, a brood of evildoers! They have forsaken the Lord and turned their back on him” (Isaiah 1:4). Greta, and Gore before her, replicates the language of the Good Book. Today, penitence demands renouncing the obscene material pleasures that doom our planet with megatons of noxious gases.

Second, invoke the apocalypse, as in the Revelation of St. John (Revelation 13:13), where God will “make fire come down from the heavens.” Religion, pagan or monotheist, is shot through with cosmic angst attacks. The Deluge goes back to the Mesopotamian Gilgamesh epic (1800 b.c.e.). Sodom and Gomorrah are incinerated for their debaucheries. Egypt is punished with the Ten Plagues to force Pharaoh to “let my children go.” Hardly had they fled when God wanted to slay them all for praying to the Golden Calf. In a brilliant plea, Israel’s greatest prophet, Moses, manages to stave off extinction. God reduced the death sentence to 40 years of wandering in the wilderness.

Today, the harbingers of doom are armed with assumptions, models, and data. Melting ice will raise sea levels, swallowing coasts and islands. What the floods spare will be devastated by droughts or hurricanes. The most recent sign from up high is the darkened skies over the Amazon’s rain forests, the “lungs of the world,” which presages collective death by asphyxiation. For the first iteration of this threat, one need only go back to Revelation 6:13: “The sun became black, and the whole moon became as blood.”

Whereas Isaiah 3:14 thunders, “You have devoured the vineyard, and the spoils of the poor is in your houses,” today’s climate prophets target the exploitation of the Third World by the rich West. Hence, “the Lord will take away their finery, the anklets and headbands” (Isaiah 3:18). And “before me every knee will bow” (Isaiah 45:23).

Third, if you “repent and believe” (Mark 1:15), Armageddon will yield to hope and salvation. But deliverance demands sacrifice, an idea going back to the earliest days of humanity. You could once expiate your sins by burying your baubles. Today, you must trade cars for bicycles. Stop gorging on meat whose production destroys forests and poisons the atmosphere with methane. Shrink your carbon footprint by using trains instead of planes. Ditch plastic in favor of hand-knitted shopping bags. Turn down the thermostat and pay a price for CO2 emissions. Such a levy makes economic sense by putting a market price on profligacy, but one can’t help recalling the indulgences condemned by another prophet, Martin Luther, in the 16th century.

Of course, faith has nothing to do with earth science. The latest IPCC Report (2018), authored by luminaries in the field, looks like the very model of scientific inquiry. It is 618 pages long and packed with graphs, math, and time series. Given the dense academic language, it is doubtful whether anybody apart from the proofreaders has read the tome in its entirety.

Nor is it necessary to run the whole course in order to get at a basic truth—a truth regularly ignored by the media, with its penchant for turning “might be” into “is” and “could happen” into “will happen.” For our purpose, it is enough to read the 24 pages of the “Summary for Policy Makers.” It is preceded by a motto taken from the beloved French children’s book author Antoine de St. Exupéry that gives the game away: The report is about salvation but written in the language of science. The quote reads: “As for the future, the task is not to foresee, but to enable it.”

The data-driven language of the climatologists is more timid than the thunder of the Prophets. Isaiah, Jeremiah et al. mince no words when they let loose death and damnation. Unless you repent, God will strike. You will suffer hellish retribution. You will perish. The authors of the IPCC “Summary” hedge their bets. “Human activities are estimated to have caused approximately 1.0°C of global warming” (emphasis added). “It is likely to reach 1.5°C between 2030 and 2052 if it continues to increase” (emphasis in original).

Anthropogenic global warming is again “estimated” as such and such. Extreme weather is explained by “attribution studies,” which suggests that the authors are not sure about whether one variable drives another, but they offer probabilistic assessments. Anthropogenic emissions “alone are unlikely to cause global warming of 1.5°C” (emphasis in original). (Note that the media are comfortable bandying around the figure of 2 or even 4 degrees.) Risks are not certain, avers the report, but depend on all kinds of factors, such as the “rate of warming, geographic location, levels of development and vulnerability.” So if X goes up, as assumed, then Y and Z might follow.