Morano and Suzuki at UN climate summit in Madrid on December 10, 2019

MADRID, Spain — Climate Depot Note: Climate skeptics are not being well received here at the UN summit in Madrid. Famed Canadian Environmentalist David Suzuki — who had just declared that “Capitalism is at the heart of what is driving” climate and “we’ve got to throw the system out” — refused a copy of my new Climate Talking Points report. Suzuki instead shouted at me on  December 10: “You are an evil person.”

I responded: An evil person?

Suzuki: “Yes, you are. You are an evil person.”

Suzuki later added, “You are a badass person. And I am sure you are proud of that.”

Journalist Licia Corbella: David Suzuki told me to ‘F-off’, but his hypocrisy gives the finger to his message – ‘Suzuki is fond of flying all over the planet to deliver his $30,000 to $50,000 speeches, while hypocritically imploring others to stay close to home.’ 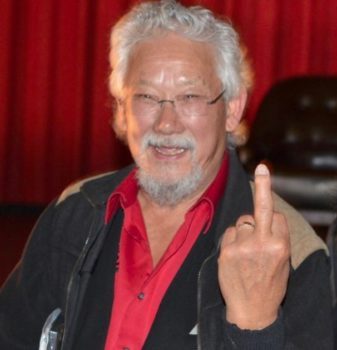 Kenney, “I would like to know if the government would join with the official Opposition and a growing number of Albertans in expressing concern about the honour being granted to Dr. David Suzuki, who says that human beings are an invasive species, that immigration is disgusting and crazy and should be stopped, who says that the oilsands are the moral equivalent of slavery, who says that economics is the product of brain damage, and who says that Alberta’s major employer should be shut down immediately. “Does the government share my concern about the honorary doctorate being granted to such an individual?” asked Kenney.

Warmist David Suzuki: ‘Enemy of Free Speech’ – ‘Has called for the imprisonment of those who disagree’

‘For eight years, eco leader has called for the imprisonment of those who disagree. Why is he still welcome in polite society?’

Green Activist David Suzuki: Climate Skeptics ‘should be thrown in jail’ – Suzuki: ‘I really believe that people like the former Prime Minister of Canada should be thrown in jail for willful blindness. If you’re the CEO of a company and you deliberately avoid or ignore information relevant to the functioning of that company, you can be thrown in jail… And to have a Prime Minister who for nine years wouldn’t even let the term ‘climate change’ pass his lips! If that isn’t willful blindness, then I don’t know what is.’

Green Activist David Suzuki: Jail Politicians Who Deny Global Warming; But PBS Host Bill Moyers Worries There’s Lack of Prison Space – Suzuki: ‘Our politicians should be thrown in the slammer for willful blindness. If we are in a position of being able to act, and we see something going on and we refuse to acknowledge the threat or act on it, we can be taken to court for willful blindness. I think that we are being willfully blind to the consequences for our children and grandchildren. It’s an intergenerational crime.’

Moyers didn’t see the sheer radicalism of Suzuki’s plan as a problem. He saw a different problem, and he explained it to his audience: ‘The problem is, if that should happen, if politicians were to be convicted of willful blindness to the fate of the Earth and future generations, there would have to be mass arrests and lots more funding for new prisons. We’re not talking about a mere handful of culprits. It’s hard even to know where to start.’

BURN IN HELL: NYT Warmist Paul Krugman to those whose ‘deny’ global warming: ‘May you be punished in the afterlife for doing so’ — Calls ‘denial’ an ‘almost inconceivable sin’

Krugman invokes God’s wrath on skeptics: ‘You can deny global warming (and may you be punished in the afterlife for doing so — this kind of denial for petty personal or political reasons is an almost inconceivable sin).’ 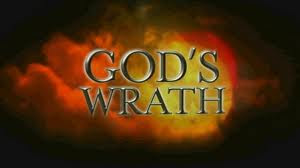 A Northwestern University bioethicist who has called climate change the “core moral issue of our time” said she believes ignoring the phenomenon is akin to sin.

Climate Depot’s Exclusive Round up of Religion climate claims