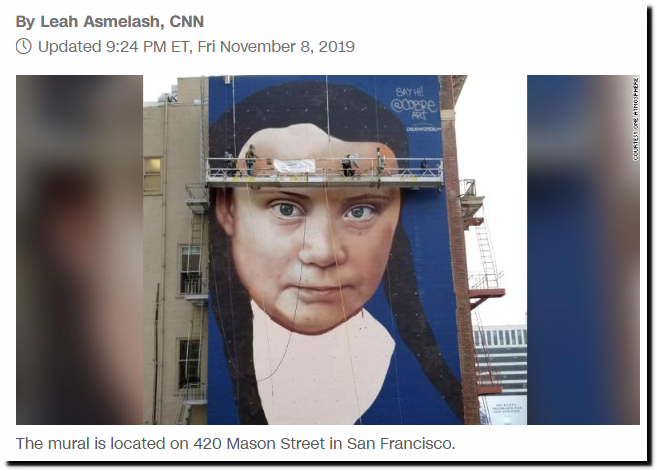 “Fossil fuels are literally choking the life from us,” Thunberg continued. “That action must be powerful and wide-ranging. After all, the climate crisis is not just about the environment. It is a crisis of human rights, of justice, and of political will. Colonial, racist, and patriarchal systems of oppression have created and fueled it. We need to dismantle them all. Our political leaders can no longer shirk their responsibilities.”

Flashback: Greta advisor & Extinction Rebellion’s George Monbiot declared: ‘We’ve got to go straight to the heart of capitalism and overthrow it’

Far-left climate extremist Greta Thunberg unloaded on the world in an op-ed published on Friday, claiming that fossil fuels “are literally” killing mankind, and that they are a threat to “our very existence” as she said that her “climate crisis” agenda is not just about the environment, but about fighting the “colonial, racist, and patriarchal systems of oppression.”

In an op-ed published in Project Syndicate, Thunberg and two other far-left climate activists attacked world leaders over their pro-capitalist policies, writing that “the politicians let the profiteers continue to exploit our planet’s resources and destroy its ecosystems in a quest for quick cash that threatens our very existence.”

Although she did not explicitly say it, Thunberg admitted that the Paris Climate Accord – which would have cost the United States trillions of dollars and hundreds of thousands of jobs – has been an abject failure.

Thunberg wrote: “…recent research shows that we are on track to produce 120% more fossil fuels in 2030 than would be consistent with the 1.5°C limit. The concentration of climate-heating greenhouse gases in our atmosphere has reached a record high, with no sign of a slowdown. Even if countries fulfill their current emissions-reduction pledges, we are headed for a 3.2°C increase.”

In 2015, the Paris climate accord gave every country in the world the ability to set its own goals to combat the climate crisis. World leaders agreed to do their part toward stopping planet temperatures from rising more than 2 degrees Celsius—later updated to 1.5 degrees—above pre-industrial levels.

Even the left-leaning New York Times admitted that the Paris Climate Accord has been a failure, reporting that “even if every country did manage to fulfil its individual pledge, the world would still be on pace to heat up well in excess of 2 degrees Celsius (3.6 degrees Fahrenheit) over preindustrial levels, the threshold that world leaders vowed to stay ‘well below’ in Paris because they deemed it unacceptably risky.”

Thunberg said that her far-left activism has been about “changing perceptions” and “shifting” “public opinion” on climate change and getting “schoolchildren” to lead “the way in raising awareness.”

“Fossil fuels are literally choking the life from us,” Thunberg continued. “That action must be powerful and wide-ranging. After all, the climate crisis is not just about the environment. It is a crisis of human rights, of justice, and of political will. Colonial, racist, and patriarchal systems of oppression have created and fueled it. We need to dismantle them all. Our political leaders can no longer shirk their responsibilities.”

Thunberg said that her goal in her “climate resistance movement” is “to change everything.”

“So we will keep up a steady drumbeat of strikes, protests, and other actions,” Thunberg added. “We will become louder and louder. We will do whatever it takes to persuade our leaders to unite behind science so clear that even children understand it.”

Fellow far-left activist David Hogg made similar extremist remarks on Twitter last week regarding the climate, writing: “In the next couple of years the protests will become so big that cops wont be able to handle it and the national guard/military will have to be called in.”

Thunberg has a well-documented history of preaching climate radicalism on the world stage as she recently ranted at the United Nations in a speech that was praised by the political Left and the media while condemned by many others.

“My message is that we’ll be watching you. This is all wrong, I shouldn’t be up here, I should be back in school on the other side of the ocean,” Thunberg began. “Yet, you all come to us young people for hope. How dare you. You have stolen my dreams and my childhood with your empty words, and yet I’m one of the lucky ones. People are suffering; people are dying. Entire ecosystems are collapsing. We are in the beginning of a mass extinction, and all you can talk about is money and fairytales of eternal economic growth.”