(CNN) The Earth is heading toward a “global tipping point” if the climate crisis continues on its current path, scientists have warned, as they called for urgent action to avoid “an existential threat to civilization.”

The group of researchers, who published a commentary in the journal Nature, say there is growing evidence to suggest that irreversible changes to the Earth’s environmental systems are already taking place, and that we are now in a “state of planetary emergency.” 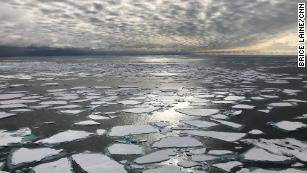 Arctic melt: Threat beneath the ice
A global tipping point is a threshold when the planet’s systems go beyond the point of no return — such as the loss of the Amazon rainforest, accelerated melting of ice sheets, and thawing of permafrost — the authors of the commentary say.
Such a collapse could lead to “hothouse” conditions that would make some areas on Earth uninhabitable.
“We argue that the intervention time left to prevent tipping could already have shrunk towards zero, whereas the reaction time to achieve net zero emissions is 30 years at best,” the authors said.

Led by Timothy Lenton, professor of climate change and Earth system science at the University of Exeter, in southwest England, the team identified nine areas where they say tipping points are already underway.