And I can’t help it, this is a little bit symbolic. Here you have the library of Ronaldus Magnus in the communist state of California. I can’t help but think that some in the media are rooting for the fire, maybe the first time ever that a fire has had fans. I mean supporters.

But I wouldn’t be a bit surprised if a bunch of leftists say, “Burn, baby, burn! Get rid of Reagan forever. We can put up a new solar plant.” Did you see where Gavin Newsom, the governor of California, has publicly announced that the Getty Fire… By the way, do you know how they name fires? Well, it’s not all that complicated, but the names of fires are so odd that I had to look into it. You know, like the Lockerbie Fire, but there’s no Lockerbie, or whatever the names are of the big fires recently in California. They are the location where they think this fire began. 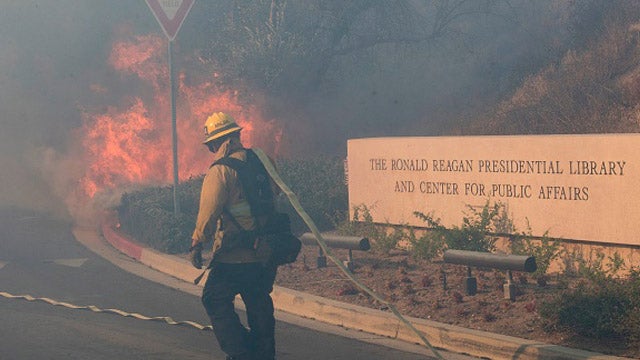 So if it’s a street corner of, you know, Khrushchev Avenue and Castro Street, they’ll call it “the Castro Fire,” and then you say, “Castro Fire? What? What?” (chuckling) Well, we’re talking California. (interruption) Well, I don’t… (sigh) Give them time. They’ll figure out a way to sell naming rights to the fires because they’re gonna become so frequent. Now, let me ask you a question, ’cause I want to share something with you that happened many times to me when I moved to California in 1984.

When I’ve flown over the country or when I’ve driven around it, I have seen massive power lines that have been run up and down forest hillsides, and next to the power poles — the towers, the structures — they clear-cut the forest in a very wide swath (like 10, 15 yards) on both sides of the tower on which the electricity wires are strung. I looked at that and said, “This is ugly,” you know, before I knew what was going on. “This is ugly. How in the hell can anybody…?” Now I know why.

They clear-cut the forest so in case a downed power line falls, it’ll fall on nothing that could turn into a fire, nothing that could catch fire. Well, this is what California has not permitted to happen. The environmentalist wackos are the reason for the fire, not PG&E, and not anybody else. The environmentalist wackos have prevented the clear cutting of any wood — deadwood, waste wood. They won’t permit it on the basis that it’s au natural. “It’s the way it was intended by nature. There could be unknown, unnamed species living in that deadwood!

“You can’t touch it.” So in California, you can’t touch it. So Gavin Newsom says that a downed power line started the Getty Fire. A tree branch from a eucalyptus tree fell on a power wire, and that caused the wire to go down. He called it “an act of God” in one of the most recent, rare expressions of the existence of God by a California government official. God? You know, God exists in California when you can blame Him! Uh, Her, It, They. (I’m trying to be woke.)