Meteorologist Paul Dorian:  "Perhaps the most amazing temperature recorded in this unusual cold spell for the western US took place earlier today in the remote observing station of Peter Sinks, Utah...the unofficial overnight low temperature there of -43.6 ºF is pretty amazing for this time of year and perhaps the lowest temperature ever recorded in the Lower 48 during the month of October. Nearby Salt Lake City, Utah provided some supporting evidence of the extreme cold as it set a low temperature record of 14 ºF for the date and records there go all the way back to 1874. 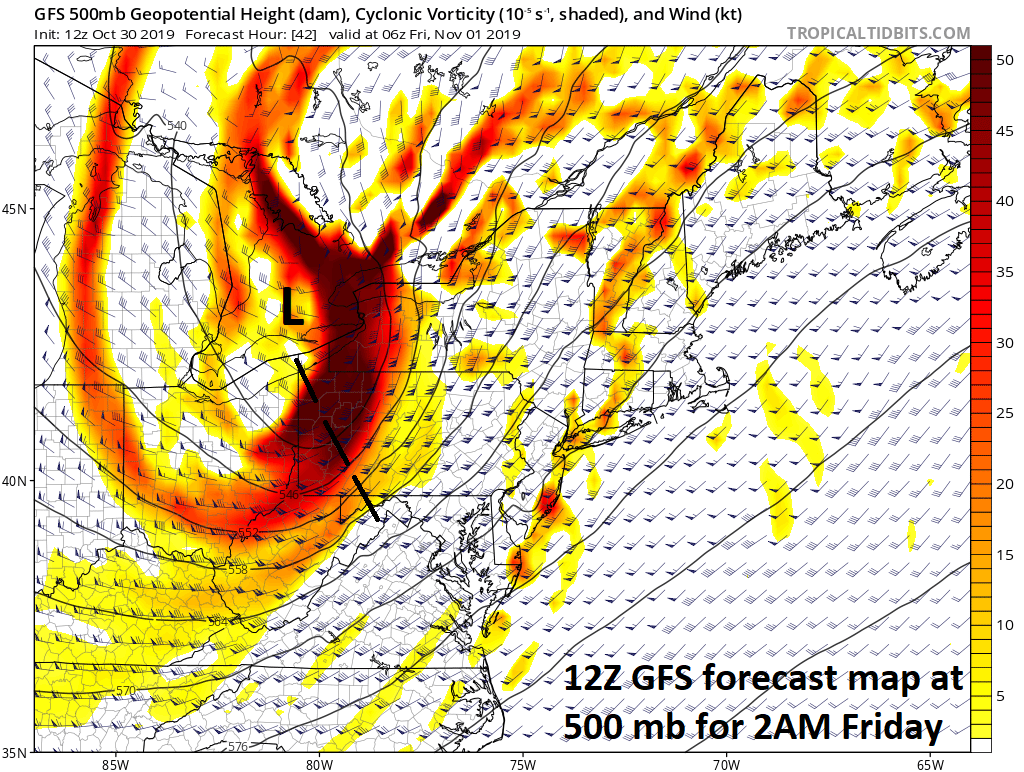 Deep upper-level low over the eastern Great Lakes will take on a “negative-tilted” trough axis leading to the formation of a squall line; courtesy NOAA, tropicaltidbits.com

Every once in awhile there is a frontal passage that is a longer-term pattern changer and tomorrow night, we will experience such a front in the Mid-Atlantic region and NE US.  October has been generally warmer-than-normal in the eastern US with Philly, for example, at +3.2 ºF for the month so far and Washington’s Reagan National Airport at +4.4 ºF.  The strong cold front that will pass through the region tomorrow night with downpours, strong-to-severe thunderstorms, and howling winds gusting up to 50 mph will usher in much cooler air for Friday and Saturday and then a secondary front on Sunday will usher in the coldest air of the season so far.  A widespread freeze is likely on Sunday night for the first time this season in the Mid-Atlantic/NE US and a colder-than-normal pattern is likely to continue for much of the month of November. 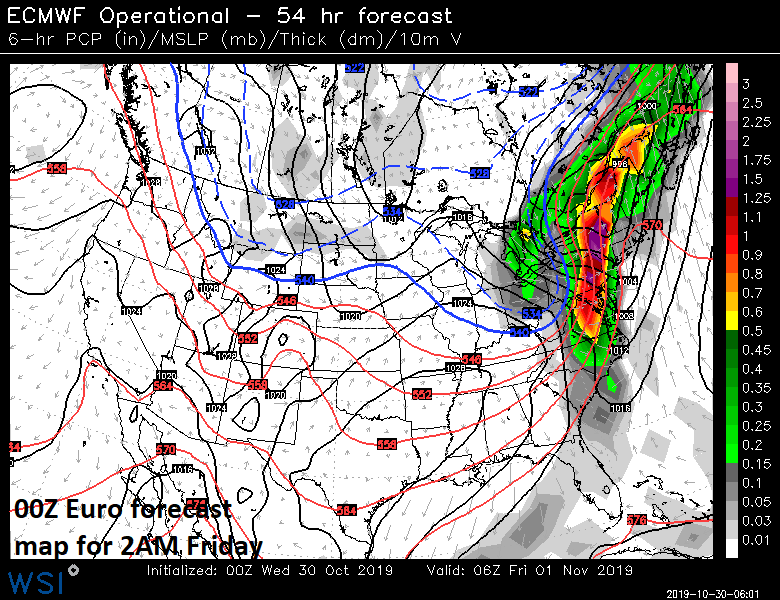 On Thursday, a deep trough of low pressure will move into the Great Lakes region and take on a “negatively-tilted” trough axis (i.e., oriented from NW-to-SE) and this will promote strong lifting action in the Mid-Atlantic/NE US.  Low pressure will develop over the SE US and strengthen as it tracks toward upstate New York and southern Ontario by the overnight hours.  A warm front will be nearby in the morning hours likely resulting in occasional rain; especially, to the NW of Route I-95.

By afternoon and early evening, the surface low will begin to accelerate to the northeast and underneath a strong upper-level jet streak and this will put the I-95 corridor region in the warm sector.  Rain could actually taper off for awhile in the late afternoon and early evening (4-8pm) while in a “dry slot” – good news for “trick-or-treaters” – and temperatures will likely soar into the 70’s.  The winds will also pick up noticeably during the PM hours from a south-to-southwest direction. 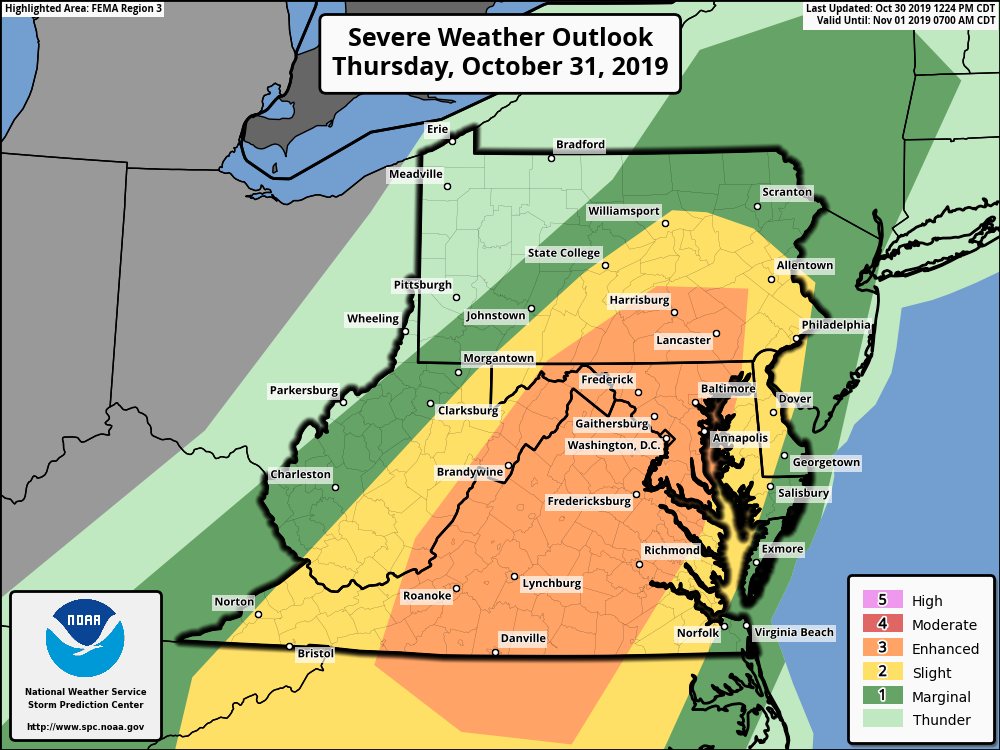 The “main event” with this system will come tomorrow night probably between the hours of 8PM and 2AM.  A squall line is likely to form well to the west of Route I-95 late tomorrow afternoon extending in a north-to-south fashion from central NY-to-central PA-to-western Virginia.  This squall line is likely to arrive in the I-95 corridor between the hours of 8PM to 2AM with downpours, strong-to-severe thunderstorms, and wind gusts to 50 mph or so.  Power outages are on the table as many leaves remain on trees which makes them more vulnerable than say a month from now.  Behind the front, winds will turn to a west-to-northwest direction and can gust past 40 mph towards Friday daybreak. In terms of total rainfall, there will be a tendency for lesser amounts as one goes from west-to-east with central and NE PA, for example, likely to receive 1.5 – 2.0 inches, around an inch in the immediate I-95 corridor, and about half an inch at the NJ/Delmarva coastlines.

Temperatures so far this season have not dropped to the freezing mark in many parts of the I-95 corridor, but that is likely to change after this frontal passage.  While there is a decent chance for some near freezing temperatures late Friday night and late Saturday night, an even better chance is likely to come late Sunday night.  In fact, with the coldest air of the season arriving on Sunday, the stage will be set for the first widespread freeze late Sunday night/early Monday as signs point to excellent conditions for radiational cooling (i.e., clear skies, diminishing winds) with high pressure moving directly overhead.

This 24-hour temperature plot from an observing station at Peter Sinks, Utah shows overnight lows bottoming out around 43 degrees below zero – which may be the lowest temperature ever recorded in the Lower 48 during the month of October.

Western/central US cold and accumulating snow

Record-breaking cold invaded the western US early in the week and has since spread into the central part of the nation.  Many spots in the western and central US have experienced daily record low temperatures over the past few days and, in some cases, the all-time low temperature for October was recorded (e.g., Merced, CA, Garden City, KS, San Luis Obispo, CA, Rock Springs, WY, Jackson Hole, WY and Vernal, UT).

Perhaps the most amazing temperature recorded in this unusual cold spell for the western US took place earlier today in the remote observing station of Peter Sinks, Utah.  Peter Sinks is a natural sinkhole in the northern part of Utah at an elevation of around 8000 feet and is known for its highly localized effects.  Nonetheless, the unofficial overnight low temperature there of -43.6 ºF is pretty amazing for this time of year and perhaps the lowest temperature ever recorded in the Lower 48 during the month of October.  Nearby Salt Lake City, Utah provided some supporting evidence of the extreme cold as it set a low temperature record of 14 ºF for the date and records there go all the way back to 1874.

Accumulating snow has accompanied the extreme cold in the western and central states with in such hard-hit areas as the Rocky Mountain States and central/northern Plains.  Denver, Colorado has now been hit by two snowstorms this month and is on pace for one of the snowiest Octobers there in around 50 years. The low temperature in Denver this morning was 3 ºF which came within five degrees of the all-time October low of -2 ºF set in 1917. Temperatures tomorrow morning could come even closer to the all-time October low with lows near zero quite likely. 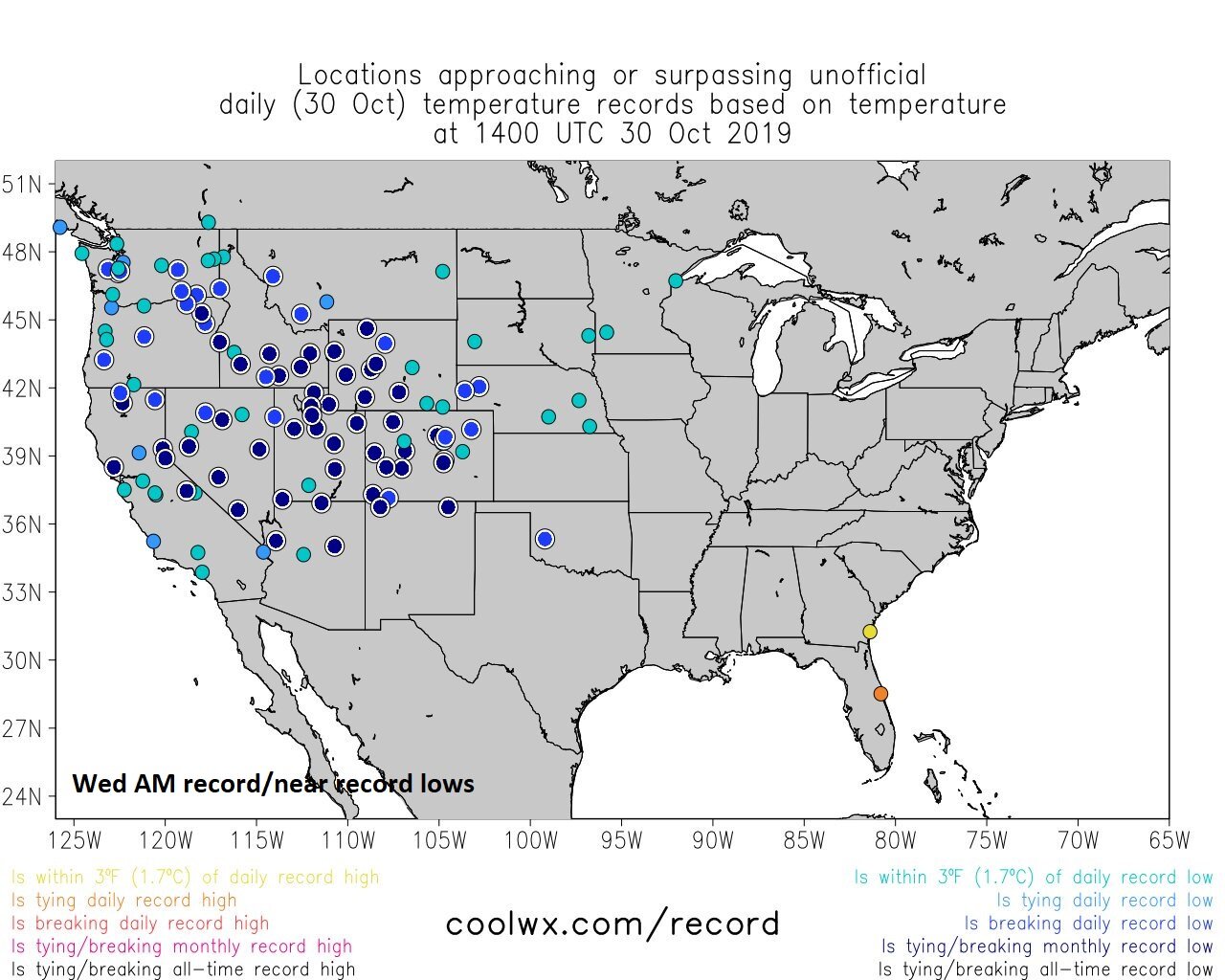 Record or near record lows have been prevalent during the past few days across the western and central US with several sites recording their lowest temperatures ever for October (black circles); courtesy NOAA, coolwx.com

One final note, this is the weekend in which we turn the clocks back an hour which will certainly make it easier getting up in the morning.