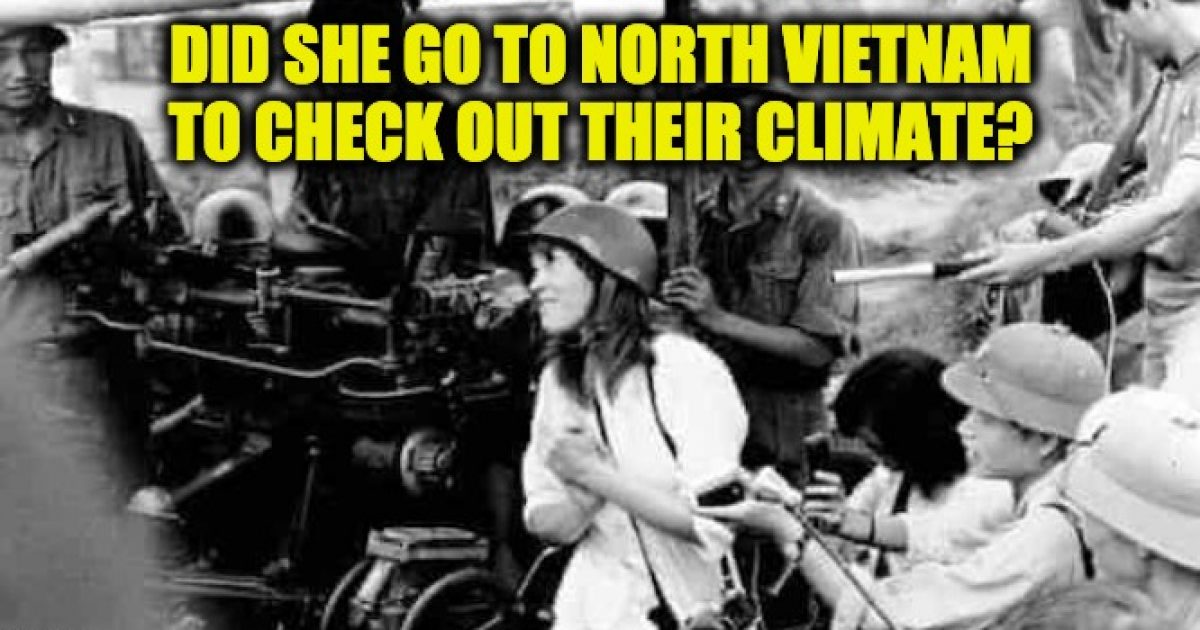 When she went to North Vietnam and sat on one of their anti-aircraft guns while Americans were dying in the Vietnam war, was it just a climate investigation?  Because Jane Fonda says she has been a “climate scientist for decades and decades.”

Fonda was interviewed by ABC News on Thursday, the day before she was arrested with sixteen other protesters on Friday after being repeatedly warned by police to leave the steps of the U.S. Capitol. Hanoi Jane was charged with “crowding, obstructing or incommoding.” and was released hours later.

The interview appeared on ABC shortly after her arrest (smells like a setup). She even told the interviewer her plan to go to the Capitol  “11 o’clock every Friday morning: and invited people to “come get arrested with me or choose not to it doesn’t matter.”

“I’m going to be here through Thanksgiving, and Christmas, sleet, rain, whatever it is.”

Moving to DC? Doesn’t the city have enough problems?  Congress must be relieved that they get out of Washington DC for Thanksgiving and Christmas.

“They’re saying, ‘Come on, you know, you’re taking our future away from us. We need — we need you to support us.’ And so grandmas unite,” she said. “I want to stand with them and raise up… their message. This is — this is serious… This is a crisis unlike anything that has ever faced humankind.”

“I think every single human being has to say, ‘What can I do to put this at the forefront?’” she said. “(With) everything that’s going on in the news, well, we have to fight our way through that and find ways to get climate change in people’s minds.”

The esteemed actress pushed back against criticism that Hollywood’s presence could make climate change a more polarizing issue.

“What we’re facing is so important and so urgent, it doesn’t matter. Those — those things don’t even matter,” she told Parks. “This is the future. This is whether we’re going to survive.”

When asked if there was a “turning point” for her, Fonda responded, “I’ve been a climate scientist for decades and decades,” before she claimed she was motivated by the recent protests in Sweden by Greta Thunberg.

Saying she’s been inspired by Greta Thunberg, Jane Fonda tells @ABC she’s going to hold a weekly protest in DC on climate change: “I’m moving here. I’m going to be here through Thanksgiving, and Christmas, sleep, rain, whatever it is.”

4,785 people are talking about this

For years this site has debunked the study claiming that 97% of climate scientists agree with the climate change hypothesis. But now I understand how they got to that fake number.  John Cook, who created the study, must have asked people like Jane Fonda, who self-Identifies as a climate scientist but didn’t study science.