Physicist on Sea Ice: ‘There’s certainly no cause for alarm’

Most of us know about the loss of sea ice in the Arctic due to global warming. The dramatic reduction in summer ice cover, which has continued for almost 40 years, is frequently hyped by the mainstream media and climate activists as an example of what we’re supposedly doing to the planet.

But the loss is nowhere near as much as predicted, and in fact was no more in the summer of 2019 than in 2007. Also, it’s little known that Arctic sea ice has melted before during the record heat of the 1930s. And the sea ice around Antarctica, at the other end of the globe, has been expanding since at least 1979.

Actual scientific observations of sea ice in the Arctic and Antarctic have only been possible since satellite measurements began in 1979. The figure below shows satellite-derived images of Arctic sea ice extent in the summer of 1979 (left image), and the summer (September) and winter (March) of 2018 (right image). Sea ice expands to its maximum extent during the winter and shrinks during summer months. 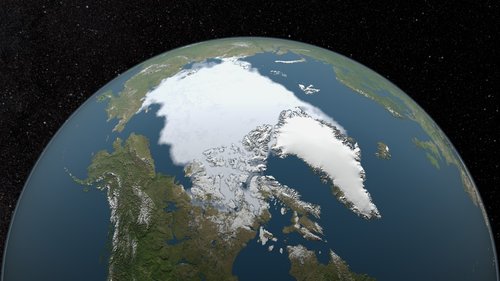 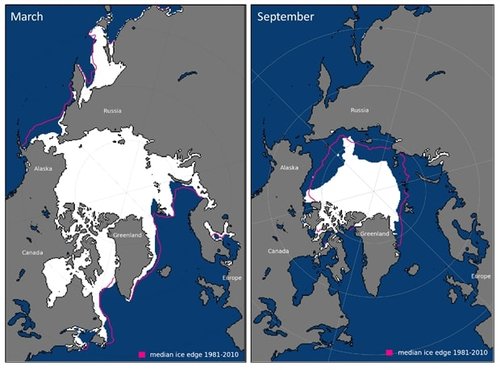 Arctic summer ice extent decreased by approximately 33% over the interval from 1979 to 2018; while it still encases northern Greenland, it no longer reaches the Russian coast.

However, there has been no net ice loss since 2007, with the year-to-year minimum extents fluctuating around a plateau. An exception was 2012, when a powerful August storm known as the Great Arctic Cyclone tore off a large chunk of ice from the main sea ice pack. Clearly, the evidence refutes numerous prognostications by advocates of catastrophic human-caused warming that Arctic ice would be completely gone by 2016.

Before 1979, the only data available on Arctic sea ice are scattered observations from sources such as ship reports, aircraft reconnaissance and drifting buoys – observations recorded and synthesized by the Danish Meteorological Institute and the Russian Arctic and Antarctic Research Institute. Analyses of this spotty data have resulted in numerous reconstructions of Arctic sea ice extent in the pre-satellite era.

One of the most comprehensive reconstructions is shown in the next figure, depicting  reconstructed Arctic summer ice area, in millions of square kilometers, from 1900 to 2013. The reconstruction was based on the strong correlation of Arctic sea ice extent with Arctic air temperatures during the satellite era, especially in the summer, a correlation assumed to be the same in earlier years as well. This assumption then enabled the researchers to reconstruct the sea ice area before 1979 from observed temperatures in that era. 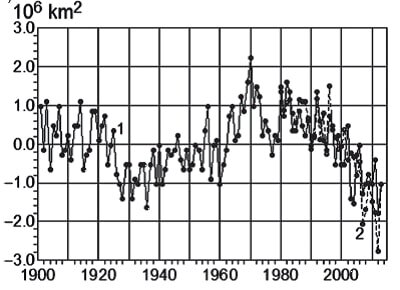 What this graph reveals is that summer ice cover in the Arctic, apart from its present decline since about 1979, contracted previously in the 1920s and 1930s. According to the researchers, the biggest single-year decrease in area, which occurred in 1936, was about 26% – not much less than the 33% drop by 2018. Although this suggests that the relatively low sea ice extents in recent years are comparable to the 1930s, the reconstruction doesn’t incorporate any actual pre-satellite observations. Other reconstructions that do incorporate the earlier data show a smaller difference between the 1930s and today.

It’s the opposite story for sea ice in the Antarctic, which is at its lowest extent during the southern summer in February, as shown in the satellite-derived image below for 2018-19. 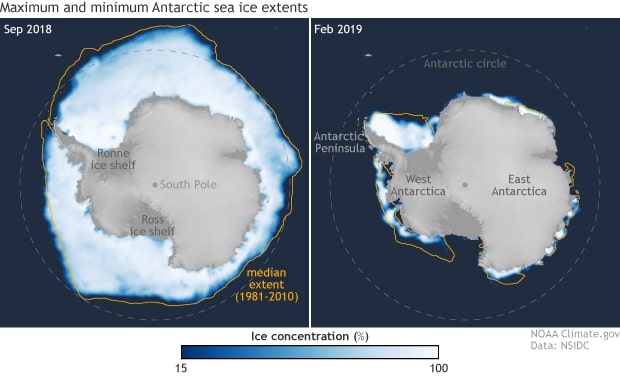 Despite the contraction in the Arctic, the sea ice around Antarctica has been expanding during the satellite era. As can be seen from the following figure, Antarctic sea ice has gained in extent by an average of 1.8% per decade (the dashed line represents the trend), though the ice extent fluctuates greatly from year to year. Antarctic sea ice covers a larger area than Arctic ice but occupies a smaller overall volume, because it’s only about half as thick. 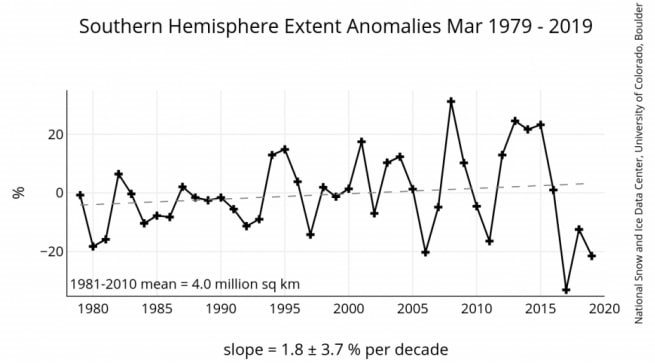 Another fallacious claim about disappearing sea ice in the Arctic, one that has captured the public imagination like no other, is that the polar bear population is diminishing along with the ice. But, while this may yet happen in the future, current evidence shows that the bear population has been stable for the whole period that the ice has been decreasing and may even be growing, according to the native Inuit.

In summary, Arctic sea ice shrank from about 1979 to 2007 because of global warming, but has remained at the same extent on average in the 12 years since then, while Antarctic sea ice has expanded slightly over the whole period. So there’s certainly no cause for alarm.

Next: No Convincing Evidence That Antarctic Ice Sheet is Melting