The next figure depicts the number of strong (EF3 or greater) tornadoes observed in the U.S. each year during the same period from 1954 to 2017. Clearly, the trend is downward instead of upward; the average number of strong tornadoes annually from 1986 to 2017 was 40% less than from 1954 to 1985. Once more, global warming cannot have played a role. The most ferocious tornado outbreak ever recorded, spawning a total of 30 EF4 or EF5 tornadoes, was in 1974. 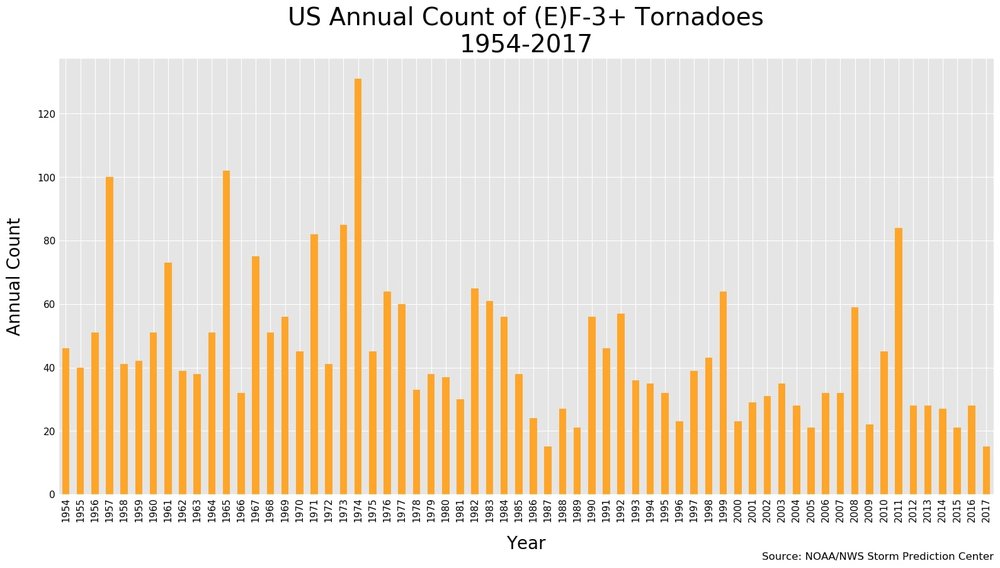 By Physicist Ralph B. Alexander:

Tornadoes are smaller and claim fewer lives than hurricanes. But the roaring twisters can be more terrifying because of their rapid formation and their ability to hurl objects such as cars, structural debris, animals and even people through the air. Nonetheless, the narrative that climate change is producing stronger and more deadly tornadoes is as fallacious as the nonexistent links between climate change and other weather extremes previously examined in this series.

Again, the UN’s IPCC (Intergovernmental Panel on Climate Change), whose assessment reports constitute the bible for the climate science community, has dismissed any connection between global warming and tornadoes. While the agency concedes that escalating temperatures and humidity may create atmospheric instability conducive to tornadoes, it also points out that other factors governing tornado formation, such as wind shear, diminish in a warming climate. In fact, declares the IPCC, the apparent increasing trend in tornadoes simply reflects their reporting by a larger number of people now living in remote areas.

A tornado is a rapidly rotating column of air, usually visible as a funnel cloud, that extends like a dagger from a parent thunderstorm to the ground. Demolishing homes and buildings in its often narrow path, it can travel many kilometers before dissipating. The most violent EF5 tornadoes attain wind speeds up to 480 km per hour (300 mph).

The U.S. endures by far the most tornadoes of any country, mostly in so-called Tornado Alley extending northward from central Texas through the Plains states. The annual incidence of all U.S. tornadoes from 1954 to 2017 is shown in the figure below. It’s obvious that no trend exists over a period that included both cooling and warming spells, with net global warming of approximately 0.7 degrees Celsius (1.3 degrees Fahrenheit) during that time. 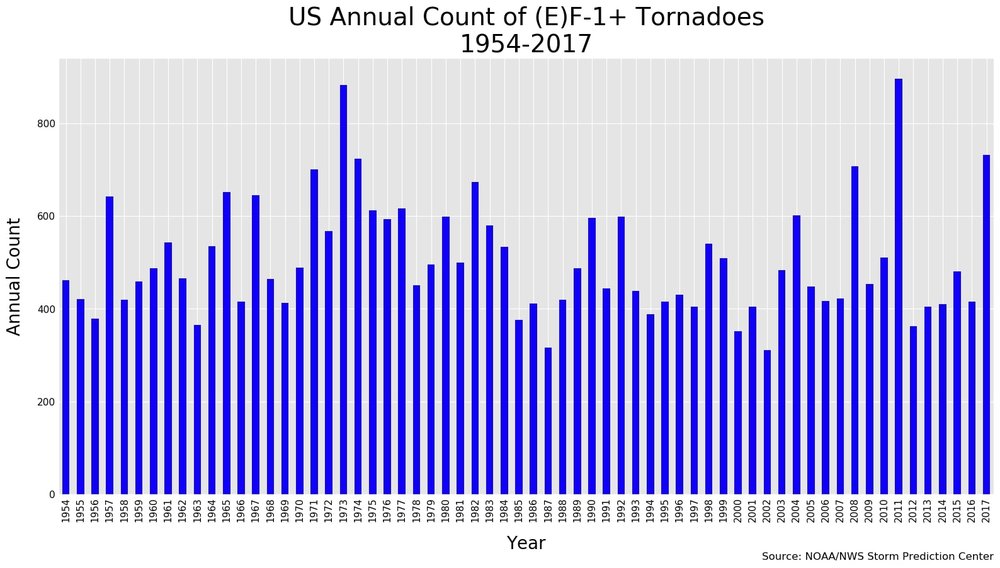 But, as an illustration of how U.S. tornado activity can vary drastically from year to year, 13 successive days of tornado outbreaks in 2019 saw well over 400 tornadoes touch down in May, with June a close second – and this following seven quiet years ending in 2018, which was the quietest in the entire record since 1954. The tornado surge, however, had nothing to do with climate change, but rather an unusually cold winter and spring in the west that, combined with heat from the southeast and late rains, provided the ingredients for severe thunderstorms.

The next figure depicts the number of strong (EF3 or greater) tornadoes observed in the U.S. each year during the same period from 1954 to 2017. Clearly, the trend is downward instead of upward; the average number of strong tornadoes annually from 1986 to 2017 was 40% less than from 1954 to 1985. Once more, global warming cannot have played a role.

In the U.S., tornadoes cause about 80 deaths and more than 1,500 injuries per year. The most deadly episode of all time in a single day was the “tri-State” outbreak in 1925, which killed 747 people and resulted in the most damage from any tornado outbreak in U.S. history. The most ferocious tornado outbreak ever recorded, spawning a total of 30 EF4 or EF5 tornadoes, was in 1974.

Tornadoes also occur more rarely in other parts of the world such as South America and Europe. The earliest known tornado in history occurred in Ireland in 1054. The human toll from tornadoes in Bangladesh actually exceeds that in the U.S., at an estimated 179 deaths per year, partly due to the region’s high population density. It’s population growth and expansion outside urban areas that have caused the cost of property damage from tornadoes to mushroom in the last few decades, especially in the U.S.