Flashback: *The deadly heat wave of July 1936 in the middle of the hottest decade ever for the US*

One of the most widespread and destructive heat waves ever recorded in the US took place in the summer of 1936 which fell right in the middle of the hottest and driest decade ever for the nation. The decade of the 1930’s is renowned for the “Great Depression” and the “Dust Bowl”, both of which caused calamitous human suffering in this country. Not only were huge numbers of crops destroyed by the heat and lack of moisture in the “Dust Bowl” era, but thousands of lives were lost as a result of the heat, drought and economic hardship. Many of the all-time high temperature records that were set in the decade of the 1930’s still stand today. The heat wave experienced in 1936 began in late June, reached a peak in July, and didn’t really come to an end until September. This extreme heat wave was particularly deadly; especially, in high population areas where air conditioning was still in the early stages of development. 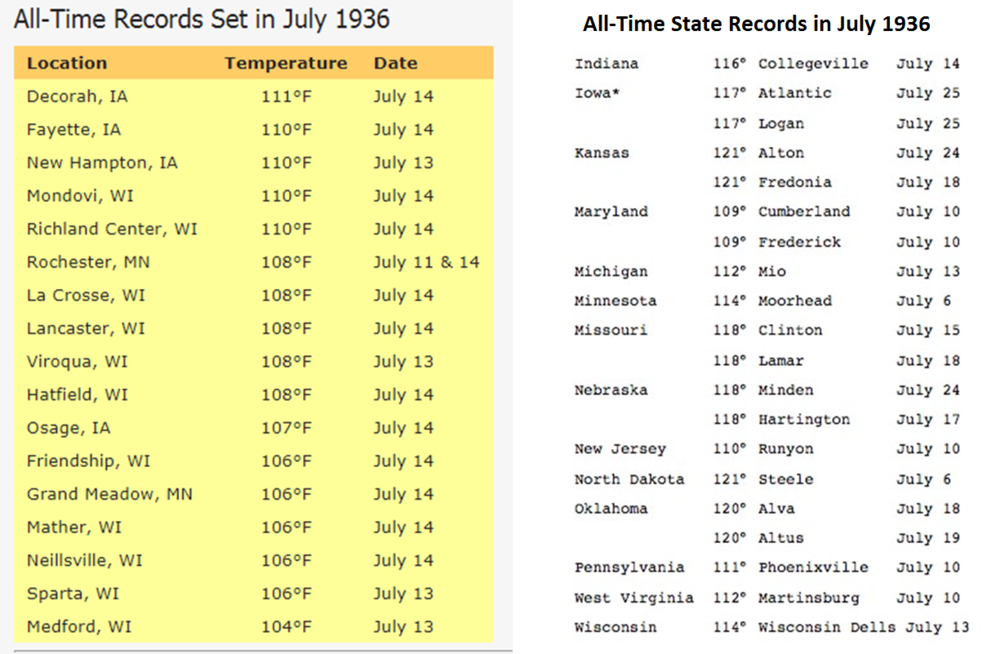 The “Dust Bowl” years of 1930-1936 brought some of the hottest summers ever to the US; especially, across the Plains, Upper Midwest and Great Lakes in arguably the hottest decade ever for the US (source 1, source 2). In addition, there were a series of droughts in this time period which ruined crops all across the Plains where, for example, lush wheat fields became unproductive waste lands. The suffering in the “Dust Bowl” era was brought to life at the end of the decade in the book written by John Steinbeck called The Grapes of Wrath which follows the migration of a poor family of farmers from drought-stricken “Dust Bowl” farmlands to the state of California. The relentless drought across the central Plains during these “Dust Bowl” years contributed in a “positive feedback” fashion to the excessive heat by allowing the sun’s energy to be used almost exclusively in the heating of the ground and lower atmosphere without much energy loss at all in the evaporation of soil moisture.

The worst of the extreme heat in the summer of 1936 took place during the middle part of July. In the week that ended on July 18th, thousands of lives were lost due to the extreme heat and relentless drought conditions across the nation. High temperatures of 100+ degrees (F) were widespread in this time period and numerous cities and states set their all-time high temperature records which still stand today (including in the Mid-Atlantic states of Pennsylvania, New Jersey and Maryland).

Mrs. W.E. Johnson works her shriveled potato patch on the family farm north of Columbia, Mo., in July 1936. Only one-fourth of normal rainfall fell that summer, ruining crops and pastures. The heat wave accompanied a drought that covered much of the Midwest and Plains until scattered rainfall finally broke through on Aug. 28. (St. Louis Post-Dispatch). 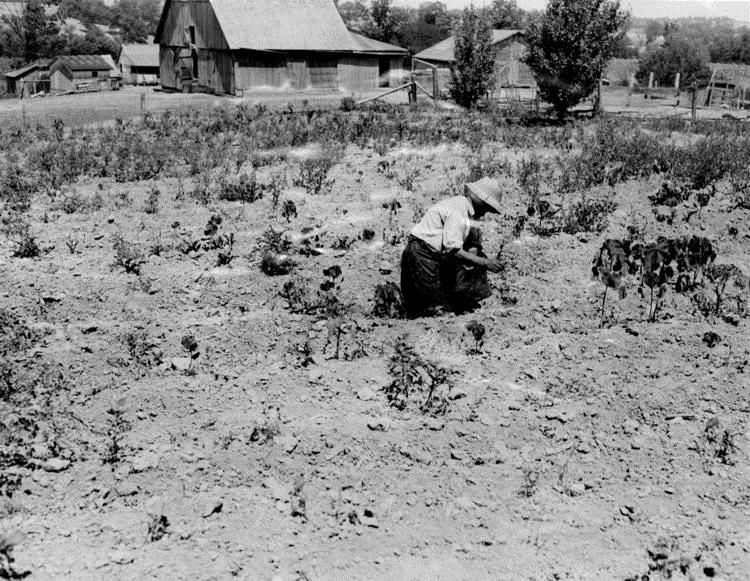 Mrs. W.E. Johnson works her shriveled potato patch on the family farm north of Columbia, Mo., in July 1936. Only one-fourth of normal rainfall fell that summer, ruining crops and pastures. The heat wave accompanied a drought that covered much of the Midwest and Plains until scattered rainfall finally broke through on Aug. 28. (St. Louis Post-Dispatch).

A few examples of the extreme heat that peaked in the Northern Plains and Upper Midwest on July 14th, 1936 included 112°F near Chicago, Illinois, 108°F in Minneapolis, Minnesota, and 110°F in Bismarck, North Dakota. In Minneapolis, the high temperature record set on July 14th still remains today as the highest ever recorded there and the heat caused 51 deaths in St. Paul alone on that particularly deadly day. 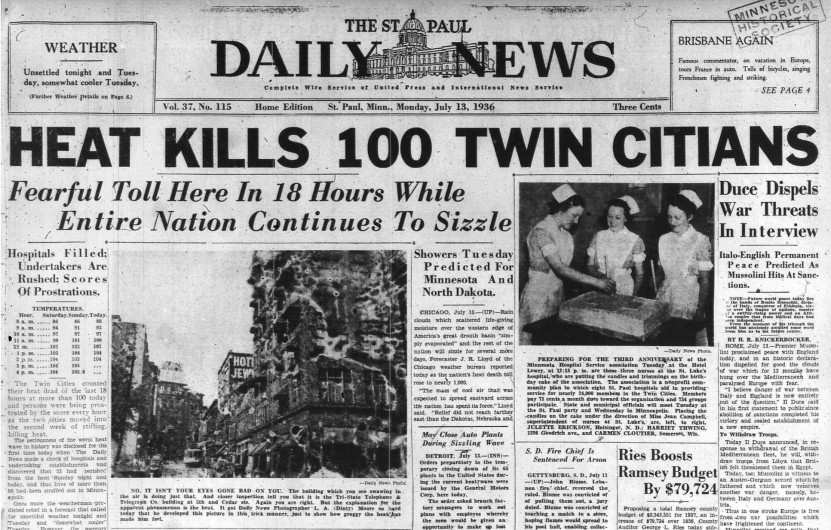 The Mid-Atlantic region wasn’t spared in this widespread extreme heat wave with high temperatures on July 14th of 104°F in Philly and Washington, DC. In fact, the highest temperatures ever recorded in New York City (106°F) and Baltimore, Maryland (107°F) were set on July 10th, 1936. Even as far away as Toronto, Canada, temperatures reached 100°F and the reported death toll there for the heat wave was 225, the biggest spike in the city’s death rate since the 1918 flu pandemic.

Even in the latter stages of July in 1936, there were some absolutely amazing temperature readings as the relentless extreme heat continued in many areas. For example, a minimum temperature of 91°F was reported at Lincoln, Nebraska on the night of July 24-25 and the daily high on the 25th reached 115°F – still an all-time high temperature record. It is worth noting that the “urban heat island” effect did not have the unnatural warming impact on overnight low temperatures experienced in many spots in today’s world. In August of 1936, the extreme heat shifted a bit southward and four southern states set their all-time high temperature records that still stand today (Arkansas: 120°F, Oklahoma: 120°F, Texas: 120°F, and Louisiana: 116°F). (Data Source Wikipedia; wunderground.com) 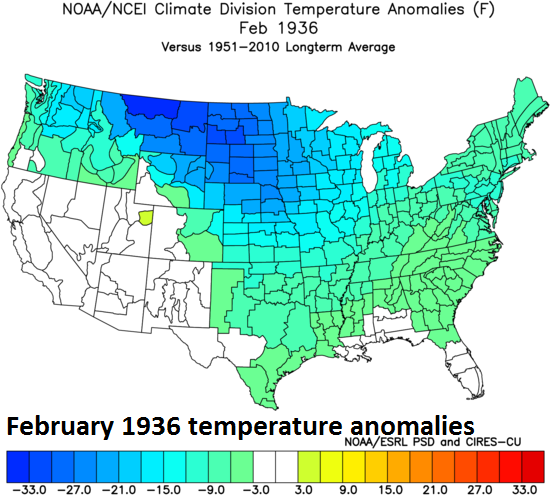 In February of 1936 temperatures fell as low as -60°F in North Dakota, an all-time state record and Turtle Lake, North Dakota averaged -19.4°F for the entire month, the coldest average monthly temperature ever recorded in the US outside of Alaska. One town in North Dakota, Langdon, went for 41 consecutive days below zero (from January 11 to February 20), the longest stretch of below zero (including maximum temperatures) ever endured at any site in the lower 48. Source: wunderground.com