By the early 1990s, the man now dubbed the “chief climate change skeptic” in Donald Trump’s White House had already decided he was uneasy with the science that showed humans were heating the planet.

William Happer, the former Princeton physicist now on Trump’s National Security Council, was then in charge of energy research under George HW Bush.

He asked experts at the Department of Energy to discuss their work with him and was displeased with the attitude he sensed from a climate researcher, according to a story recalled by two of his colleagues.

“They were not just defensive; they just weren’t going to entertain questions,” said Richard Lindzen, an atmospheric physicist from the Massachusetts Institute of Technology and a critic of the scientific consensus on the climate crisis.

Two years later, when Bill Clinton entered office, Happer got into a public disagreement with Al Gore, then the vice-president, over evidence that refrigerant chemicals were eating a hole in the ozone layer. Happer was soon relieved of his government job.

Happer, now 79, remembers standing from his seat in the back of a meeting and telling Gore, ‘What you’ve said is absolutely incorrect,’ according to Caleb Rossiter, who Happer helped recruit to run an organization he founded that questions climate science.

So began Happer’s reputation as a renegade and dissident within a small subculture of academics who think the huge body of research proving a man-made climate crisis is wrong.

Happer’s position veers far to the right of the typical conservative who questions the severity of the climate crisis.

Trump’s former EPA chief Scott Pruitt – previously the administration’s most vocal climate denier – questioned whether humans and their carbon dioxide pollution were the main cause of global warming. But Happer’s ideology goes a step further. He thinks the extra carbon is beneficial to the planet.

And he is in a position to embolden the president’s climate denial as the administration slashes environmental protections and encourages fossil fuel use.

Since he was appointed last autumn as the director of emerging technologies on the White House’s National Security Council, Happer has pushed to challenge the government’s findings that climate change is a national security threat, according to documents first leaked to the Washington Post in February.

No further news has come of that effort, and the National Security Council declined to comment on any possible plans.

But the New York Times has reported Happer censored written testimony from the state department, noting in one draft document that it was “not objective testimony at all” and included “a lot of climate-alarm propaganda.”

“There’s nothing exceptional about the current climate,” a commenter, identified to the Times by two sources as Happer, said.

He’s also sent emails to Nasa administrator Jim Bridenstine criticizing his views that humans are the major cause of warming.

The federal government’s own climate science assessment concludes, “the global warming of the past 50 years is primarily due to human activities, predominantly the burning of fossil fuels.”

Happer was born in India when it was a British colony. His mother was a medical missionary and then worked at Oak Ridge National Laboratory on the Manhattan Project, which Happer credits with his interest in physics.

He received his PhD in physics from Princeton in 1964, teaching at Columbia University before returning to Princeton in 1980. He is credited with innovations to acquire better images of peoples’ lungs and clearer views of the stars. In 1976, he became a member of Jason, an elite group of scientists who advise the government. 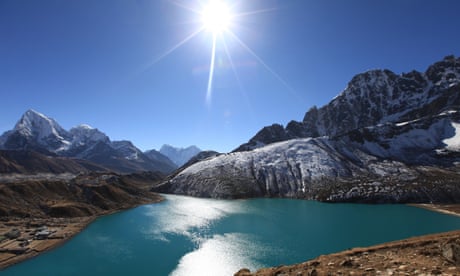 After Happer left the energy department feeling unfairly treated, he eventually became more involved with a movement convinced that world leaders were being duped by climate scientists. People he has worked with believe humans and their carbon dioxide pollution couldn’t possibly be causing worse droughts, fires and floods.

“He became very aware of the fact that these decisions were very political rather than scientific that were being made and still are,” said Patrick Moore, the chairman of the climate-crisis denying CO2 Coalition, which Happer helped start.

Moore compared Happer’s quest to scientists persecuted throughout history: Galileo, Darwin, Mandel and Einstein, who each “had to fight against a so-called consensus”.

In 2015, Happer co-founded the CO2 Coalition, a nonprofit that advocates for carbon dioxide, calling it “vital” to life on earth and important to crop growth.

The CO2 Coalition receives funding from the Mercer family, a top Trump donor that also gave more than $2m to organisations denying climate science in 2016. The group receives money from the billionaire conservative industrialists, Charles and David Koch too. CO2 Coalition representatives can often be found at conservative conferences, touting CO2 from small booths with pamphlets.

In 2017, when Happer was reportedly under consideration to be Trump’s science advisor, he sent a letter to a Jezebel reader arguing that the “demonization of CO2” “really differs little from the Nazi persecution of the Jews, the Soviet extermination of class enemies or ISIL slaughter of infidels”.

In a CNN-hosted debate with Bill Nye, Happer said: “There’s this myth that’s developed around carbon dioxide that it’s a pollutant, but you and I both exhale carbon dioxide with every breath.” He believes the gas is beneficial overall, because it helps plants grow.

Michael Bender, a Princeton geosciences professor, spoke with Happer several times and said he was cordial in interactions that did not concern man’s influence on climate.

“I think his reputation as a physicist has been very high for a long time … this is something I’ve heard from a number of physicists,” Bender said. But he added: “To me it seems like the important things are whether his views about climate science are rational and how he wants to exert influence.”