During his three-day state visit to the United Kingdom, President Trump had scheduled a 15-minute meeting about climate change with Prince Charles, a noted environmentalist.

The meeting went on for 90 minutes. And Trump, a noted climate change skeptic who once called global warming a “Chinese hoax,” was apparently unmoved.

“I believe there is a change in weather, and I think it changes both ways,” Trump told Piers Morgan in an interview that aired on “Good Morning Britain” Wednesday. “Don’t forget, it used to be called global warming; that wasn’t working, then it’s called climate change, and now it’s called extreme weather.”

Trump cited the recent spate of deadly tornadoes in the United States. The president argued that the country has seen extreme weather before.

“Forty years ago, we had the worst tornado binge we’ve ever had,” Trump said. “In the 1890s, we had our worst hurricanes.” 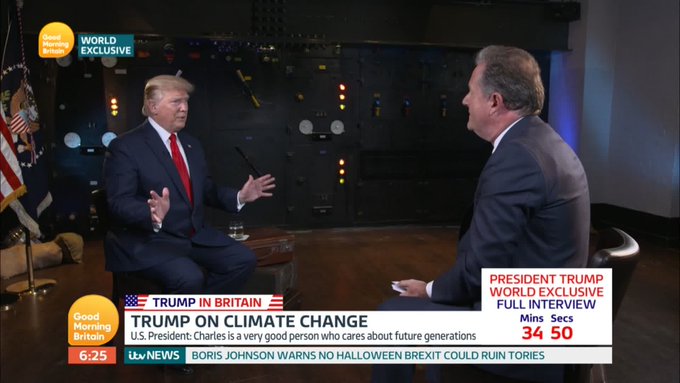 Does the US President believe in climate change?

Trump says he discussed climate change with Prince Charles, who he believes is ‘a very good person’ who ‘wants to have a world that’s good for future generations’.

The effect of climate change on extreme weather events is still being debated by climate scientists. But there is virtually unanimous consensus about the fact of rising global temperatures, the melting of glaciers and sea ice, and the rise in ocean levels, all of which are projected to have serious and potentially catastrophic effects in future decades.

The president said that during the meeting, Charles “did most of the talking.”

“He is really into climate change, and I think that’s great,” Trump said. “He wants to make sure future generations have climate that is good climate as opposed to a disaster. And I agree.”