Study: Green New Deal Would Have ‘No Effect’ On Earth’s Climate

by Rusty Weiss And Jeff Dunetz | 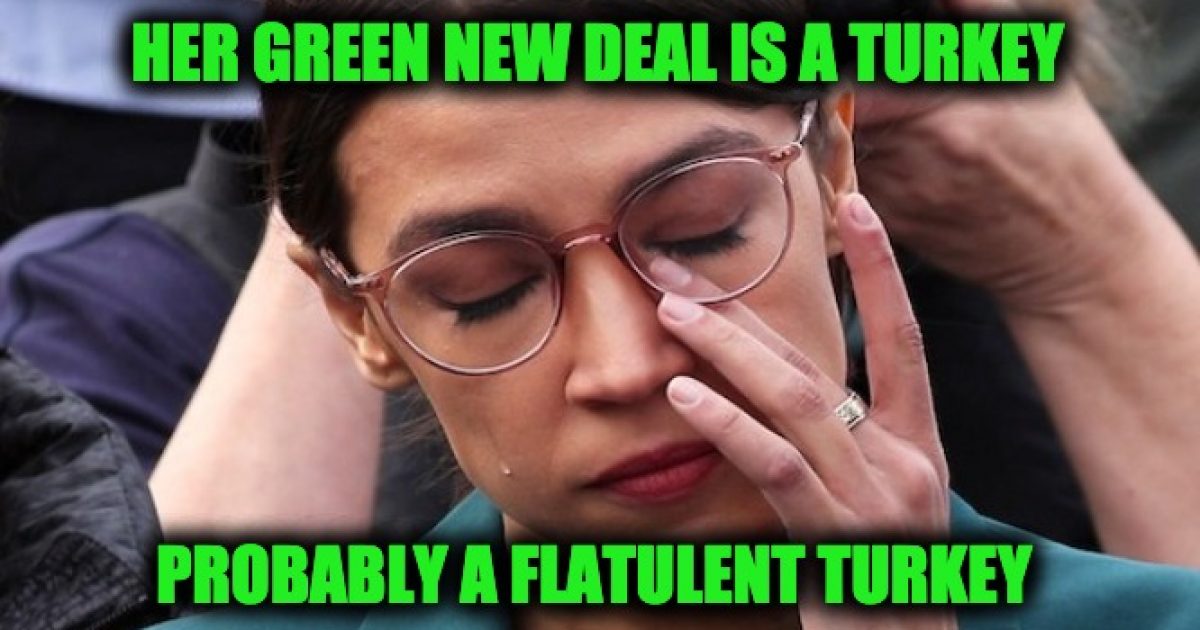 A new study published by the American Enterprise Institute (AEI) disputes the idea that the Green New Deal would have any effect on the environment, concluding that the impact would be minimal at best.

The environmental pipe dream brought to you by the Democrat party’s rising socialist,  Alexandria Ocasio-Cortez, would abolish fossil fuels, eliminate millions of jobs, cost households $600,000 annually at an overall price tag of $93 trillion, and do nothing to stem the tide of climate change.

“Notwithstanding the assertions from GND [Green New Deal] proponents that it is an essential policy to confront purportedly adverse climate phenomena,” the report reads, “the future temperature impacts of the zero-emissions objective would be barely distinguishable from zero.”

That’s just a more delicate way of saying Zero, which by the way is barely distinguishable from AOC’s IQ.

The AEI also concluded that the Green New Deal’s “central premise” of depleting America’s energy-producing natural resources (oil and gas) and using other green energy sources to create jobs and increase the economy “is not to be taken seriously.”

NEW: Green New Deal Would Have NO Effect on Climate!

“B/c the US only accounts for a fraction of global greenhouse gas emissions, zero emissions would only cut future temps by 0.083-0.173 degrees Celsius by 2100”

Report: Green New Deal Would Have ‘No Effect’ on Climate

The Green New Deal would have essentially no effect on global warming, a new report argues, while imposing enormous economic and social costs.

It may seem easy to point and laugh at the chief proponent of the GND, AOC. After all, she has claimed the policy is necessary because the world will end in 12 years (which if you believe her is a great reason to get a 13-year balloon loan) and compared the fight against climate change to World War II.

Twelve-years? That is reminiscent of December 2008, and again in 2009, former Vice President Al Gore said that in the next 5-7 years the Arctic Ice cap will be gone entirely during some parts of the summer. Sadly for Al and his climate change enthusiasts, the opposite has happened. I would suspect that Gore has put the Arctic on his Christmas naughty list. On the bright side, I doubt very highly the former vice-president put coal in the stockings of anyone on his naughty list.

The blue line in the graph below shows that the Arctic Ice in 2018 was actually higher than the average of the past eleven years (black line).

Beyond the scaremongering by the former VP and the freshman member of Congress, there is a very long list of predictions of an environmental-caused end of the world since 1864.  The projections have become more frequent since the Climate Change hypothesis/international redistribution of income plan has become popular. My friend Marc Morano’s book “The Politically Incorrect Guide to Climate Change,” devotes an entire chapter to the long and silly history of climate tipping points, beginning in 1864!  But he gives a preview of the section on his site Climate Depot (which IMHO is the best site focusing on the truth about the climate change hypothesis),

But facts do not matter.  Because this a widely supported plan within the Democratic party, among both fringe and mainstream members.

Several 2020 Democratic presidential contenders are backing the plan, having clearly not read it, despite its staggering projected cost of $93 trillion and now having no real effect on the environment. It will, however, have a tangible impact on the economy–it will destroy it. Additionally, and despite its insanity, 92 House Democrats have co-sponsored the resolution.

In short, Democrats are trying to fleece taxpayers for the sole purpose of placating the radical environmental extremist voters in their party.

The AEI report notes that the GND’s social programs alone would cost $9 trillion annually – social programs which include government-run healthcare ($3.2 trillion), an employment guarantee ($680 billion) and so-called “free” college and family and medical leave ($107 billion). And since the economy will be toast, tax revenues will be way down,

“This study further solidifies the reality that the socialist Democrats and their insane policy proposals are a complete and absolute joke,” McAdams said in a statement.

Sadly, if a Democrat takes the White House in 2020 and tries to implement this “insane” legislation, the joke will have been on the American people. And it won’t be all that funny.

Parts of this post was first seen at Mental Recession