Wash Post: "It’s become increasingly clear that climate change has played a significant part in deepening the extreme poverty and insecurity that compels many to head north. According to the World Bank, climate change could lead to at least 1.4 million people leaving their homes in Mexico and Central America over the next three decades." For months, President Trump has tweeted and raged about the ongoing migration crisis along the U.S. southern border. His alarm over the continued influx of Central American migrant families seeking to claim asylum in the United States — and his government’s seeming inability to stop it — saw the White House carry out a dramatic purge last week of Homeland Security officials. By one estimate, if current trends continue, 1 percent of the entire population of Guatemala and Honduras may be apprehended along the U.S.-Mexico border this fiscal year.

The crisis feeds Trump’s campaign rhetoric about border security and the fecklessness of his political rivals, who he claims are content to let the nation be overrun by caravans of “invaders” from the south. Since he launched his campaign in 2015, he has cast the thousands of migrants arriving at the U.S. border as “aliens,” bearing drugs and spreading criminality.

Democrats must change the Immigration Laws FAST. If not, Sanctuary Cities must immediately ACT to take care of the Illegal Immigrants – and this includes Gang Members, Drug Dealers, Human Traffickers, and Criminals of all shapes, sizes and kinds. CHANGE THE LAWS NOW!

49.3K people are talking about this

In a nod to the president’s political base, Trump and top White House aides seek mostly hard-line punitive measures. After last year’s widely reviled family-separation policy proved too unpalatable, Trump now wants to dispatch potential asylum seekers at the border to Democratic-run “sanctuary cities” within the United States — a move that could be ruled unlawful for its implicit political vindictiveness. He also promised wholesale cuts to U.S. assistance to El Salvador, Honduras and Guatemala, the three “Northern Triangle” countries at the heart of the influx.

What Trump has spent far less time discussing are the driving forces of this current wave of migration — at least not the one whose very existence the president still disputes. But it’s become increasingly clear that climate change has played a significant part in deepening the extreme poverty and insecurity that compels many to head north. According to the World Bank, climate change could lead to at least 1.4 million people leaving their homes in Mexico and Central America over the next three decades.

Central America — where a third of all jobs remain linked to agriculture — is one of the more susceptible regions in the world to the long-term effects of a warming planet. Successive years of drought, extreme fluctuations in temperature and shifting rain patterns have led to failed harvests and forced many Central American farmers to forsake traditional crops.

A recent lengthy exposé by the New Yorker’s Jonathan Blitzer focused on the expanding “dry corridor” — a region in Central America marred by drought that stretches from Panama to the southern reaches of Mexico. Conditions are particularly acute in the highlands that link central Honduras to western Guatemala, where millions of subsistence farmers have seen their livelihoods ravaged not just by lack of rain, but also its excess — floods, landslides and hurricanes. Their plight has been compounded by woeful agricultural infrastructure and national governments that have few resources to help them.

President Trump has pivoted from closing the southern border to imposing new tariffs on Mexico. But who will be the most affected? (Luis Velarde/The Washington Post)

In 2016, the United Nations’ Food and Agriculture Organization estimated that at least 1.6 million people in Central America faced constant food insecurity because of climate change. In 2017, a survey of Central American migrant families conducted by the World Food Program found that nearly half had left their country because of a lack of food.

“There are always a lot of reasons why people migrate,” Yarsinio Palacios, an expert on forestry in Guatemala, told Blitzer. “Maybe a family member is sick. Maybe they are trying to make up for losses from the previous year. But in every situation, it has something to do with climate change.”

“They usually don’t go after the first drought,” Stephanie Leutert, director of the Mexico Security Initiative at the University of Texas at Austin, told Time magazine. “But when the drought comes back” and they are out of savings, they have to do something.

In Honduras and Guatemala, climate change is seen as a major factor in outbreaks of “coffee rust,” a fungal disease that flared acutely more than half a decade ago and continues to disrupt the cultivation of a mainstay crop of local economies. “The weather is crazy,” Carlos Peña Orellana, a Honduran coffee farmer who was making do in part with remittances sent by his children from the United States, told the New York Times earlier this month. “Everything’s out of control.”

“The economy of the western highlands is heavily dependent on coffee farming, an industry that has suffered in recent years because of low global coffee prices and poor harvests linked to below-average rainfall,” my colleagues reported last year from Guatemala. “The industry is still recovering from coffee rust outbreaks that began in 2013. A growing number of Guatemalans have lost hope that the industry might soon rebound.”

Experts note that this all feeds into the logic propelling the migrantstoward the U.S. border. When poor people are displaced by climatic factors, they first migrate to cities within their countries. That’s where many in Central America fall prey to the abuse and influence of gangs and criminal networks.

The broader structural problems — related to poor governance and a fundamental lack of resources — aren’t going to vanish overnight. But they’ve also been known for quite some time. A 2012 report from the Inter-American Development Bank projected that Latin America and the Caribbean could face “annual damages in the order of $100 billion by 2050 from diminishing agricultural yields, disappearing glaciers, flooding, droughts and other events triggered by a warming planet.” 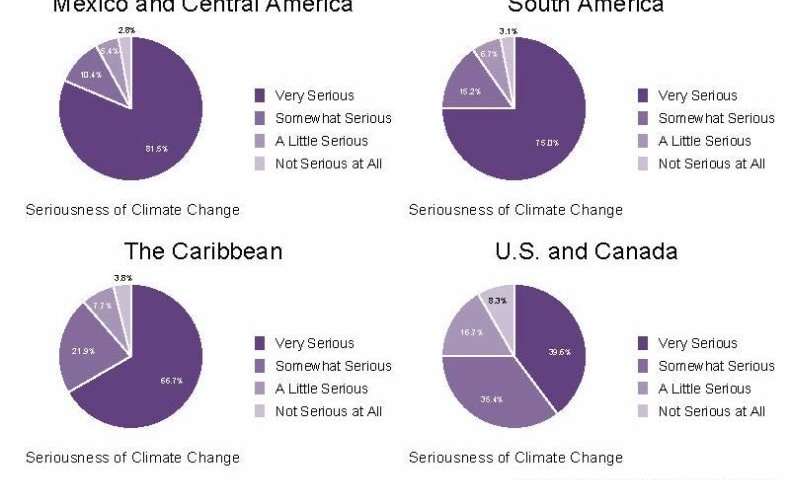 More than eight in 10 adults in Mexico and Central America believe climate change is a very serious problem for their country – more than twice the proportion of adults in the United States and Canada: http://bit.ly/2rFVnlH  via @physorg_com

Yet the Trump administration has ended funding for certain climate-related aid projects, including a number of programs operating in Central America. Contradicting the assessments of his own government agencies, the president has rewound the clock, battling against the scientific consensus on climate change rather than working more ambitiously toward its mitigation.

The irony is that no matter Trump’s grandstanding on the border, senior officials within his administration already recognize the deeper forces at play. Last year, Kevin McAleenan, then the head of U.S. Customs and Border Protection, went on a trip to the Northern Triangle to examine the profound food insecurity and other conditions affecting migration. (McAleenan is serving as the acting homeland security secretary.)

“Economic opportunity and governance play much larger roles in affecting the decision for migrants to take the trip north to the United States,” McAleenan told my colleague Nick Miroff in September, suggesting that these dire conditions were more significant drivers of migration than the daily threat of gang violence.

At the time, McAleenan called for “a sustained campaign that addresses both push and pull factors” as “the only solution to this crisis.” One wonders whether the president is listening.

Want smart analysis of the most important news in your inbox every weekday along with other global reads, interesting ideas and opinions to know? Sign up for the Today’s WorldView newsletter.

Important breaking news emails for major happenings around the world.

Ishaan TharoorIshaan Tharoor writes about foreign affairs for The Washington Post. He previously was a senior editor and correspondent at Time magazine, based first in Hong Kong and later in New York. Follow

Your support helps our journalists report news that matters.

Latest episode
Why banning fringe users doesn’t keep conspiracy theories off YouTube
Listen22:12
Unparalleled reporting. Expert insight. Clear analysis. Everything you’ve come to expect from the newsroom of The Post — for your ears.

Your support helps our journalists report news that matters.

Analysis on the most important global story of the day, top reads, interesting ideas and opinions to know, in your inbox weekdays.