An infrastructure bill would struggle to improve the country’s transportation network if it lacks language to address threats from severe weather events, the top Democrat on the Senate’s surface transportation panel said March 6.

“We must ensure that we are planning and designing transportation systems that are sustainable and resilient to increasingly severe weather and extreme weather events,” said Delaware Sen. Tom Carper, ranking Democrat on the Environment and Public Works Committee, during a hearing with proponents of infrastructure funding. Carper on the same day as the hearing introduced legislation that would authorize grants for promoting electric vehicle charging infrastructure. He stressed to colleagues and stakeholders that the transportation sector is a major contributor of greenhouse gas emissions.

Carper is not alone in championing infrastructure resilience policies, which have a chance of adoption in broad legislation this spring. Fellow Senate Democrats, including Massachusetts’ Ed Markey, continue to raise the alarm about the effects of human behavior on the climate. 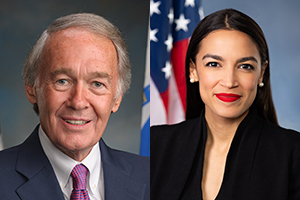 In February, Markey and Rep. Alexandria Ocasio-Cortez (D-N.Y.) unveiled the Green New Deal proposal, which is meant to transform the country’s transportation system. The goal is to minimize the collective carbon footprint nationwide within 10 years.