Thousands of schoolchildren and young people in the UK are taking part in climate strikes with the support of a former UN climate chief, who said it was “time to heed the deeply moving voice of youth”.

Christiana Figueres, who led the historic 2015 Paris agreement, said the fact that children were so worried about their future they were prepared to strike should make adults take urgent action.

“It is a sign that we are failing in our responsibility to protect them from the worsening impacts of climate change,” she said.

Initial reports suggested thousands of children walked out of lessons in protest at the mounting ecological crisis, with several hundred congregating in Brighton and Oxford by mid-morning, and more than 1,000 gathering in Parliament Square in London.

Organisers said action was planned in at least 60 towns and cities across the UK from Cornwall to the Scottish Highlands in an attempt to force politicians to tackle growing environmental problems.

Anna Taylor of the UK Student Climate Network, which helped coordinate the action, said: “We’re running out of time for meaningful change and that’s why we’re seeing young people around the world rising up to hold their governments to account on their dismal climate records.

“Unless we take positive action, the future’s looking bleak for those of us that have grown up in an era defined by climate change.”

The movement started in August when Greta Thunberg, a 16-year-old schoolgirl, held a solo protest outside the Swedish parliament. Now, up to 70,000 schoolchildren each week hold protests in 270 towns and cities worldwide. 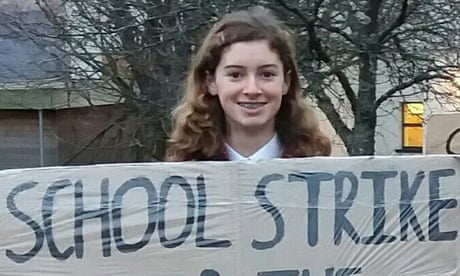 ‘I feel very angry’: the 13-year-old on school strike for climate action

Individual protests have previously been held in the UK, but the nationwide action on Friday is the first coordinated walkout.

The latest UN report warned there were 12 years remaining to avoid the worst effects of global warming, from record-breaking droughts and heatwaves to warming oceans and melting ice sheets.

Students in the UK are calling on the government to declare a climate emergency, communicate the severity of the ecological crisis and change the curriculum to make the state of the environment an educational priority.

They also want recognition that young people have the biggest stake in the future and should therefore be involved in policymaking, and are demanding that the voting age be lowered to 16.

Earlier this week, more than 200 academics, including almost 100 professors, backed the strike, saying the “tragic and desperate facts” of the unfolding climate emergency and the lack of meaningful action by politicians left young people with little option but to take matters into their own hands.