He also called the prospect of the Sahara spreading into Europe preposterous.

The Green Past of the Sahara

Stefan Kröpelin geographer and geologist who, after his training at the Free University of Berlin, has been working at the Institute for Prehistory and Early History in Cologne since 1995. He is one of the most renowned expedition researchers in the field of “Climate, Cultural, and Landscape Change in Arid Africa,” and is best known for his scientific travels to Sudan and Chad. In his career he has undertaken about 60 expeditions, which have been presented in numerous popular science TV programs.

Sahara once a paradise

In his lecture, Dr. Kröpelin first gave an overview of the Eastern Sahara located in Sudan, Chad, Libya and Egypt. The region is the driest place on planet Earth today. But thanks to natural climate change over the millennia, this has not always been the case. On the contrary: if you think of the Hungarian researcher László Almásy, known from the book and film “The English Patient”, who discovered “swimmers” on cave paintings in Eastern Sahara as early as the 1930s, you know that the area was once a paradise.

Explorer Kröpelin was able to confirm Almásy’s assumptions through his work – and even add an almost unbelievable fact.

The paradisiacal humid conditions in the east of the Sahara prevailed between about 8,500 and 5,300 B.C., i.e. after the last Ice Age and at the beginning of the Neolithic, when higher temperatures led to frequent rainfalls, and thus raised the groundwater level considerably, and allowed surface waters and rich vegetation.

As a result of the gradual drying up of the region over the last 7,000 years, the human inhabitants migrated south to present-day Sudan or later to Egypt, where they founded the Earth’s first advanced culture on the Nile with its fertile floods.

Video of Dr. Stefan’s lecture on the slow drying up of the Sahara on the occasion of the 12th IKEK in Düsseldorf in November, 2018

The slow drying out of the Sahara was caused by a successive cooling of the climate, analogous to the formation of savannahs through warming. Interestingly, today’s Sahara desert does not have the dimensions it had during the maximum of the last ice age about 20,000 years ago. At that time, the desert extended hundreds of kilometres further south into today’s Sahel zone.

Lake sediment, cave paintings unlock secrets of the past

How could Dr. Kröpelin reconstruct climate events in North Africa over the millennia? What natural climate indicators does the region offer?

One of the best sources of climate data are the deposits at the bottom of the largest lake in the Sahara, Lake Yoa in the oasis of Ounianga in north-eastern Chad, from which as much water evaporates every day as the city of Cologne consumes every day.

The loss is compensated by the abundant fossil groundwater resources. But it is not only hidden data deep in the ground that are suitable for precisely reconstructing the past of the climate in the last decades – the human settlement of the region and its legacies are also a reliable climate indicator. Particularly impressive in this context are the aforementioned cave paintings, which were able to withstand the sandstorms and the heat surprisingly well. These prehistoric works of art were not made in a short time, but over thousands of years. The depicted objects like the floating people or cattle herds stand for different phases of the colonization.

The proven gradualness of climate change at that time contradicts the “Tipping Point” catastrophe theory, which predicts a “climate collapse” with drastic changes in the environment in only one human generation. In fact, Kröpelin’s research shows that climate change in the Sahara has been so slow that people have hardly noticed anything about it during their lifetime.

Stefan Kröpelin also refers in this context to the political use of the current climate catastrophe theory, which is even misused for mass immigration policy.

The exponential increase in the world population over the next 50 years is the real problem facing our civilization. 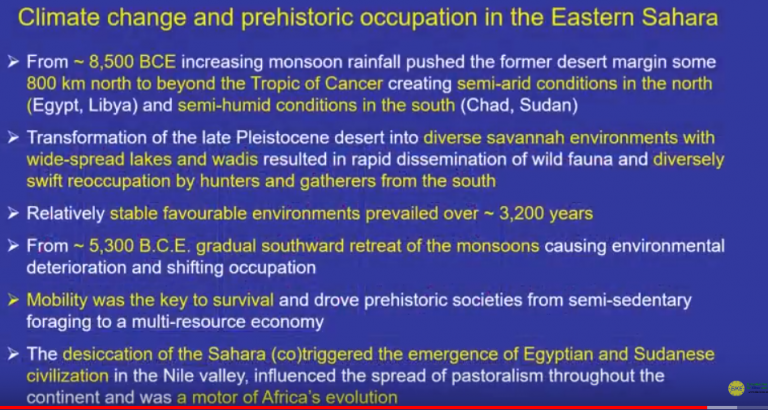