Delingpole: Michael ‘Hockey Stick’ Mann Invites You to Sniff His Dirty Linen – ‘Released a batch of his old emails’

The discredited “climate scientist” and fake Nobel-prizewinner has released a batch of his old emails, which you can access here.

Mann gives a defiant account of his decision at the Soros-funded global warming propaganda site DeSmogblog.

By releasing his emails, Mann claims, he will be:

(a) using these emails to show how scientists are making an honest and diligent effort to understand the science underlying Earth’s climate system,

(b) showing how scientists are engaged in the good-faith give-and-take that is central to the scientific enterprise, which includes appropriate skepticism and critical assessment not only of other scientists’ work but our own, as evident through internal deliberations between the scientists, and

(c) demonstrating the understandable frustration that scientists have with those who intentionally misrepresent them and their research for the purpose of advancing an ideological agenda.

But actually, no, it’s none of those things. He’s doing it because he’s going to have to anyway. Energy and Environment Legal Institute has been trying for years to get the University of Virginia to release Mann’s old emails from the six years he spent there as a professor. That’s because E & E believes, not unreasonably, given Mann’s snout-deep involvement in the Climategate scandal, that the emails may shed light on the nefarious activities of the activist scientists at the heart of the Climate Industrial Complex.

Mann is releasing the emails pre-emptively in order to cast himself in a good light. Unsurprisingly, he has only released a portion of his total correspondence. Some have been redacted, some have attachments missing, some have been held back completely because reasons…

Still, it’s not looking good for Mann. There’s nothing as yet to rival the skullduggery exposed in Climategate. But what we see pretty clearly is Mann torturing his dubious data till it screams and becoming very defensive when questioned.

Here is one of his colleagues having conniptions about Mann’s methodology: 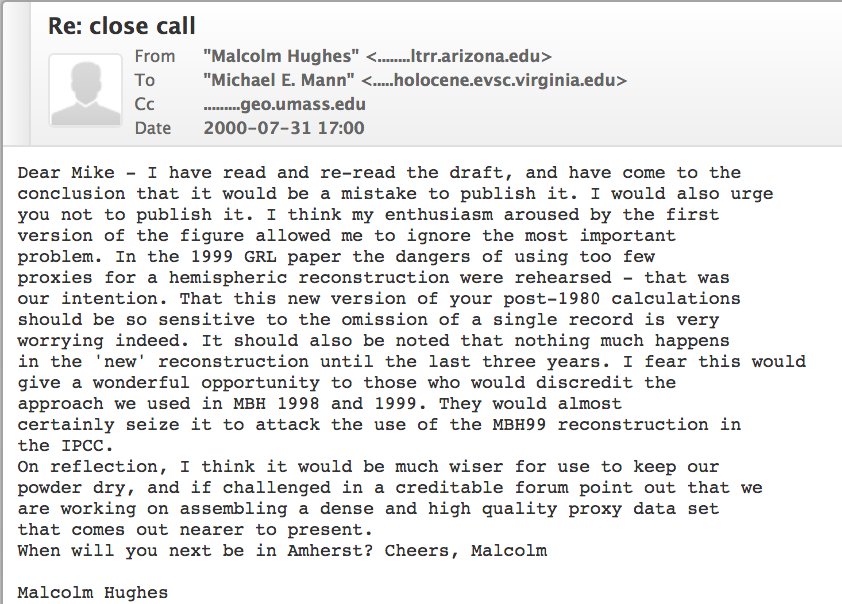 #MannEmail 39, Hughes: “In 1999 GRL paper the dangers of using too few
proxies for a hemis. reconstruction were rehearsed – that was
our intention. That this new vers. of your post-1980 calculations
should be so sens. to the omission of a single rec. is very
worrying indeed”

Here is Mann admitting to having adjusted his data post hoc in order to give the correct, alarmist narrative: 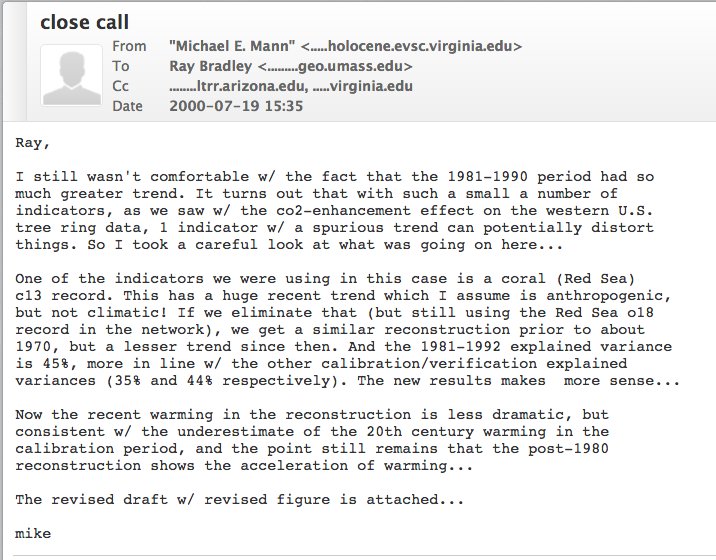 “close call”: #MannEmail 34, July 2000: “It turns out that with such a small a number of indicators, as we saw w/ the co2-enhancement effect on the western U.S. tree ring data, 1 indicator w/ a spurious trend can potentially distort things”

Here is another of his colleagues, starting to panic that maybe the evidence for man-made global warming theory is already (in 2000) looking shakier than they’d like:

#MannEmail 43, Mike Manton: “The relatively strong NEGATIVE correlation with CO2 is a little disturbing (as is noted by the authors), and makes one wonder if it is some statistical anomaly”

This was one of the great revelations of the Climategate emails, and it’s now reinforced here: the experts at the very heart of the global warming establishment – the ones whose “science” and data forms the basis of the $1.5 trillion a year global climate change industry – are just a bunch of clueless amateurs completely out of their depth.

I’ll keep you posted if any more interesting snippets emerge – those that Mann hasn’t already “accidentally” deleted, of course.