Despite the warm year seen in Central Europe so far this year, and all the claims that it’s due to climate warming, the globe in fact has shown it’s been cooling off, or at least not warming at all.

So far 2018 is the third year in a row that the globe has cooled off from it’s El Nino peak set in 2015. Especially large parts of North America have seen a cold October, as an NCEP/NCAR reanalysis shows:

Arctic stable over past decade

And despite earlier predictions of an ice-free late summer Arctic made by alarmist climate scientists years ago, Arctic sea ice has in fact stabilized over the past 10 years. This year theNorthwest passage was closed the entire year.
Arctic sea ice extent has exploded since early November, gaining over 200,000 km² daily on average, as depicted by the following Alfred Wegener Institute (AWI) chart:

This is the second year in a row that freeze-up of Western Hudson Bay ice has come earlier than average” and that “it’s unlikely that a strong wind will again blow the newly-formed ice offshore (as happened earlier this year) because the ice is more extensive.”

According to Dr. Crockford: “Ice has been developing rapidly over the last couple of days.” 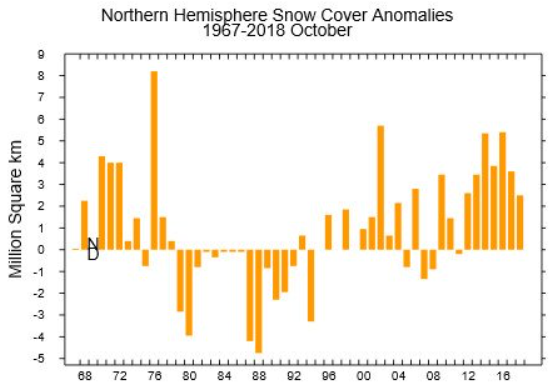