Observations from two new papers undermine the narrative that says recent and future warming may be dangerous and undesirable. Scientists have determined that (1) people are far more likely to die from exposure to cold temperatures than hot temperatures, and (2) deaths attributed to excessive heat have been on the decline for decades in nearly all countries studied. Given these observations, a justifiable conclusion could be that global warming is beneficial to humanity and attempts to mitigate future warming may serve to educe more human deaths, not less.

A groundbreaking 2015 study analyzing 74 million deaths from 384 locations across the world revealed that cold weather killed 20 times more people than hot weather did between 1985 and 2012.

In India, the fraction of deaths attributable to moderately cold weather was 42 times higherthan deaths attributed to “extremely hot weather” according to a comprehensive analysis by Fu et al. (2018).

Mortality attributable to hot and cold

“We applied distributed-lag nonlinear models with case-crossover models to assess the effects of heat and cold on all medical causes of death for all ages from birth (n = 411,613) as well as on stroke (n = 19,753), ischaemic heart disease (IHD) (n = 40,003), and respiratory diseases (n= 23,595) among adults aged 30–69. We calculated the attributable risk fractions by mortality cause for extremely cold (0.4 to 13.8°C), moderately cold (13.8°C to cause-specific minimum mortality temperatures), moderately hot (cause-specific minimum mortality temperatures to 34.2°C), and extremely hot temperatures (34.2 to 39.7°C). We further calculated the temperature-attributable deaths using the United Nations’ death estimates for India in 2015. Mortality from all medical causes, stroke, and respiratory diseases showed excess risks at moderately cold temperature and hot temperature. For all examined causes, moderately cold temperature was estimated to have higher attributable risks (6.3% [95% empirical confidence interval (eCI) 1.1 to 11.1] for all medical deaths, 27.2% [11.4 to 40.2] for stroke, 9.7% [3.7 to 15.3] for IHD, and 6.5% [3.5 to 9.2] for respiratory diseases) than extremely cold, moderately hot, and extremely hot temperatures.”

“In 2015, 197,000 (121,000 to 259,000) deaths from stroke, IHD, and respiratory diseases at ages 30–69 years were attributable to moderately cold temperature, which was 12- and 42-fold higher than totals from extremely cold and extremely hot temperature, respectively. The main limitation of this study was the coarse spatial resolution of the temperature data, which may mask microclimate effects.”

“We demonstrate that cold temperatures contributed to higher attributable risks of mortality than hot temperatures in India during 2001–2013, consistent with previous findings based on nonlinear temperature–mortality associations drawn from mostly high-income countries [2]. These previous findings reported an overall attributable risk of 7.29% (eCI 7.02 to 7.49) for cold temperature and 0.42% (0.39 to 0.44) for hot temperature, which are similar to our results for all ages. Among countries, our results are most comparable to those of Australia.”

In 9 of 10 Countries Studied, Heat-Related Deaths Stable or Declining

Of the ten, 7 countries recorded declines in heat-related deaths since the 1980s, two remained stable (UK and Brazil), and just one country had an increase in heat-attributable deaths (Australia).

For good measure, Vicedo-Cabrera et al. (2018) also found that “cold temperatures exhibit larger attributable mortality (above 5%) compared to heat (around or below 1%) in all countries“.

A multi-country analysis on potential

adaptive mechanisms to cold and heat

in a changing climate

“Table 1 summarizes the mortality and temperature data from the 305 locations distributed in 10 countries included in the study [during 1980s-2000s] (see also Table S2 in the Appendix). The data included nearly 75 million deaths, and countries contributed an average of 20.5 years to the time series data, ranging from 14 years (Brazil) to 27 years (Japan). Heat-related AFs decreased in all countries (ranging from 0.45–1.66% to 0.15–0.93%, in the first and last 5-year periods, respectively) except in Australia, Ireland and UK. Different patterns were found for cold (where AFs ranged from 5.57–15.43% to 2.16–8.91%), showing either decreasing (Brazil, Japan, Spain, Australia and Ireland), increasing (USA), or stable trends (Canada, South Korea and UK). Heat-AF trends were mostly driven by changes in exposure-response associations due to modified susceptibility to temperature, whereas no clear patterns were observed for cold.”

“Cold temperatures exhibit larger attributable mortality (above 5%) compared to heat (around or below 1%) in all countries.”

“Our results suggest that the gradual reduction in heat-related impacts can be mostly attributed to the attenuation in the exposure-response curve, as discussed in previous studies (Barreca et al., 2016, Davis et al., 2003, Petkova et al., 2014). In fact, the reduction in heat-attributed mortality occurred despite the progressive shift of temperatures towards warmer temperature ranges observed during the last decades.”

“Cold-mortality impacts persisted throughout the study periods in most of the countries, although following different temporal patterns (Fig. S4). Canada, Japan, Spain, Switzerland, South Korea and the USA show a decreasing trend in heat-attributable AFs, from 0.45–1.66% in the first 5-year sub-period to 0.15–0.93% in the last 5-year sub-period. Heat impacts remained stable in UK and Brazil at around 0.2–0.4% and 0.6–0.7%, respectively, whereas it increased in Australia from 0.05% to 0.67%.” 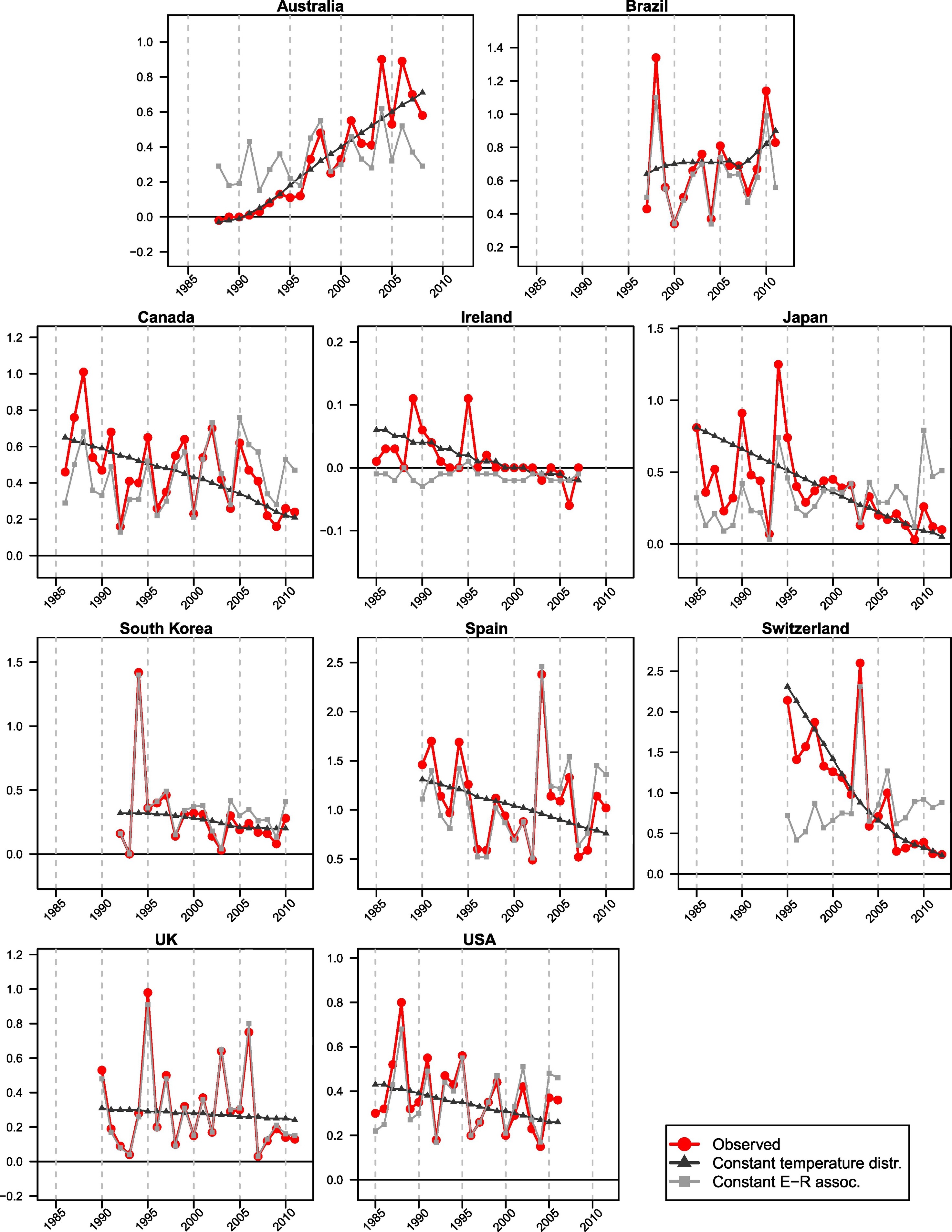 Considering (1) cold temperatures are far more deadly than hot temperatures, and that (2) heat-related deaths have been declining in recent decades, it is fair to conclude that humankind has existentially benefited from recent global warming.

It is also not a stretch to suggest that policy initiatives deemed to mitigate future warming may theoretically reduce human health benefits and facilitate higher early death rates.