A writer for the eco-friendly Grist tweeted, “The world’s top scientists just gave rigorous backing to systematically dismantle capitalism as a key requirement to maintaining civilization and a habitable planet.”

The United Nations’ Intergovernmental Panel on Climate Change is warning that the dire costs of climate change are going to be here sooner than we think.

The planet is close to reaching its alleged 1.5-degree Celsius warming threshold, and civilization only has 11 years to fix it.

Oh, yeah, and the solution is to tear down the global free-enterprise system responsible for human flourishing and raising levels of prosperity for billions of people.

Don’t take my word for it.

A writer for the eco-friendly Grist tweeted, “The world’s top scientists just gave rigorous backing to systematically dismantle capitalism as a key requirement to maintaining civilization and a habitable planet.”

If you are wondering what you can do about climate change:

The world’s top scientists just gave rigorous backing to systematically dismantle capitalism as a key requirement to maintaining civilization and a habitable planet.

I mean, if you are looking for something to do.

The world’s top climate scientists are about to announce that—without radical coordinated action—the world has locked in warming of at least 1.5°C.

Heroic efforts are now necessary to save the world from catastrophic climate change.
Be a hero.
Watch live: https://www.youtube.com/watch?v=12S3dKrxj7c … 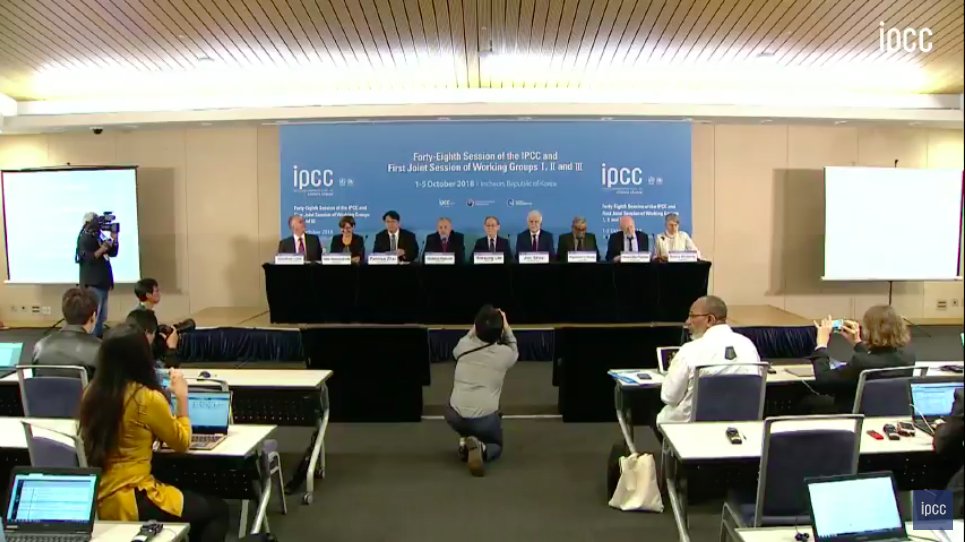 The Intergovernmental Panel on Climate Change report itself warns: “There is no documented historical precedent” for the transformation (aka de-development) necessary to curb global warming.

A senior U.N. environmental official says entire nations could be wiped off the face of the Earth by rising sea levels if the global warming trend is not reversed by the year 2000.

He said governments have a 10-year window of opportunity to solve the greenhouse effect before it goes beyond human control.

The reality is that, though the new Intergovernmental Panel on Climate Change report and proponents of dismantling the free-enterprise system have been shockingly honest in revealing their true intentions over the past few days, the sentiment is not new.

In fact, three years ago, U.N. Framework Convention on Climate Change Executive Secretary Christina Figueres made similar remarks in a push for the Paris Climate Accord.

Figueres said, “This is the first time in the history of mankind that we are setting ourselves the task of intentionally, within a defined period of time, to change the economic development model that has been reigning for at least 150 years, since the Industrial Revolution.”

The current economic development model that reigns supreme does so for compelling reasons.

People that freely exchange ideas and products, that have protection from government coercion and that have well-defined and protected property rights because of a strong rule of law have done quite well for themselves.

Eighty percent of all energy consumed by Americans comes from conventional sources, such as coal, oil, and natural gas. About 80 percent of the world’s energy needs are met by these natural resources, which emit carbon dioxide when combusted.

Levying a price on carbon dioxide will directly raise the cost of electricity, gasoline, diesel fuel, and home-heating oil. But the economic pain does not stop there.

When considering the impact of a carbon tax on individuals, it is important to note that carbon is intertwined in all parts of life. Energy is a necessary component for just about all of the goods and services consumed, so Americans would pay more for food, health care, education, clothes—you name it.

The latest Intergovernmental Panel on Climate Change report suggests policy proposals that would be economically cataclysmic.

It proposes a carbon tax of between $135 and $5,500 by 2030. A $5,500 carbon tax equates to a $50-per-gallon gas tax. An energy tax of that magnitude would bankrupt families and businesses, and undoubtedly catapult the world into economic despair.

Importantly, an extreme climate policy would also divert resources away from pressing environmental concerns, such as investing in more robust infrastructure to protect against natural disasters or new, innovative technologies that improve air and water quality.

Are those costs worth it?  After all, having wealth, health and affordable power don’t mean all that much if people don’t have a planet to live on. The Intergovernmental Panel on Climate Change estimates the climate costs could total $54 trillion without action.

But is there any new revelation in the scientific literature that makes climate doom imminent?

Not according to climatologist Judith Curry, a former chairwoman of the School of Earth and Atmospheric Sciences at the Georgia Institute of Technology.

Curry asserts that the main conclusion from the report is that “things would be a little better at 1.5C relative to 2C.”

Furthermore, she notes, “Over land, we have already blown through the 1.5C threshold if measured since 1890.

“Temperatures around 1820 were more than 2C cooler.  There has been a great deal of natural variability in temperatures prior to 1975, when human-caused global warming kicked in any meaningful way,” Curry said.

Another critical point Curry highlights is the fact that the Intergovernmental Panel on Climate Change largely disregards the lower thirds of likely climate sensitivity values between 1.5C and 4.5C.

There is a lot of scientific debate about equilibrium climate sensitivity within the climate literature, with a fair amount of uncertainty. And, as Curry mentions, “Much of this problem goes away if ECS is actually 1.5 to 2C.”

What about natural disasters? The University of Colorado’s Roger Pielke Jr., who specializes in analyzing extreme weather trends, emphasizes that “the IPCC once again reports that there is little basis for claiming that drought, floods, hurricanes [and] tornadoes have increased, much less increased due to [greenhouse gases].”

The Intergovernmental Panel on Climate Change’s politicization of policy actions presents another problem, and it is evident in the way the report treats nuclear energy.

Nuclear power provides nearly 60 percent of America’s carbon dioxide-free electricity, yet the climate panel engages in fearmongering about its expanded use. One would think that if climate change were an existential crisis, the world would need all the nuclear power it can get.

While the report acknowledges that any pathway to meeting carbon dioxide-reduction targets will include increased nuclear buildout, the report says more nuclear “can increase the risks of proliferation, have negative environmental effects (e.g., for water use), and have mixed effects for human health when replacing fossil fuels.”

Regardless of the cause, there are undoubted challenges from a changing climate.

Investing in coral-reef protection or in preparation for extreme weather events can be worthwhile. However, the combination of fearmongering and offering solutions that would require a takeover of the global economy are unrealistic and counterproductive.