‘This is my cry for help’ – 15-year old skips school for ‘climate strike’ – ‘Why should we be studying for a future that’s soon to be no more?’

“Some people say that we should be in school instead, but why should we be studying for a future that’s soon to be no more? And when no one is doing anything whatsoever to save that future?” Thunberg declared in a September 16, 2018 video statement. 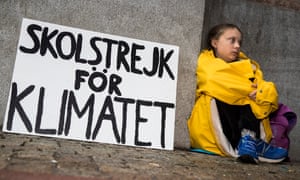 Thunberg added: “And what is the point of learning facts within the school system when the most important facts given by the finest science of that same school system clearly means nothing to our politicians and our society?”

She warned that “if everyone lived as we do [in Sweden] we would need 4.2 planet Earths per year” and she urged that we need to “start living within the planetary boundaries.”

Her school “climate protest” has caught the attention of the BBC, UK Guardian, Greenpeace, and many other organizations as the student seeks to expand her efforts. “We urge everyone to do the same wherever you are, to sit outside your parliament’s local government building until your nation is on the pathway to a below 2ﾟ[temperature] warming targets.”

As of September 28, 2018, Thunberg “continues her school strike for climate action. Opposite the Swedish parliament building in Stockholm.”

Fifteen-year-old Greta Thunberg describes herself as a “climate radical”

Greta Thunberg: ‘Our lives are in your hands’ – ‘This is my cry for help’

UK Guardian: The Swedish 15-year-old who’s cutting class to fight the climate crisis – “I am doing this because nobody else is doing anything. It is my moral responsibility to do what I can,” she says. “I want the politicians to prioritize the climate question, focus on the climate and treat it like a crisis.” … Thunberg’s protest might come as a surprise to anyone seduced by Sweden’s reputation as a climate pioneer and champion of the environment. This year the country enacted “the most ambitious climate law in the world”, aiming to become carbon neutral by 2045 and comfortably beating the 2015 Paris climate targets along the way.

“This is too little too late, it needs to come much faster,” Thunberg says. “Sweden is not a green paradise, it has one of the biggest carbon footprints.” Her parents want her to give up her protest and go back to school. “My teachers are divided,” Thunberg says. “As people they think what I am doing is good, but as teachers they say I should stop.” … Thunberg’s own awakening to the climate crisis a few years ago caused upheaval in her family. Her mother, the well known opera singer Malena Ernman, has given up her international career because of the climate effects of aviation. “Greta forced us to change our lives,” says her father Svante. “I didn’t have a clue about the climate. We started looking into it, reading all the books – she has read them too.” … Her teachers were telling her to turn off the lights and save paper, then flying off to New York for a holiday. For Greta, this was just not good enough: “Everyone believes that we can solve the crisis without effort, without sacrifice,” she wrote in an article widely circulated on social media and translated into English.

Greta has Asperger’s syndrome, which in the past has affected her health, he says. She sees her condition not as a disability but as a gift which has helped open her eyes to the climate crisis. “The best thing about my protest has been to see how more and more people have been coming and getting involved,” Greta says. “I don’t care if I get into trouble at school. I believe that one person can make a difference.” 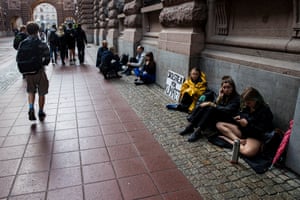