The Washington Post says Florence will be the first category 4 hurricane to hit the Carolinas, and it is President Trump’s fault.  They also say there is no reasonable doubt (evil) humans are priming the Earth for disasters. If Trump cares about Hurricane Florence, his policies don’t show it – The Washington Post

As is almost always the case, the fake news Washington Post is simply making up fake facts.  The east coast was hit by three major hurricanes in 1954, including the last two to hit New England (Carol and Edna.) The third major hurricane of 1954 (Hazel) was a category 4, which made landfall at the North/South Carolina border, and then wreaked havoc all the way up into Canada where it killed more than 100 people.  Hazel was Canada’s deadliest hurricane. According to Roger Pielke Jr., east coast major hurricanes are down more than 60% over the past 50 years. The US is just coming off the longest hurricane drought on record. 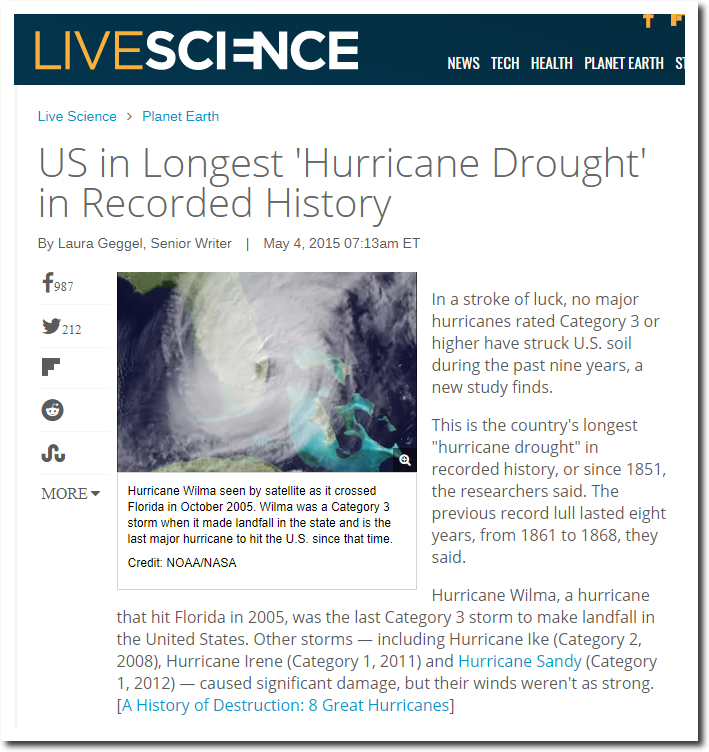 US in Longest ‘Hurricane Drought’ in Recorded History

If the Washington Post wants to blame presidents for hurricanes, then the top three perpetrators are Grover Cleveland, Rutherford B. Hayes and William Howard Taft. There is no factual basis to anything the Washington Post said, but why should this article be any different from anything else they publish? The mainstream media censors dissent, refuses to debate, and relies on anonymous sources. By following these policies, they never have to face any scrutiny for their fraud, lies and incompetence.